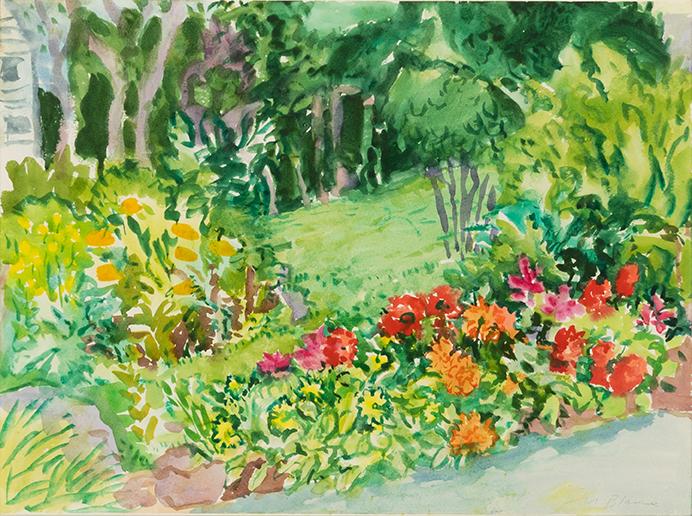 Nell Blaine's "Dahlias" is on view at the Drawing Room Gallery in East Hampton.
By Mark Segal

Next at Pace Gallery
"Champions," a group exhibition of work by modern and contemporary artists, is on view at the Pace Gallery in East Hampton through Aug. 2. The show takes its title from a featured work by Beatriz Milhazes, a renowned Brazilian artist whose work was included in the 50th Venice Biennale.

Figuration at Drawing Room
"Painting Place," an exhibition of work by Nell Blaine, Jane Freilicher, Fairfield Porter, and Albert York, will open tomorrow at the Drawing Room in East Hampton and continue through Aug. 31. The four influential painters, who came of age in the middle of the last century, favored figuration at a time when abstract action painting was a dominant force in the work of their contemporaries.

Inspired by their immediate surroundings, they painted intimate interiors, rural backyard views, and dramatic East End vistas. Their evocations of place are an enduring contribution to the legacy of 20th-century American painting.

New Venue for Art and Design
Ethan Abramson has opened Show-Room, a gallery space that will bring together his custom furniture designs, light fixtures by Blueprint Lighting, and, in collaboration with Scott Bluedorn of Neoteric Fine Art, work by a dozen East End artists. Located in an industrial bay at 211 Springs-Fireplace Road, the space is open by appointment only, with mandatory online booking at ethanabramson.com/show-room.

Streeter Portraits in Sag
"The Age of Allure," a solo show of portraits by Sabina Streeter, will open at the Eastville Community Historical Society in Sag Harbor on Saturday, with a reception beginning at noon.

Ms. Streeter, who lives in Sag Harbor, was invited by Georgette Grier-Key, the society's director, to create a series of portraits of 19th-century Black and Native American residents of the Eastville community. The images are based on tintypes found beneath the floorboards of the former studio of the photographer W.G. Howard.

Book Signing at Keyes Art
Keyes Art in Sag Harbor will celebrate the publication of "Hamilton: Portraits of the Revolution," a new book by Josh Lehrer, a fine-art photographer, with a book signing tomorrow at 6 p.m. Mr. Lehrer shot more than 100 portraits of the play's cast members using a Petzval lens. Invented in the 1840s, the lens requires long and slow exposures.

The gallery will have available for sale a selection of framed signed portraits from the book, including those of Leslie Odom Jr., Daveed Diggs, Phillipa Soo, Renee Elise Goldsberry, and Lin-Manuel Miranda, who also contributed the book's foreword.