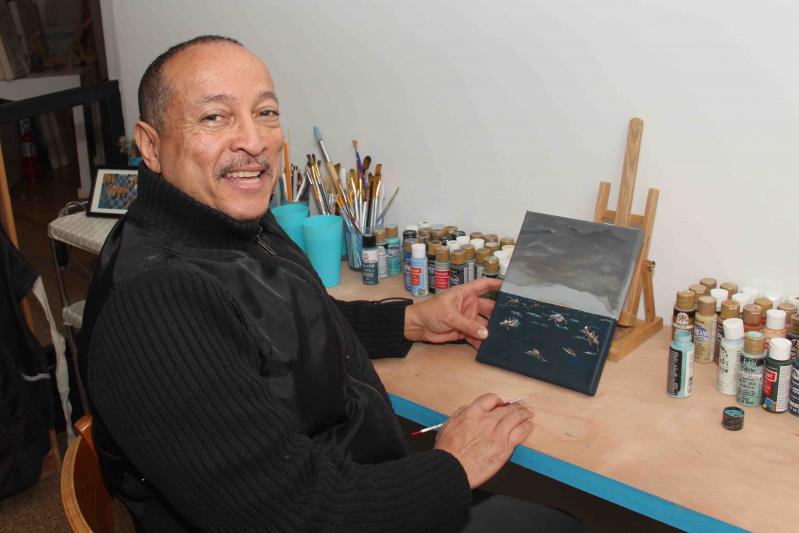 As we emerge from a dark and lonely spring to find the region in the throes of a full-on "Hamptons summer," some continue to behave much as they did before and during the quarantine. Artists such as Michael Butler often work in isolation, and, while they enjoy the company of others, their reflexive nature is often to be alone.

During a conversation at his Sag Harbor studio in early March, Mr. Butler discussed his participation in the exhibition "TAKEOVER 2020! Artists in Residence" at the Southampton Arts Center, which had opened on Feb. 1.

"Artists tend to isolate, and it's good to be out there," he said. " 'TAKEOVER' is an amazing experience. It's so nice to meet other artists. I said to them the other day I'm like a vampire. I'm feeding off their energies."

Two weeks later, the show of 10 artists, each given studio space at the museum in which to work and interact with one another and the public, shut down. It reopened on June 18.

Mr. Butler "went into deep, deep self-isolation mode." He has a twin brother who lives in Brooklyn, "and he did come down with Covid-19. We're very close, and we couldn't even get together." His brother recovered, and Mr. Butler went into Brooklyn last week to bring him out to Sag Harbor.

While some artists became even more productive than usual during the quarantine, Mr. Butler managed to produce only one painting. "I was doing other things," he said, including working in the garden, riding an exercise bicycle that had been sitting idle for more than a year, and repainting the living room.

When the exhibition reopened, he told Amy Kirwin, the arts center's artistic director, that he had other commitments and had to pass on returning to his satellite studio there.

Mr. Butler, who is self-taught and describes himself as a "narrative folk artist," has been painting since the 1970s. Unlike outsider artists, who are also self-taught, he is knowledgeable about art and art history, has exhibited widely for more than 30 years, and for a time directed an art gallery in Sag Harbor.

Among the artists whose work he admires are Henri Rousseau, Aaron Douglas, Romare Bearden, and Jacob Lawrence. A trip to the Dominican Republic in the early 1980s also inspired him. "I saw a lot of Haitian artwork when I was there. I like bold, bright colors, and I also like the repetitive images you sometimes see in Haitian paintings."

Mr. Butler draws on mythology, religion, dreams, and stories he has heard. "I also try to document historical things that there are no depictions of. I've done some characters who lived in Eastville," the Sag Harbor neighborhood that, from the early 1800s until the mid-1900s, was home to a multi-ethnic population of free blacks, Native Americans, and European immigrants.

His father's family began to summer in Eastville in the early 1920s, and his mother's family came there in 1930. They purchased a number of small cottages, one of which is Mr. Butler's home today. "Like a lot of kids, I didn't like being away from my friends. Once I got here, I'd get adjusted, but sometimes the only thing to do was go to the beach every day."

Mr. Butler was born on Staten Island and raised in St. Albans, Queens. He moved to Brooklyn when he was 22. He attended SUNY Brockport, then finished his undergraduate studies at York College in Queens. He earned a master's degree in public administration from Baruch College.

While he always had an interest in painting, it was not until 1988, when he moved to Sag Harbor year round, that he determined to focus exclusively on art. "But reality came around after about six months, and I started looking for a full-time job."

Before moving east, he was employed as a mortgage analyst for the New York City Department of Housing Preservation and Development, which develops and maintains the city's affordable housing. Once here, he worked for 13 years for Catholic Guardian Services as a recreational therapist and service coordinator for developmentally disabled adults, and afterward for East Hampton Town, first coordinating its family resource center and then managing the program at the East Hampton Senior Center. That job was followed by a three-year break. "But then, because artists can isolate very easily," he searched again for paid employment and spotted an ad for a job at the Sag Harbor Whaling Museum.

"I had met Barbara Lobosco, who at the time was president of the museum's board, some years before. When I went to be interviewed by her and Greg Therriault, who was the manager at the time, she said, 'Oh, I know Michael, don't even ask him any questions, just hire him.' " He was at the museum for seven years, working his way up from running the gift shop to managing the museum after Mr. Therriault left. He retired last October.

While Mr. Butler's art has always been rooted in representation and narrative, it has evolved over the years. Early on he worked in pastels, "but the pastels just didn't get the definition that I like to get. My paintings are very fine, very detailed, and with pastels that's difficult, although I like the blending of pastels. Then I went to oils, which take too long to dry. With acrylics, I found my happy medium."

During a show of his paintings at the Whaling Museum a few years ago, some viewers said his work had become more sophisticated. "I wasn't sure how to take that. I wasn't sure that I liked my work changing."

In 1990 he gave two friends a painting he made of their wedding. "A good friend of mine, Beverly Wiggins Wells, a poet who moved to Florida, was always getting on my case. 'You gave your best painting away. When I turn 75, I want you to paint me that same painting.' So I did. She turned 75 two years ago."

"When I look at the two, there's a difference in my style. The images in the more recent one seem sharper and crisper. I can see there is a distinct difference, and I like both styles. If I were to try to go back and recreate what I was doing in the past, I think it would be inauthentic. My style has changed, and I think I just have to keep moving forward with that."

As if work and art haven't kept him busy enough over the years, Mr. Butler has been deeply involved in his community. He was on the board of the Eastville Historical Society for many years, including three years as its president, and chaired the society's cemetery preservation committee, which has been restoring the community's graveyard, established in 1857, after many years of neglect. The cemetery is just down the block from his house, next door to St. David A.M.E. Zion Church, which dates from 1840.

"As much as I wanted to get involved in the recent Black Lives Matter demonstrations," Mr. Butler said, "I think it's impossible to maintain the six-foot distance in those circumstances, so I didn't attend any. I've been aware of those issues for years. I have read Ta-Nehisi Coates's articles and Michelle Alexander's 'The New Jim Crow,' and it does get the blood boiling."

He is a member of the East Hampton Anti-Bias Task Force, as are the town and village police chiefs. "I find them to be very personable, very responsive," he said. "But I know prejudice does exist out here. I don't have my head in the sand."