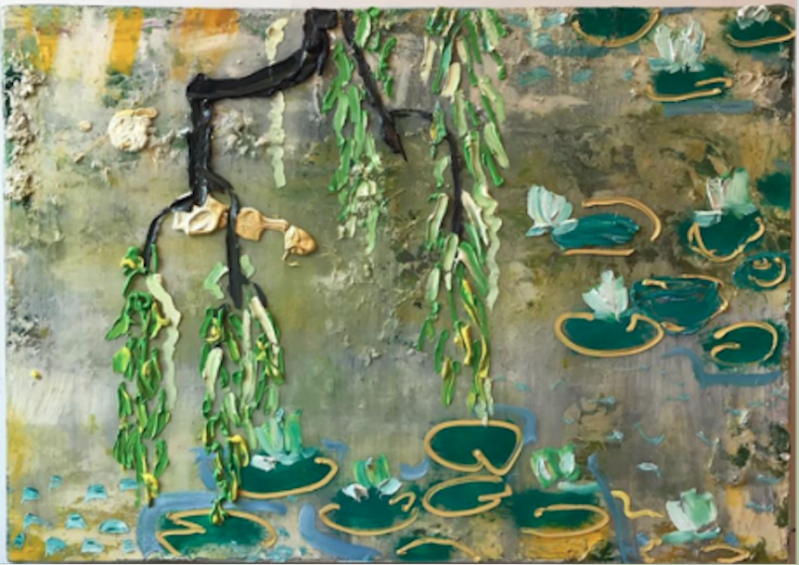 Darius Yektai's "Waterlilies" is part of an exhibition of the artist at Grenning Gallery.
By Mark Segal

Music to Feed the Need

“The Best Jams,” a virtual concert featuring a who’s who of local musicians, will be shown on LTV, Facebook and Instagram Live, and YouTube on Saturday and Sunday at 8 p.m., courtesy of All for the East End (AFTEE) and the Sag Harbor American Music Festival.

AFTEE is a nonprofit whose Feed the Need campaign addresses issues of food instability and other concerns raised by the Covid-19 pandemic. Viewers will be asked to donate to the campaign during the free concert. The music festival is producing the event along with Joe Lauro of the HooDoo Loungers and his company, Historic Films, which will edit and produce the video.

On Appelhof and Krasner

Ruth Appelhof, an art historian and director of Guild Hall from 1999 to 2016, spent the summer of 1974 with Lee Krasner at the painter’s property in Springs. “Lee and Me: An Intimate Portrait of Lee Krasner,” Ms. Appelhof’s memoir of their friendship, will be published next week, just two months after her death from leukemia.

On Sunday at 5 p.m., BookHampton will host a Zoom discussion of the book between Barbara MacAdam, deputy editor of ARTnews magazine, and Helen Harrison, director of the Pollock-Krasner House and Study Center. Registration for the talk is on BookHampton’s website, from which copies of the book can be preordered.

“Hamptons Art Show,” a live auction of artworks from Keyes Art in Sag Harbor, will take place on Saturday at 2:45 p.m. on invaluable.com. The 280 works on sale include photographs by Bert Stern, Richard Avedon, and Ralph Gibson, prints by Robert Rauschenberg, Jasper Johns, Donald Sultan, and Alex Katz, paintings by Connie Fox, Ross Bleckner, and Claude Lawrence, as well as works on paper, collages, and objects by a range of modern and contemporary artists. Registration and a full slate of available works are on the invaluable website.

The film adaptation of “Shirley,” a 2014 novel by the Sag Harbor writer Susan Scarf Merrell, will become available Friday as part of the Sag Harbor Cinema’s virtual cinema series as well as on Hulu, Amazon, iTunes, and a variety of other platforms. The film about the renowned horror writer Shirley Jackson stars Elizabeth Moss in the title role.
A conversation between Ms. Merrell and Giulia D’Agnolo Vallan, the artistic director of the Sag Harbor Cinema, will take place on Sunday at 6 p.m. on the theater’s Facebook page.

While a number of art galleries here have had virtual exhibitions during New York State on Pause, it is likely that restrictions will soon ease. On Saturday, a new solo exhibition will open online:  “RESINance,” an exhibition of paintings by Darius Yektai at Grenning Gallery in Sag Harbor. A virtual opening reception for Mr. Yektai’s exhibition, including an opportunity for a virtual chat with the artist, will be held via Zoom on Saturday at 6 p.m. Because guidelines might soon allow limited in-person visits, the gallery suggests contacting them for updates on what options are available.

The Pollock-Krasner House in Springs is now scheduled to reopen on July 2 with this year’s featured exhibition, “Athos Zacharias: The Late Work.” Admission will be by advance reservation, with numbers strictly limited to six or fewer per tour. Social distancing and face coverings will be required, and the restroom and museum store will be closed.

Artist Videos From the Pandemic

The Parrish Art Museum’s “Artist Stories From the Pandemic,” an online series of short videos by East End artists reflecting on their life and work during the era of Covid-19, will launch on Wednesday with videos by April Gornik, John Torreano, and Peter Campus.