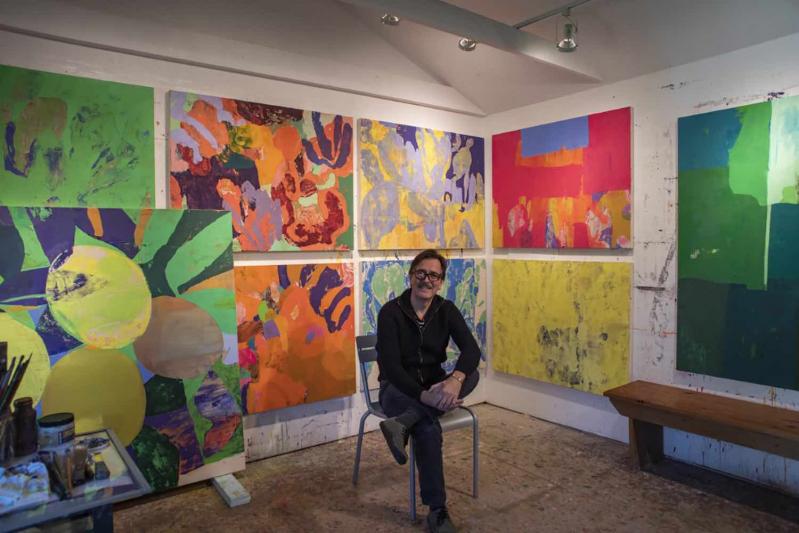 Eric Dever will offer a class on collage and assemblage at the Parrish Art Museum on Wednesday.
Gary Mamay
By Mark Segal

Monologue! — an online acting workshop featuring an intensive rehearsal of contemporary or classic monologues — will be held starting June 9 as part of Bay Street To-Go, the Sag Harbor theater’s virtual programming platform. Led by Allen O’Reilly, Bay Street’s education director, the workshop will offer individuals of any level of acting experience an opportunity for one-on-one, 90-minute sessions with Mr. O’Reilly.

Open to those 13 and up, sessions will be available Mondays through Saturdays from 9 a.m. to 5 p.m. through July 11. The fee for each segment is $75, and registration is via the theater’s website.

Among the Parrish Art Museum’s upcoming workshops is Collage and Assemblage. Set for Wednesday at 11 a.m., the free class will be led by the painter Eric Dever from his Water Mill Studio and will include discussion of works by Alfonso Ossorio and Louise Nevelson and a chance for a live chat with the artist.

The Parrish’s collection will also inspire Writing From Home, an online fiction-writing workshop led by Jennifer Senft. The three-session class will meet Thursday mornings starting June 11. The cost is $75. Writing prompts and instruction will be provided after registration on the museum’s website.

The Hampton Theatre Company in Quogue has announced the cancellation of A.R. Gurney’s “Sylvia,” which was to have concluded its 2019-20 season. Instead, that play will open the 2020-21 season in September and be followed by a holiday show in December and “Ripcord,” a comedy by David Lindsay-Abaire, in March. The season will conclude in May with Lucas Heath’s “A Doll’s House, Part 2,” the 2020 run of which was also canceled.

The Sag Harbor Cinema is the $4 million beneficiary of two Southampton Town easements to preserve its Art Deco facade and restrict the theater’s use. The easements ensure that the “architectural and aesthetic features of the Sag Harbor Cinema, including its facade and memorable neon sign,” will remain after its restoration and renovation and into the future.

According to the town, the “community preservation fund agreed to acquire a restrictive use easement on the property to eliminate commercial development rights and ensure that it be used for community cultural arts purposes.”

The restrictive use easement was purchased in November of 2018 and the facade easement closed last week. The $4 million in combined rights will go toward the cinema’s redevelopment. The cinema has been rebuilt after a fire destroyed much of it in 2016.

The East Hampton Star has revived its galleries calendar online for listings of virtual shows and in anticipation of potential galleries opening their doors this summer. Those interested in listing their online shows or installed exhibitions that can be seen from the street can send details to [email protected].