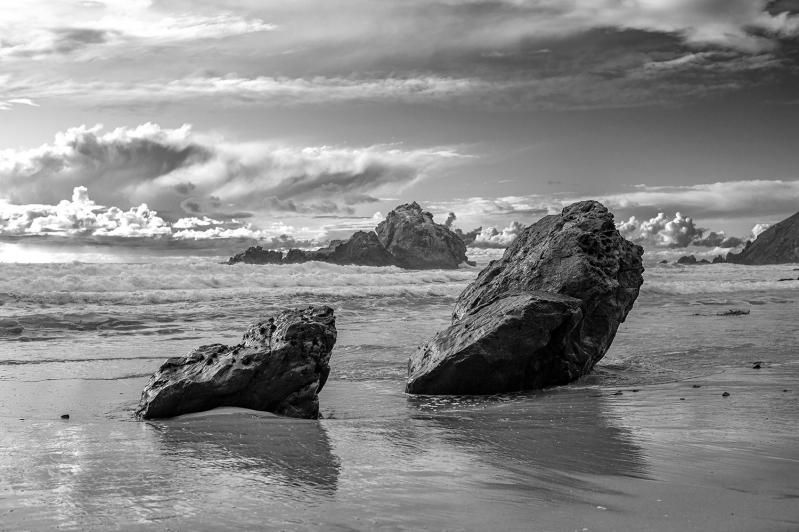 Folioeast’s “Winter Salon” in East Hampton is a vast undertaking in a small space, a miracle of placement and size management with an eye for hanging artwork so that it melds into a cohesive whole. Although it is hard to measure an exhibition of so many artists and their unique contributions, it is worth examining the highlights and the ensemble.

Occupying a good portion of the eastern wall of the gallery is Charles Waller’s “Smoke 1-3.” Mr. Waller, whose dry wit often crackles in his work, seems to have been less of a presence on the East End art scene in recent years, and he has been missed. His three mixed-media pieces embellished with his ink drawings have a nostalgic air, offering tropes of old-school masculinity.

Set on backgrounds of faded old packaging or ads for cigarettes, or facsimiles thereof, are drawings of gargantuan smoking implements. Each one has a different main subject — a pipe dwarfing an overstuffed club chair, a log of a cigarette doused in a martini glass with a toothpick-speared olive nearby, a cigar overtaking an ashtray. They work so well together that the series should be a triptych even though each is its own piece. The obsessive nature of the works, their seriality, and the size of the subjects suggest a habit being broken or even a once-universal lifestyle being subsumed or suppressed. Mr. Waller offers a lot to chew on with a limited amount of visual information.

On the opposite wall, Beth O’Donnell’s photographic images on paper are minimal in their own ways as well. “Torn but Not Broken” is a blending of a photographic image, encaustic, and oil stick on gampi paper, which is made from the bark of a Japanese bush that produces a virtually fiberless translucent sheet. The artist builds up the oil stick around the edges but lets the wax highlight the image, which is an abstracted, possibly floral subject, or seems to be, in the context of her “Peony” photograph nearby. Both are very striking images that go beyond the merely pretty.

Kurt Giehl is another artist less familiar to this viewer, but his work is exciting to see in this setting. Mr. Giehl has different series of works but seems best represented by his abstracted seascape paintings. His focus is on where sea meets sky, overgeneralizing both elements so that they can become unrecognizable as natural phenomena and more like stacked colors on a flat plane. That each subject has a very specific location in its title (on view here is “North Sea II”) touches on both the irony and the sincerity of his practice. “Stripes,” his series of small square works with horizontally stacked compositional elements that hang together in a group of six, seem a logical progression from his imprecise treatment of natural scenes. With bands of black, white, gray, sand, and thinner bands of blue, each square evokes something tangible that is not quite in reach.

The poignancy in Francine Fleischer’s series of nests, photographed from above on plain white grounds, is always endearing. These evocations of home, the circle of life, and, ultimately, loss, give them a gravitas that transcends the decorative and the mere appreciation of their natural sculptural beauty.

It is exciting to see Carolyn Conrad’s return to her series of iconic structures, small-scale buildings she makes by hand with clay and wood and then photographs in a painted setting using natural light. This time, she has revisited those subjects to create a series of paintings in gouache on paper. The references to each step in the creative process build and boomerang on each other in a very satisfying and fascinating way.

Perry Burns’s work is often a palimpsest of darker imagery overlain with bright colors and floral motifs. Here, in “Four Seasons,” a work of mixed media on paper, there are areas that look like torn-off paper that might have built up on a billboard or city wall, but nothing that resembles anything tangi ble. It’s more like a neutral background than anything sinister. The four floral motifs in a varied color palette have ties to what could be interpreted as their different seasons. This simple piece — and the mysteries it offers — compel one back to it.

As promised, there is so much more, but not enough space to discuss each work and its own significant contribution to the whole. The exhibition has been extended to March 29, and Coco Myers, the owner of Folioeast, said she intends to stay open as of this writing by appointment. The pop-up gallery in the Malia Mills shop can also be seen from the street.