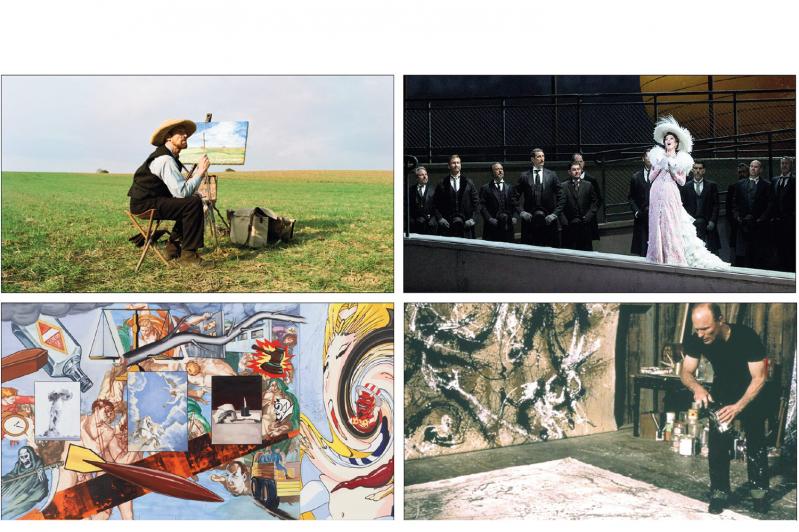 While museums and theaters are closed because of concerns about the spread of COVID-19, venues here have put some of their programs and exhibitions online. Examples of films, performances, and art objects that might be seen or streamed are, clockwise from top left, Julian Schnabel’s film “At Eternity’s Gate,” about Vincent van Gogh, “Manon” from the Met Live in HD, Ed Harris’s film “Pollock,” and the Parrish Art Museum’s “After Michelangelo, The Last Judgement” by David Salle.
David Salle/VAGA at Artists Rights Society, N.Y., Metropolitan Opera Photos
By Jennifer Landes Christine Sampson

Wole Soyinka, the Nigerian playwright and poet who won a Nobel Prize for literature in 1986, once said that “art is solace, art is vision,” and while the context of that sentiment isn’t readily available, one could imagine it being said during a time of strife.

The theaters are dark right now, from Broadway to Bay Street, because the worldwide pandemic known as COVID-19 has made “social distancing” a thing. Museums and libraries in many places are closed to the public to stem the spread of a virus that disproportionately affects senior citizens — a significant demographic for the patronage of the arts on the South Fork.

Guild Hall’s mission statement includes this: “Art is not optional.” And there are ways to access it without potentially exposing yourself to illness. Although it has suspended programs at its theater, classroom, and museum through March 31, East Hampton’s center for visual and performing arts is offering gallery tours and popular program archives such as “Stirring the Pot With Florence Fabricant” on its website.

“Guild Hall was founded as a civic space, and its mission has always been to connect the community,” Ms. Grover said in an interview (conducted electronically). “Right now, we have shifted that connection to virtual only and are using our social media accounts to share new and banked video content from Guild Hall as well as news from other organizations such as the Met Opera’s offering of free nightly opera streams.”

The institution put its entire art collection online recently, and its archives, which are a repository of East End art history, are available through the East Hampton Library’s website.

Nothing replaces seeing a great film in a theater on a big screen. But our local libraries offer a chance for those missing the art house movie screenings of HamptonsFilm and the Sag Harbor Cinema to view foreign and independent films for free through the Kanopy app. The app can be downloaded onto phones, tablets, and laptops or streaming devices such as Apple TV, Roku, Google Play, and Amazon Fire. Patrons just need their library online login information to access Kanopy’s extensive library of award-winning and critically acclaimed films.

As of this writing, the Pollock-Krasner House and Study Center in Springs has not canceled its screening of “Pollock” scheduled for tomorrow. Much of the film was shot at the Springs house and property of Lee Krasner and Jackson Pollock and is a great reminder of the site during its off-season closure, whether watched at their house or yours.

For those with international art interests, the major New York City museums as well as the Musée d’Orsay, Rijksmuseum, and the British Museum have online resources available. The Metropolitan Opera is streaming performances daily.

The Parrish Art Museum in Water Mill may be closed altogether, but its permanent collection is always available online. In addition, the museum offers a digital trove of biographies of influential East End artists. Want to dig into the lives of William Merritt Chase, Audrey Flack, Jackson Pollock, Mary Heilmann, or Alfonso Ossorio? Search by name, by medium, or by location, or use the museum’s interactive map of the East End — all from your sofa, perhaps while sipping a glass of local rosé to pretend you’re out and about. Podcasts and video recordings of past programs are also on the Parrish website.

Terrie Sultan, the museum’s director, said in a message to patrons that the decision to temporarily close the museum to visitors was difficult. “In these challenging times, finding solace in the arts can bring needed relief from stress and uncertainty.”

Social media and news reports show those quarantined in Italy singing arias from their windows. Yo-Yo Ma, the master cellist, has played soothing songs on Instagram. Kids are sharing rehearsal videos from canceled high school musicals thanks to the #sunshinesongs hashtag created by Laura Benanti, the Broadway legend.

Here, Amanda Jones, a music teacher from East Hampton, and her family have been singing hymns on Facebook Live. Ms. Jones said she is reminded somewhat of the aftermath of the terrorist attacks on Sept. 11, 2001. “Our community all came together at the East Hampton Presbyterian Church . . . and the sense of community was so necessary and wonderful,” she said on Sunday, also by email.

“It felt so beautiful, and as I was watching all the things that bring us together get canceled, I thought there’s one thing I can do to help this.” Ms. Jones is a pianist and the founder of South Fork Performing Arts. Her husband, Ben Jones, is a trumpet player and the band teacher at the Springs School. Her children are musical as well. “That’s our gift, so why not share it and see what we can do to help bring together our hurting and scared community?”

The efforts of the regional arts community and the art and cultural world at large are heartening to Ms. Grover, who called it “the purest expression of hope and unity. . . .We want to provide an antidote to troubled times.”