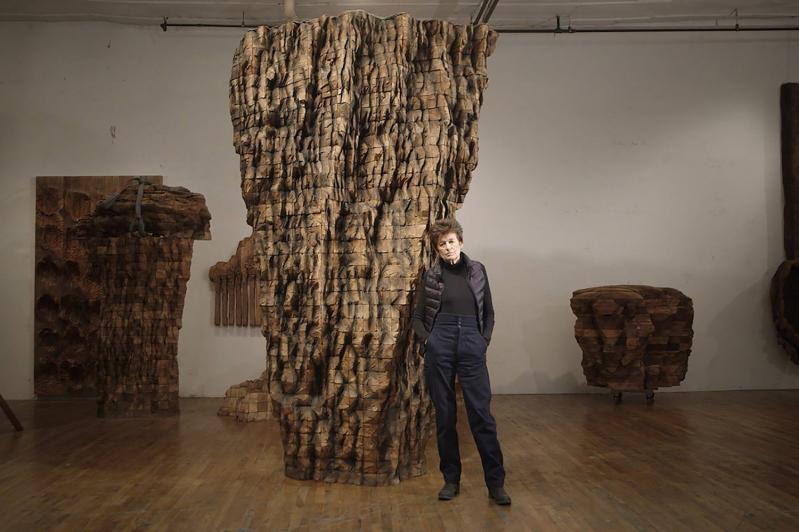 An internationally acclaimed sculptor with major public commissions in Princeton, Cambridge, Mass., New York City, London, Miami, New Orleans, Chicago, and elsewhere, Ms. Von Rydingsvard pinpointed that year because it was when she was accepted into the M.F.A. program at Columbia University.

“In New York I came to a place where there were other women artists," she said during a telephone interview. "I got this feeling that art is something important. It was like this miraculous awakening. And there was Columbia, which had a real art department, where art counted. I had never been in such a department.”

Ms. Von Rydingsvard’s life before New York consisted of almost unremitting poverty and pain. She was born in 1942 to a Ukrainian father and a Polish mother who, as peasant farmers, were forced to work for the Nazis. After the war, their family spent five years in a displaced persons camp before coming to Plainville, Conn., in 1950. “I never thought of being an artist. I never understood there was such a thing as an artist, because it was a blue-collar working town that had no artists that I knew of,” she told the filmmaker.

Her father was gruff, harsh, threatening, even physically violent toward his family, and he abused his children verbally as well as physically. Ms. Von Rydingsvard married and lived for nine years with a man who turned out to be unstable enough that she feared for her and her daughter’s lives. She acknowledged that it was difficult to speak about her early life as frankly as she does in the film.

“On the other hand, my father is dead, and I have no idea whether my former husband is dead or alive. Because of his illness, he would have forbidden me to do anything for myself. I nursed him for two years after he had a breakdown. I finally realized it was not me who could heal him.”

What came out of that marriage, and what kept her going for so many fraught years, was her daughter, Ursula Anne, who is a filmmaker with three children. “We are very close,” Ms. Von Rydingsvard said.

Ms. Rydingsvard spent most of her first two years at Columbia welding. Toward the end of her time there, a monk, Michael Mulhern, brought her a pile of 4-by-4 cedar beams. “I felt the wood was soft, and so sensuous, and that I could get really carried away.”

She worked almost exclusively in that material for much of her career, creating monumental sculptures by marking the wood by hand and then cutting the beams, assembling the pieces, and finishing them with graphite or pigment.

She began exhibiting her work in solo and group exhibitions in 1976 and hasn’t slowed down since. Her sculpture is in the collections of dozens of important museums and sculpture parks throughout the United States.

In addition to detailing her personal history through archival photographs, personal recollections by her, her daughter, and her brother, the film includes interviews with artists, art historians, and collectors. Mr. Traub, who is also the cinematographer, focuses at length on the fascinating, intricate processes by which her work is created.

In 2012 she was commissioned by Princeton University to make her first outdoor copper piece. The three-story sculpture consists of 5,722 hand-pounded copper plates. Another monumental public work was created in bronze in 2016 for the McGovern Institute for Brain Research at M.I.T.

“That piece is 24 feet high,” she said, “with lace at the very top. Lit from within, it does miracles at night.” She modestly added that the building is for scientists, and that her late husband, Paul Greengard, “was a scientist.” Only when pressed did she add that he was a Nobel Prize-winning neuroscientist who oversaw an important lab at Rockefeller University. They were married for 34 years until his death last year.

After Friday’s 6 p.m. screening, Ms. Von Rydingsvard will discuss her work with Terrie Sultan, the Parrish’s director. Tickets to the program, which is presented with Hamptons Doc Fest, are $15, $5 for members and students.

This article has been modified from its original and print version to clarify that most of the quotations are from a telephone interview with the artist rather than from the film.