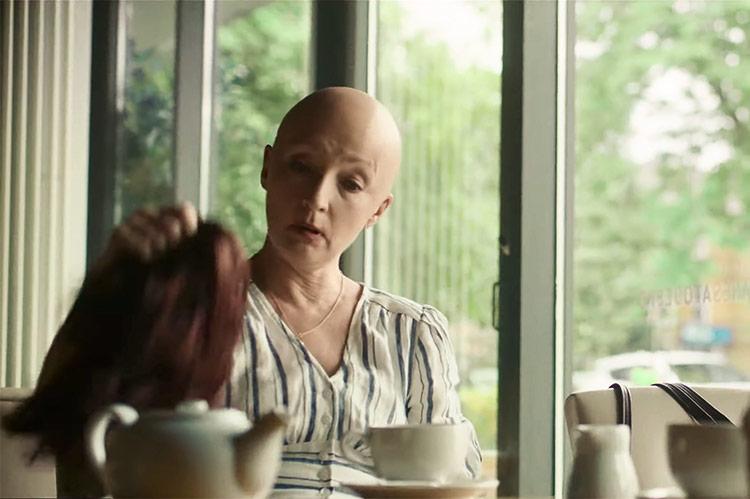 Lesley Manville, here contemplating her hairpiece, and Liam Neeson play a blissfully married middle-aged couple whose lives are upended by a cancer diagnosis in “Ordinary Love.”
By Mark Segal

HamptonsFilm has a valentine for the East End. “Ordinary Love,” just released and starring Liam Neeson and Lesley Manville, was cited by The Spectator as “a love story, told profoundly and beautifully and honestly rather than cloyingly or sentimentally.” It will be shown on Saturday at 6 p.m. at Guild Hall as part of HamptonsFilm’s Now Showing series.

Written by Owen McCafferty, a playwright from Northern Ireland, “Ordinary Love” is the story of Tom and Joan, a middle-aged couple whose long and vibrant marriage is upended when she is diagnosed with breast cancer.

“I was very moved by the portrayal of a couple who find themselves in the middle of a nightmare when one of them gets a cancer diagnosis,” David Nugent, HamptonsFilm’s artistic director, said. “Lesley Manville is, as she always is, wonderful. And those who know me know that I’m a huge Liam Neeson fan.”

The film is a change of pace for its Belfast-based directors, Lisa Barros D’Sa and Glenn Leyburn, whose previous film, “Good Vibrations,” was a story of the Belfast punk scene set during the Troubles of 1970.

“ ‘Good Vibes’ was much more of an ensemble piece with a much larger cast, and filming that was a bit like trying to harness chaos — which was wholly appropriate to the subject matter and the tone of that film,” Mr. Leyburn told The Irish News in December.

“As filmmakers we always like to try new things and have new challenges, so to do something like ‘Ordinary Love,’ which is so intimate with two great actors like Liam and Lesley, was really very appealing to us.”

Regarding her co-star, Ms. Manville, who was nominated for a best supporting actress Oscar in 2018 for “Phantom Thread,” told The Scotsman, “We just hit it off, got on, but neither Liam or I have reputations for being difficult or anything like that anyway. We still keep in touch, every few days I get some funny WhatsApp from him.”