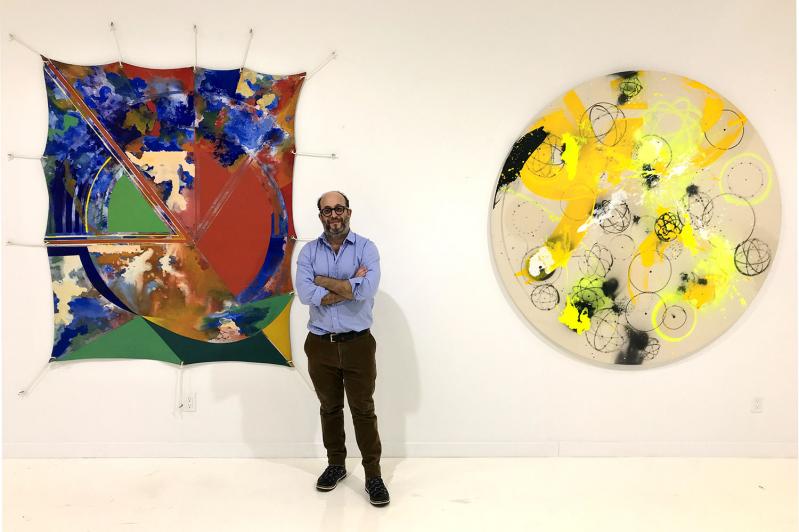 Eric Firestone, whose eponymous gallery opened on Newtown Lane in East Hampton 10 years ago, has always followed his own path. While most gallery owners learn their trade by working for other dealers, Mr. Firestone opened his first gallery, in Tucson, Ariz., in 1994, when he was 21.

"The greatest thing that happened to me," he said during a recent conversation, "is I didn't have anybody to tell me what to look at or not to look at, so I was always very open about reviewing material. I've stayed true to that ideology throughout my career. More important, I like to talk about where an artist fits in the historical canon."

In Arizona, his interests were wide-ranging. Amy Abrams, an arts writer and journalist, called him "the pre-eminent dealer of Arts and Crafts furniture in the West," and he focused as well on midcentury design and American Regionalist painting. He opened a second gallery in Scottsdale in 2008, but that same year, when he participated in Art Hamptons, his attention began to turn to the East End. The experience was so positive, he recalled, that he returned to the fair the year after.

"I had done everything I wanted to do in Arizona. I was in my late 30s by then, and if I was going to make a move, I figured I'd better do it soon," and he did, relocating to East Hampton soon after. "I've fallen in love with the idea that there is a community here, and there is so much beauty. East Hampton has been very good to me."

Never one to rest on his laurels, Mr. Firestone opened a loft at 4 Great Jones Street in NoHo (North of Houston) in 2016, and just this month he launched a ground-floor space on the same block. Its first show, "Futura 2020," features new work by a graffiti pioneer of that name who began his career in the late '70s painting subway cars.

"I've always been a fan of him and his work," said Mr. Firestone. "I think in the larger picture he's a very important American artist. He just has not had a proper gallery to help shepherd a dialogue with people, and I believe in the next few years institutions will give him more of a fair look in the larger art world." Concurrent with the show at Firestone, Futura2000 has an installation of a suite of hand-painted lanterns at the Noguchi Museum in Queens.

Of Futura2000's show at the gallery, Max Lakin of The New York Times said, "The skittering, hectic forms and negative space can recall Twombly, and there is a kind of placid spiritualism at work, too, a collision of the natural and the unknowable that seems to make the entire canvas hum."

In the same article, the artist commented that "people are quite familiar with my stuff, but no one gets to actually see it, so I'm really happy people get to look at the work, without swiping and zooming and enlarging with your two fingers. People's perceptions immediately change. You're actually in it."

If there is a through line to Mr. Firestone's approach, it is to bring scholarship to bear on the work of artists, many from the '50s, '60s, and '70s, whose careers have been underrepresented in the historical record. "Anybody can pick a front-runner," he said. "Why isn't an artist a front-runner? What happened?" Many artists, especially women and artists of color, have not had the proper platform or the wherewithal to push through to the next level, he said.

Institutions are finally focusing on those two categories, said Mr. Firestone, "because those are the artists who haven't been fully investigated." American figurative paintings of the '60s and '70s are also "primed for much more institutional re-evaluation." He himself is showing more women artists than men, not on purpose but "because when we're doing the research about a particular period, guess who's coming up? The artists who were blocked out."

Another painter whose work Mr. Firestone felt hadn't received the attention it deserved is Joe Overstreet, who had a solo show at the Firestone loft in 2018. The 20 rarely seen works in that show were called "stunning" by Roberta Smith in her New York Times review. "The day after I opened the show, I looked around the room and there were three curators from MoMA, one from the Whitney, and another from the Met. That show ended up being a real breakthrough for him." A retrospective of Overstreet's work is scheduled for 2024 at the Menil Collection in Houston.

Overstreet is a perfect example of an artist whose story needed to be told and who needed the proper stewardship, said Mr. Firestone. An innovator who abandoned stretcher bars in favor of shaped canvases tethered to walls, floors, and ceilings, the artist, with his wife, Corrine Jennings, and Samuel C. Floyd, established Kenkeleba House, a gallery on the Lower East Side that supports African-American culture and other artists of color who have gone unnoticed by the art establishment.

While Mr. Firestone has mounted a number of solo shows in the city, he figured out after his first year on Newtown Lane that "I'd better change that pretty quickly or I wasn't going to stay out here very long." The current exhibition there, "The '60s," features work by 15 artists. "I keep my doors open year round, and I try to have multiple conversational opportunities in the space here at all times," which are encouraged when work by a variety of artists is on view.

When he first came to East Hampton, the gallerist remembered, there were very few galleries in the village. "Now there are a lot of new players here, and I'm very pro what's happening. What I've noticed during the pandemic is that people are really making an effort to walk through the village and go to multiple galleries. They are making that part of their day."

"I love East Hampton, this is my home, but being in the city has allowed me to use that platform to have many more museum curators, critics, and scholars see the work." Great Jones Street, he suggested, "has a charming grit to it," and a history as well. Charles Mingus lived across the street from Mr. Firestone's loft space, Jean-Michel Basquiat lived on the block, Keith Haring's loft was around the corner, and the street provided the title for Don DeLillo's third novel. "Again, history. It just feels connected to who I am."