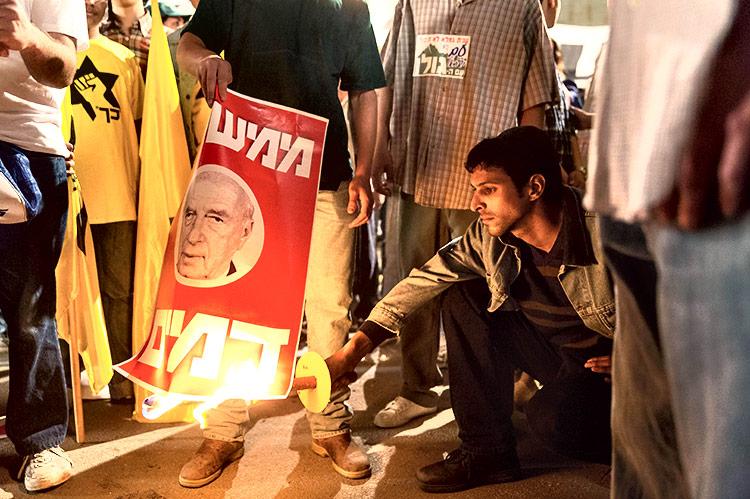 The world is a perilous place these days, and there are few if any places more volatile than the Mideast. A new film by Yaron Zilberman, an Israeli-American, goes back to a time when peace between Palestinians and Israelis was not only conceivable but even imminent, and illustrates why efforts by both sides to achieve it have ultimately failed.

“Incitement,” which traces the events that led to the assassination of Yitzhak Rabin in 1995, is “a cautionary tale,” Mr. Zilberman said by phone last Thursday, about how inflammatory words can incite violent responses. It will be shown as part of HamptonsFilm’s Now Showing series at Guild Hall on Saturday. It is the kind of film that will enliven a cold winter’s night with much to discuss afterward over dinner or drinks.

In 1993, the world hailed Rabin’s efforts to make peace with Yasser Arafat and the Palestinians in Oslo. Yet it was not as well greeted by certain factions back home.

Political and religious leaders in the anti-peace movement in Israel condemned those who took part in any compromise that ceded land on the West Bank they thought had been divinely granted to them. Some students at Bar-Ilan University were listening closely to that philosophy, including Yigal Amir, a law student who used those leaders’ words to justify his plans to assassinate Rabin.

“Their words were irresponsible and inflammatory,” Mr. Zilberman said. “They said things, in my view, that promoted the assassination.”

Mr. Amir is in jail for life and is allowed little communication inside or outside the facility. But Mr. Zilberman’s researchers were allowed access to his family and friends. Through them they eventually reached Mr. Amir via phone for hours of interviews. In addition to reading everything he said in court, the filmmakers spoke at length with everyone they could to form a factual basis for Mr. Amir’s biography in the screenplay and the events from the signing of the Oslo peace accords in 1993 up to the assassination two years later.

“The film is based on reality and things that happened,” Mr. Zilberman said. “When certain things were not there, we relied on imagination. But all the time, I was asking myself ethical questions about how far can I go with an event that was so important to so many people.”

There is a pivotal scene between Mr. Amir and his father that Mr. Zilberman said was a creation for the film. “It is not a conversation that I know happened, so I had to write it.” But he knew the father’s positions from speaking to him and from other interviews and newspaper reporting. After Mr. Amir tells his father that Rabin should be assassinated, his father counters that “logic forbids his assassination despite religious laws that could justify the assassination.”

According to Mr. Zilberman, most of the rest of the story is a re-enactment based on those hundreds of hours of conversations and research.

Mr. Amir has maintained his religious justifications for the killing and has been reported to believe that he was the main reason the peace process was derailed. The actor who plays him gives a sensitive and believable portrayal of someone whose indoctrinated extremism leads to tragedy.

The film has been controversial to supporters of Benjamin Netanyahu, who is seen in real footage at a rally where Rabin was called a Nazi and a traitor. The leader of the Likud Party in opposition to Rabin’s Labor Party, he was elected not long after Rabin’s death.

Mr. Zilberman said many have asked him why he did not include footage that shows Mr. Netanyahu telling a crowd not to use violence to achieve their ends, but the crowds shouting “Rabin is a traitor” and posters showing him in a Nazi uniform demanded some kind of response, the director said.

“He could have chosen not to speak to a crowd like that. He could have stopped completely, drew a line, or offered just one word against violence then.”

During the film’s credits, the filmmakers note what followed the shooting, including the election of Mr. Netanyahu, with no mention of Mr. Rabin or his murder in his victory speech.

“Looking at where we are today, we can trace it back to what happened in Israel then and arrive at where we are right now.” Mr. Zilberman’s view of that society’s failure to prevent the murder of a political leader has resonance now as radical extremism continues to attract potential adherents.

“If you hear things of that nature, you have to discuss them, and raise your concerns. If it goes too far, go to the police,” he warned. “If the other students or his friends had reported his behavior, this could have been stopped.”

“Incitement” will be released in theaters on Jan. 31. Saturday’s advance screening at 6 p.m. costs $15, or $13 for members of HamptonsFilm or Guild Hall.