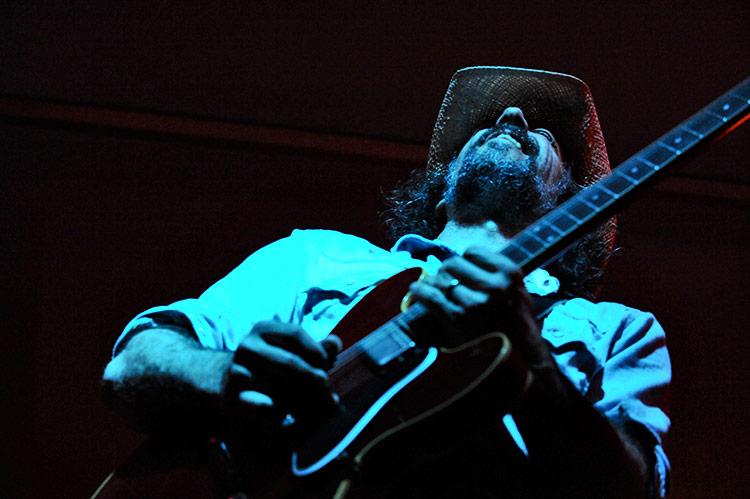 Andy Aledort and the Groove Kings will heat up the Stephen Talkhouse in Amagansett on Saturday.
By Christopher Walsh

This mostly mild winter will heat up a little more on Saturday when Andy Aledort and the Groove Kings come to the Stephen Talkhouse in Amagansett for a 10 p.m. show.

The acclaimed guitarist, who lives in Sea Cliff, is no stranger to the South Fork: He has given performances at the Talkhouse going back several years and, in the summer, at Lynn’s Hula Hut in Montauk. He has worked with many South Fork musicians and recorded at Larry Schmid’s Applewild Recordings in Bridgehampton.

For a decade, Mr. Aledort was a member of Great Southern, the band led by Dickey Betts, a founding member of the Allman Brothers Band. A senior editor of Guitar World magazine, he has written more than 200 books of guitar transcriptions and a series of instructional books and videos.

His talent has taken him far, as both a performer and educator. His book “Jimi Hendrix Signature Licks: A Step-by-Step Breakdown of His Guitar Styles and Techniques,” an instructional book with accompanying CD of audio recordings, led to recordings and performances with Double Trouble, the late Stevie Ray Vaughan’s rhythm section. That experience led to him perform and record with Billy Cox, Mitch Mitchell, and Buddy Miles, all members of Hendrix’s bands.

As he makes his own contribution to the aural history of the blues, Mr. Aledort has more recently added to its oral history as well: With Alan Paul, a colleague at Guitar World, he wrote “Texas Flood: The Inside Story of Stevie Ray Vaughan,” which was published in August and includes contributions from those closest to the late blues legend.

That effort followed Mr. Paul’s “One Way Out: The Inside History of the Allman Brothers Band,” a successful biography in the oral history format that similarly drew on recollections of those who lived the experience. For a follow-up, he chose Vaughan as his subject and insisted on Mr. Aledort’s collaboration, given the latter’s long experience with Vaughan, Tommy Shannon and Chris Layton of Double Trouble, and the guitarist Jimmie Vaughan, Stevie Ray Vaughan’s elder brother and musical mentor.

Mr. Aledort is a fitting biographer, having played with Vaughan several times for magazine articles and instructional books before Vaughan’s untimely death at 35 in a helicopter crash in 1990. One hears Vaughan in Mr. Aledort’s similarly incendiary approach to, and seemingly complete command of, the electric guitar. Examples abound on recordings like “Live at the North Star 2009” and “Put a Sock in It,” the latter an album originally released in 1999 and recently remastered and reissued by the Italian label Long Song Records.

“In a way, the music on that record is more in line with what’s gone on in the last five years, to my mind,” Mr. Aledort said last week of “Put a Sock In It,” citing artists like Derek Trucks, Susan Tedeschi, Gary Clark Jr., Joe Bonamassa, the Marcus King Band, and Gov’t Mule, all contemporary artists characterized by a classic blues-rock musicianship. The blues, he said, “might come in and out, go up and down, but never go away.” His 1999 album has been given new life, “which is fun,” he said.

Mr. Aledort hinted at a set heavy on music by the Rolling Stones and other classic blues and rock ‘n’ roll artists on Saturday, as well as a few local friends joining him onstage. Copies of “Texas Flood: The Inside Story of Stevie Ray Vaughan” will be available for purchase and signing.

The show is an East Hampton Star Experiential event, which also includes a 9 p.m. Wolffer Estate Vineyard wine reception at Wolffer Kitchen in Amagansett Square. “Our band goes great with a pinot noir,” Mr. Aledort said with a laugh, “or whatever else they have.”

Tickets to the wine reception and performance by Andy Aledort and the Groove Kings cost $25 and are available by calling Zach Zunis at 631-324-0002 or sending an email to [email protected]. Admission to the Stephen Talkhouse only is $10.