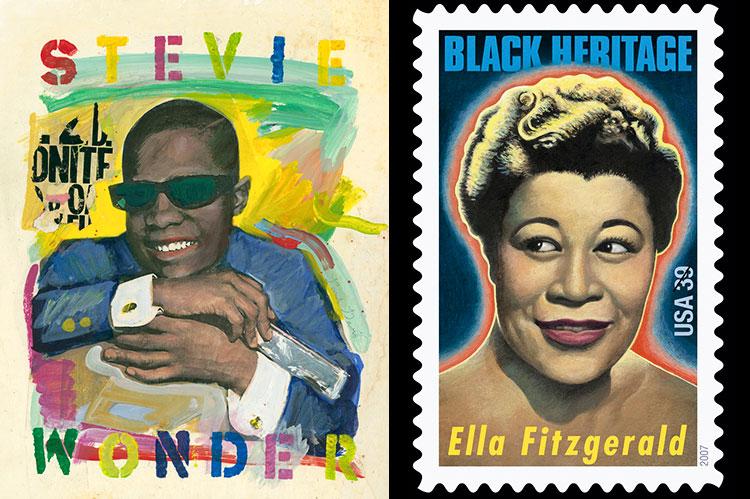 A portrait of Stevie Wonder by Paul Davis, who also created the portrait of Ella Fitzgerald for the 2007 stamp issued in her honor.
By Mark Segal

Croak's Dirt Work
MM Fine Arts in Southampton will open "James Croak: A Survey" and "Where I Live," a group photography show, with a reception on Saturday from 2 to 6 p.m. The exhibitions will remain on view through Jan. 10.

A sculptor and photographer, Mr. Croak, who lives in Sag Harbor, is known for his cast-dirt sculpture, and the exhibition will include examples from his "Dirt Man" and "Dirt Baby" series, as well as his 1999 "Man and Woman (After Antonio Lopez Garcia)." "Wolf on Books" and selections from "New Skins for the Coming Monstrosities" are being shown for the first time in two decades.

Paul Davis at Keyes
An exhibition of 32 digital prints by Paul Davis, an artist, graphic designer, and member of the Art Directors Club Hall of Fame since 1995, will open tomorrow at Keyes Art in Sag Harbor with a reception from 4 to 8 p.m. and continue through Jan. 10.

Mr. Davis joined Push Pin Studios in 1959 before leaving to pursue a freelance career three years later. The longtime Sag Harbor resident has designed magazines, books, posters for the Public Theater, and his work has been published in Esquire, Life, Look, Sports Illustrated, and Time, among many other magazines.

Where Pollock Sat
When the artist Cile Downs and her husband, Sheridan Lord, built their house in Springs in the late 1950s, Lee Krasner gave them a rectangular oak table from her kitchen. Ms. Downs, who died in August, bequeathed the table to the Pollock-Krasner House and Study Center in Springs.

It is not known when Jackson Pollock and Krasner acquired it, but in 1949 Martha Holmes photographed Pollock sitting on it in their kitchen, and it's the same table he famously overturned during a dinner party in 1950.

Hammond in Bronxville
Phyllis Baker Hammond, a Springs sculptor whose career has spanned seven decades, is showing nine works through Friday, Dec. 18, in a group exhibition at the OSilas Gallery at Concordia College in Bronxville. While she began her career sculpting in clay, since 1995, when she moved full time to Springs, she has worked in steel and aluminum. In 2017, she made five large-scale works for an installation at Dag Hammarskjold Plaza in New York City.