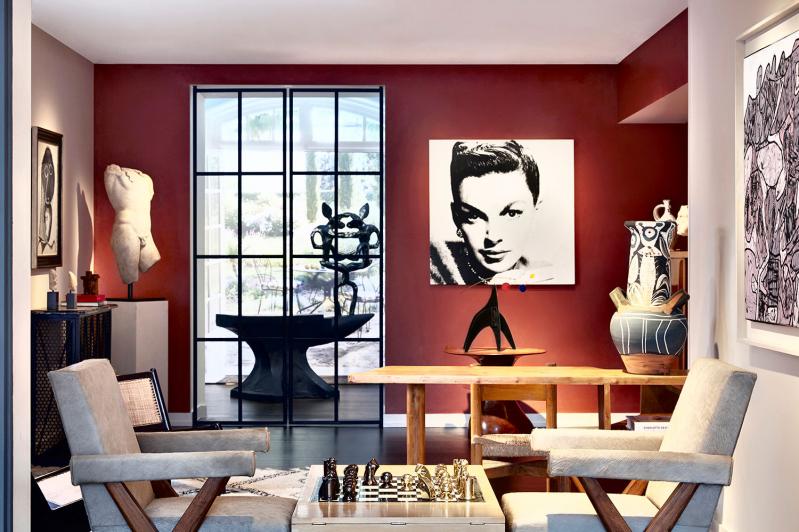 The front room of Selavy by Di Donna in Southampton is "open" all the time, with a full view from the street and a way to connect to the gallery's website for more information on the objects within.
<I>Jacob Snavely<P>
By Jennifer Landes

With everyone spending so much time in their houses lately, there is a natural tendency to want to improve, reinvent, or upgrade those living spaces that never quite achieved their intended purpose or aesthetics.

Emmanuel and Christina Di Donna, proprietors of a large Madison Avenue gallery of the same name, have taken years of experience in the art world and channeled it into a jewel box of a showroom on Job's Lane in Southampton. Selavy by Di Donna is an experiential space that aggregates both high art and design objects into livable rooms where everything is for sale.

Both are formerly of Sotheby's, which is where they met. Ms. Di Donna is the daughter of Raymond Floyd, a Hall of Fame golfer. She grew up spending much of her time in Southampton. As a couple and then a family of their own, they maintained a second home here that has become their primary residence. Their children now attend the Ross School.

Speaking recently at the gallery, Mr. Di Donna said the pandemic was the primary motivation in moving here this year, but they are happy they did it. Planning to stay for a while, they signed a three-year lease on the current space and will keep it open most of the year. He spends two nights a week in the city to oversee the gallery there. "It's great, having a bit of a reverse commute. There are a lot of positive points about it."

The Southampton space opened in July with a summer show, or what they call a "Salon." The theme of its Fall Salon is "Icons Through the Ages." The works on view include art, design, and antiquities, objects made anytime from 4000 B.C. to 2000 A.D.

Although they have regular viewing hours Thursdays through Saturdays, those passing by can also access more information about what they see in the front window just by scanning a QR code on an exterior sign that explains the space and what's on view. The code connects a cellphone to a website where each piece is described along with its price.

Ms. Di Donna studied art history at Wake Forest and Mr. Di Donna, who was born in Paris, received a master's degree in art history from the Courtauld Institute of Art in London. Their gallery in the city is a more traditional white cube, with a few objects given a great deal of space to be contemplated individually. Selavy is more immersive. "We do very historical shows in the city that take more than a year to put together," he said. "This is more stemming from my taste and Christina's taste," with the material sourced from private collections.

"Nothing like this exists here," Mr. Di Donna said. "It gives people a way to imagine what a work of art will look like above a console or mixed with other art from other cultures or other times." Even for those without the deep pockets required to amass such collections, the easy mix of styles can translate into inspiration for more modest settings, particularly as sophisticated design is now available at all price points.

Included in the current melange are a unique Picasso ceramic vase, a classical Roman bronze fragment of a female face and a Roman marble torso, a Wendell Castle table, an ancient Greek helmet, a Man Ray chess set, a set of Pierre Jeanneret X-leg chairs, Keith Haring drawings, and much more.

Immediately apparent are ways in which the treasures from different centuries and parts of the world interact in a layered and harmonious way. "When you have a great work of art, there is something universal about it," Mr. Di Donna said.

He also underlined some of the appealing parallels that he finds in these vignettes. Pointing to a nearby Pablo Picasso vase and a Jean Dubuffet painting, he said they "work together easily because they are of the same period, but they also have a strong linear element, strong colors, high contrast, and strong gestural aspects."

With 28 years in the art world, he said he has seen a lot of impressive collections, the most memorable of which had this kind of mix and cohesion among objects of high quality. He also cited certain French art fairs where African sculptures are blended with midcentury painting and abstraction.

"Those discussions are quite interesting to explore," he said. "That's what we're trying to do here in a more literal, livable setting. . . . It's nice, right? It feels cozy."