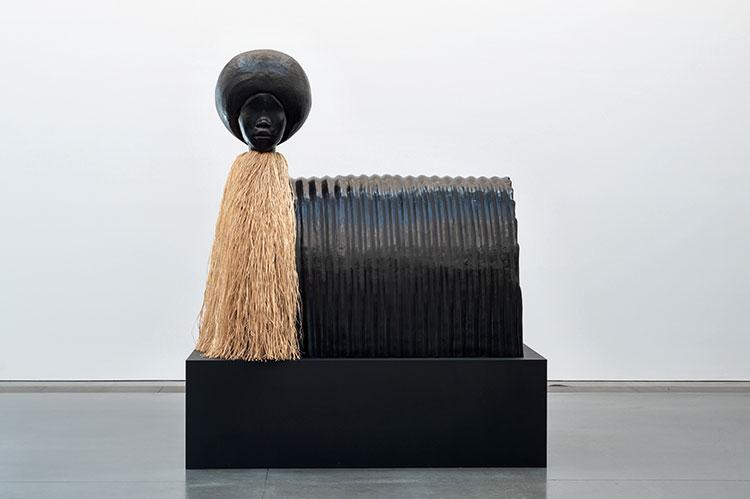 “Material Witness,” an exhibition of four works whose materials are imbued with the meaning of the work itself, is now on view at the Parrish Art Museum in Water Mill. In addition to works from the museum’s collection by Ross Bleckner, Louise Nevelson, and Donald Sultan, the show includes “Sentinel,” a sculpture by Simone Leigh that is on loan from the FLAG Art Foundation in Manhattan.

Ms. Leigh, who has been chosen to represent the United States at the 2022 Venice Biennale, draws upon the experience of Black women throughout history in works that refer to African tradition, feminism, and racial politics. In “Sentinel,” a corrugated Quonset hut represents the figure’s body, with tropical raffia palm serving as the skirt.

The Museum will also hold two screenings of “Aggie,” a documentary about the art collector and philanthropist Agnes Gund, Friday at 6 and 8:45 p.m. The first screening will be followed by an onscreen conversation among Ms. Gund, Dorothy Lichtenstein, and Catherine Gund, Agnes’s daughter and the director of “Aggie,” and moderated by Corinne Erni, the museum’s senior curator of ArtsReach and special projects. A pre-recorded conversation will follow the second showing.

Agnes Gund is widely recognized for her support of artists, particularly women and people of color, and her commitment to social justice issues. The film opens with her sale of Roy Lichtenstein’s “Masterpiece” for $165 million to start the Art for Justice Fund.