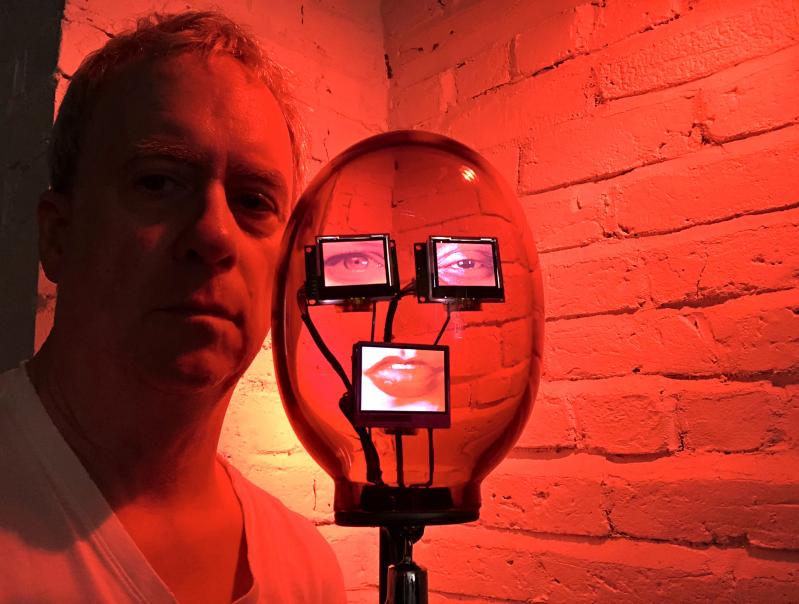 Tony Oursler posed with one of his “Bots” in his Manhattan studio recently. “Egg Heads,” and his projections on water vapor, above right.
By Jennifer Landes

Was your Instagram feed blowing up last October with ghostly emanations appearing on trees, structures, and water on the Upper West Side? Even those outside the art world who had not heard of Tony Oursler were dropping everything on a clear night to be at Riverside Park to experience the “Tear of the Cloud” projections that came from his imagination and research.

A distillation of that experience will soon manifest itself more locally at Guild Hall. Mr. Oursler, who divides his time between a home and studio on the Lower East Side and Southold, will devote a museumwide exhibition to the theme of water.

In his Henry Street studio on a recent morning, soft whispering voices came from freestanding “Bots,” his orb-shaped semi-clear sculptures, with tiny screens roughly where eyes and a mouth might be on a face. They display disjointed images of the eyes and mouths of actors moving to scripted words that “in the end is all my voice, but I try to channel other people to keep the variety and veracity,” he said.

He deploys a similar mode when he uses larger projections of entire faces, as he will for the first time on water vapor at Guild Hall and on “Egg Heads,” large ovoid shapes that come alive with faces with images of drops and puddles of water moving over them. “The liquid is working with the theme of water,” he said. “The deluge becomes a metaphor. On the eggs, the soaking could be chemicals, water, or information.”

The “Tear of the Cloud” project was the result of the artist’s exhaustive research into the history, myths, and legends of the Hudson River Valley. In addition to a famous 19th-century murder that was solved by Edgar Allan Poe, Mr. Oursler addressed spiritualism and magic, and even the Headless Horseman.

For this exhibition, he has been thinking about water and how it has functioned as a vehicle for magical thinking throughout history, from the belief in sea monsters and other early legends to the pseudoscience of water memory used in homeopathic medicine today. Themes of deluge and the environment reveal themselves, and the work explores how rational thought can be subsumed by “niche belief systems that get amplified” through social media and other outlets driven by technology.

“That brought me into the thinking of the project for Guild Hall,” he said. “I was inspired by taking the approach of the subject of water as a sort of template for our belief systems, our consciousness at a given moment.” He thought metaphors of the Hudson coming down from the mountains to meet the ocean would be a good connection to “Tear of the Cloud.”

Yet “it won’t really be that overtly evident, because I jumped ahead into information overload, artificial intelligence, and conspiracy theories,” he said. “One aspect is new digital mythology. Another aspect is algorithmic political agitation.” In other words, it’s complicated.

Digressing for a moment, back to the beginning of his career, Mr. Oursler was part of what would become a seminal group of artists at the California Institute of the Arts in the late 1970s, taught by a faculty that included John Baldessari and Laurie Anderson, who would later live in Springs. His classmates — Jim Shaw, Sue Williams, and especially Mike Kelley, who died in 2012, were his friends and collaborators. They were part of the first generation to grow up on television, and video became very much a part of their work. Mr. Oursler’s interest in the medium has kept current with each new technological development in how we receive information and ideas.

Philosophically, “we were picking up from Pop Art and conceptual art and moving things forward, blended with a punk attitude,” he said. “What happened between then and now is the depths we were plumbing are now very much on the surface, very apparent in the culture.”

Although his work “is always about living in the moment,” he often finds threads connected to history, typically in niche ideas or urban myths and thinking about how politics and even terrorism can be connected to them. He traces some of his interest back to the Tylenol poisonings in 1982, he said, and a rumor that Procter and Gamble’s logo featured satanic symbolism that persists to this day. “These sort of generative, I guess you’d call them memes today, became effective aberrant belief systems.”

These can encompass anything from belief in the paranormal to denials of climate change, to even the anti-vaccination movement of the current moment. Then there are the conspiracy theories that have linked Democrats to satanic rituals and a child sex ring in Pizzagate, and other fringy notions.

“My interest is in how these belief systems operate, positively or negatively, as agents of change. To me they are a new art form.”

He collects historical examples of this in the work of “Thought Photographers,” who in the late 1800s held negatives to their heads and then meditated on something. The artists would interpret the resulting abstract images. “It was kind of pre-Surrealistic, concurrent with things that happened in physics and psychiatry. It’s a wonderful poetic concept.”

Mr. Oursler grew up in Nyack, N.Y., with parents who were mystical Cath­olics. The themes of heaven, hell, and limbo, and the iconography, stories, and rituals of the church became his first exposure to these constructed belief systems. Hearing the stories of one of his grandfathers, a magician who was friendly with Harry Houdini, also made an impression.

“I first became a painter, then became very interested in video. The combination of painting, sculpture, and video followed me through my whole life.” All of these mediums will be evident at Guild Hall.

The three main rooms of the museum will have somewhat different themes and series. There will be a dark room installation with the theme of information overload. He will also incorporate two-dimensional projections and his “Bots,” which challenge the “notion of artificial intelligence, our position in relation to what’s going to happen when we start offloading our consciousness and our relationship to bots.”

Leaving aside the practical concerns Mr. Oursler has with things like self-driven cars, “I’m in a much more poetic vein with the ‘Bots,’ ” he said. “The idea of connecting and putting your faith in artificial intelligence is fascinating to me.” He works with several people whose faces and/or voices become part of his artwork. He scripts the words, having the “Bots” say “tiny poetic and provocative statements. Some are more related to overt themes that relate to technology, and some are like a psych test.”

His facial-recognition works, which incorporate sculpture, video, and painting, include facial features, sometimes mixed up and with references to mapping and the consequences of “big data.” He pointed to Cambridge Analytica, a British political consulting firm, and its early fusion of “behavioralism and psychology digitally coming together so they had understandings of how people are going to be motivated and operate,” which came into play in the last presidential election.

His “Rorschach” paintings are the opposite of the bots and big data. “For me, Rorschachs are the litmus test of humans.” The response to an inkblot is so personal that a machine would have a difficult time replicating a similar reaction and would therefore fail a Turing Test, which measures whether artificial intelligence is sentient.

“There’s so much magical thinking around technology. The idea is that you’re going to be taken care of by Google or Facebook, but you’re not being taken care of, it might be the opposite. . . . A certain percentage of people are nullified by technology. I’d like to see that turned around through creativity. Art is for people, it activates; it’s not a means of capitalizing on them.”

Mr. Oursler also sees a lighter side to the way technology will affect us. “We’re going to understand more what it is to be human,” he said. “At the same time, there’s a lot of responsibility that we have to then take for that technology, to understand it and to protect ourselves, our kids, our politics and creative drive.”

He said a theme of the show is “to take that stuff and turn it into art.” “Tony Oursler: Water Memory” will open on June 8.