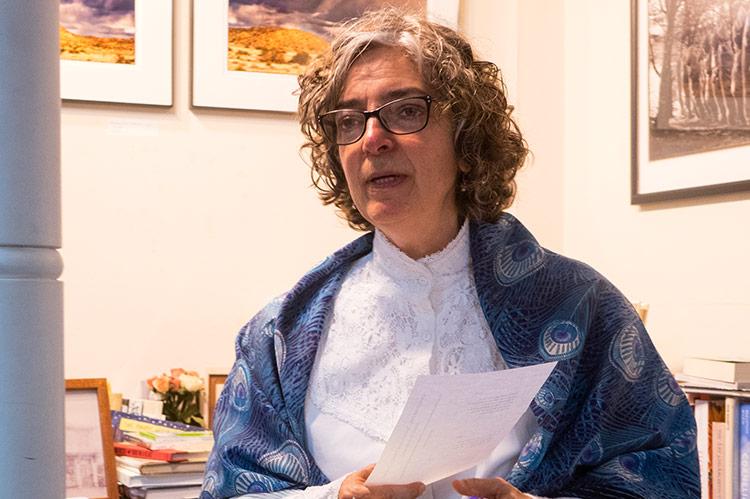 Maryann Calendrille, co-owner of Canio’s Books in Sag Harbor, dressed as Emily Dickinson and handed out copies of poems from a basket last month at the store’s literary costume party.
Kathryn Szoka
By Christine Sampson

Kathryn Szoka and Maryann Calendrille, who own Canio’s Books in Sag Harbor, are on a first-name basis with one of their favorite poets, Emily Dickinson.

“She’s a contemporary of Whitman, who everyone thinks of as America’s poet,” Ms. Szoka said, “but Emily is almost on another plane.”

“I just love the way Emily writes with deep affinity and deep connection with the natural world,” Ms. Calendrille added. “Her insight into complex topics and subject matter is so fiercely precise and startling.”

The two are such fans of Dickinson’s work that they will host a birthday party of sorts for her on Saturday at Canio’s. Ms. Dickinson was born on Dec. 10, 1830. On Dec. 7, from 4 to 6 p.m., there will be a mini-marathon poetry reading and refreshments. Guests can drop in for a short time or stay for the entire event.

There will also be a presentation titled “Fervent Skeptic” by Julie Sheehan, a poet who teaches in and oversees the undergraduate poetry program at Stony Brook Southampton. She is a devoted fan of Dickinson’s work.

“People often marvel our country produced two such singular poets — Emily Dickinson and Walt Whitman — at the same time. They couldn’t be further apart, aesthetically or as literary personalities,” Ms. Sheehan said. “Dickinson is often portrayed as reclusive and virginal, holed up in Amherst in her ghostly white dress, but recently a couple of films have come out to puncture that image, speculating about her sex life and casting her as a wry critic of 19th-century small-town morals. Her poems definitely support the latter view — she can be very sharp about conventional thinking. But mostly she’s profoundly strange, wholly original. Nobody wrote like her back then. Nobody writes like her today. She defies imitation.”

Ms. Sheehan called Dickinson “a school of one.”“I read and try to absorb her poems, but they defy me,” she said. “When I was younger, I disliked that resistance to the reader. Now I love it. . . . Her poems map out an imagination at work, a one-of-a-kind worldview I haven’t yet figured out. So I’m looking forward to gathering with other fans for another glimpse into her bottomless originality.”

Canio’s has had similar events before, modeled after the marathon poetry readings at Dickinson’s home in Amherst, Mass.

“I love the poet. I read her as a young person, but when we had the opportunity to visit her homestead in Amherst and participate in the marathon reading, which they do every fall, I had a whole new understanding or awakening or appreciation of Emily’s work,” said Ms. Calendrille, who dressed up as the poet for Halloween this year at the bookstore’s literary costume party. “There’s something about hearing it out loud, read in community, where the words really just flow over you and you appreciate them in a different way than when you’re reading it on the page.”

Ms. Szoka called Dickinson “a mystical poet for all ages” who “gets at the ineffable with a brevity of line.”

Dickinson wrote about nature, the universe, life and mortality, and theology, with a sparse but intimate style, unusual capitalization, and unexpected pairings of words. Her work is also rather devoid of contemporaneous references. In what’s considered her most famous poem, No. 254, she describes hope as “the thing with feathers.”

In another poem, No. 919, she lists some actions that would give life meaning. “If I can stop one heart from breaking . . . If I can ease one life the aching / or cool one pain / or help one fainting robin / into his nest again / I shall not live in vain.”

On Saturday the readings will be from the collection “The Essential Emily Dickinson,” edited by Joyce Carol Oates. Copies will be available for purchase. There will also be baked goods as an homage to the poet, who liked to bake, as well as a jasmine tea blend by Simpson & Vail, a company that makes teas inspired by Walt Whitman, James Joyce, Charles Dickens, and others.

“There’s an alchemy that happens when you sit in a circle and read poem after poem after poem,” Ms. Szoka said. “Some people who are not native English speakers are reading. Some people are professors and they are reading. It’s complex in a way that you wouldn’t imagine it would be. Hearing the work over the course of hours kind of builds a foundation of understanding