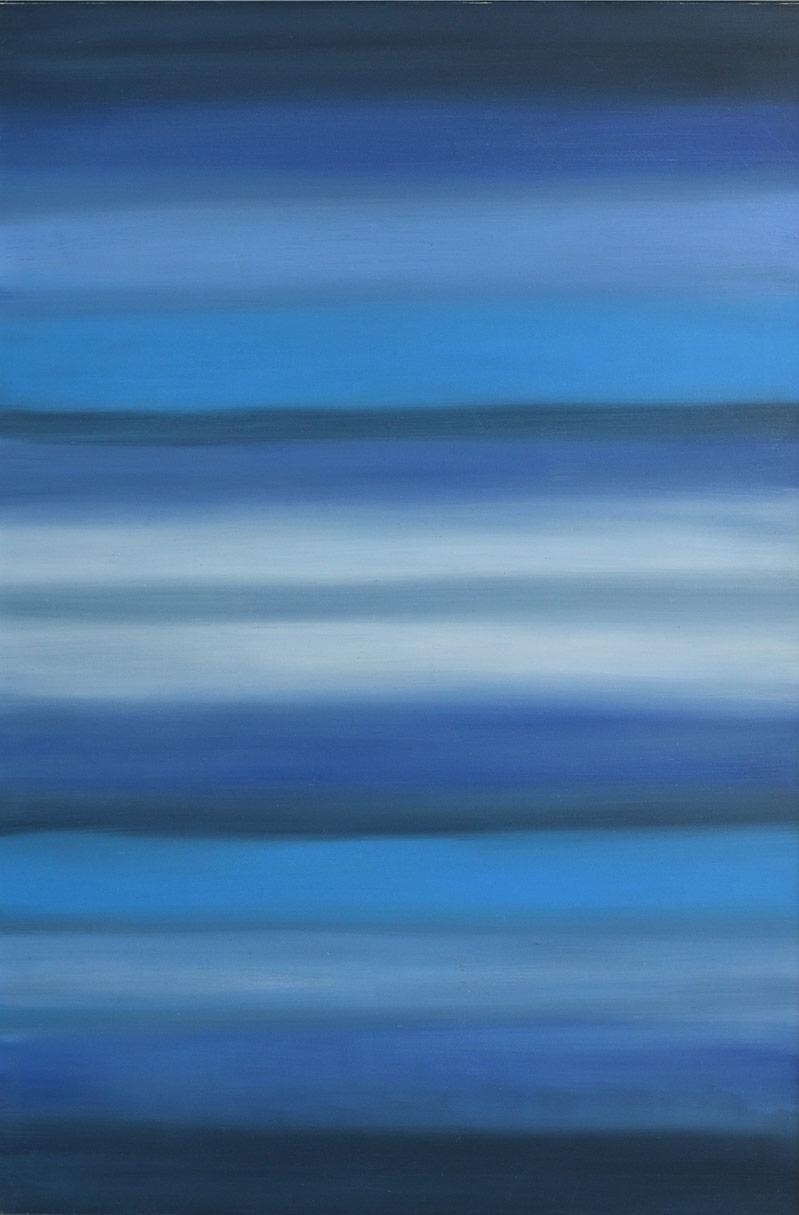 Coco Myers said that when organizing the exhibition that became “For the Love of Painting” at Folioeast in East Hampton, she was inspired by painters who had been working for some time but had departed from their regular practices. The work the artists brought in was so fresh, in fact, that some of the paintings finished drying on the gallery walls.

So what do we have here? Shari Abramson, Michele D’Ermo, and Janet Jennings are all working in some form of abstraction that might also respond to landscape and/or the figure.

Ms. Abramson’s newest paintings share a cohesive palette of plums, pinks, mauves, and white, using mostly color to create darker tones and shadows. The larger canvases, “Inside Buddha’s Head” and “Dream Reflections,” seem to represent faces or facial features — one of a dog in the case of the former, and one of a human in the latter.

They have a moody, hazy atmosphere and summon up the subconscious.

“Inside Buddha’s Head” has a Georgia O’Keeffe vibe, conjuring a looming animal head over an uncertain background. In “Dream Reflection,” the canvas divides roughly into thirds, with a dark twilight kind of sky at top, a middle section of cloudy white, and what appears to be the suggestion of two eyes.

Ms. Abramson’s smaller works, 12-inch-square canvases, evoke studies of objects placed in interiors. But just as soon as these impressions appear, they also dissolve, leaving an intriguing enigma in their wake.

Compared to her older work, there is a definite shift here. Her paintings from a couple of years ago are more loosely organized, with the occasional use of strong linear elements, while these are blockier and more grounded in most cases.

Ms. D’Ermo’s most recent work indicates a marked shift as well. The artist has ordered her hazy and loose landscapes, often images evoking the ocean and waterways of the East End, around a horizon line. As such, they can be almost as abstract as a Mark Rothko painting, but more referential.

The latest works play with these compositional and stylistic modes. It begins as a subtle departure in “Moody Blue,” which refers to landscape in its ordering of compositional elements, but they open up and blur. A great expanse of white takes up most of the space, which employs her usual horizontal orientation. But the white doesn’t replicate or even refer to a typical cloud. If anything, it is more like a mushroom cloud, something capable of overcoming or obliterating things.

But then Ms. D’Ermo moves very rapidly into a significant departure. Now, the works stand tall on canvas or linen. One is even square. In “Into the Sea,” she hardens her subtle striations into real horizontal bands that no lon­ger carry direct ties to the landscape,

despite the painting’s title. The even patterning from top to bottom asserts the artist’s own vision, taken out of a realistic context. In the square work, “Untitled I,” the stripes become even sharper and now move vertically.

“Voyage,” which may or may not be the last work Ms. D’Ermo painted this year, feels like the fullest realization of this new direction. She has returned to an atmospheric vibration in the painting, but this almost seven-foot-tall work has left earthly concerns behind. A wide and fiery red-orange central swath is held back by deep blue sides, but just barely.

Ms. Jennings’s works in recent years have moved from recognizable landscapes bathed in atmosphere to close distillations of them, heading more and more into the abstract. These examples are a good foil for Ms. D’Ermo’s paintings, although Ms. Jennings’s remain horizontal in their composition.

Capturing a period from 2015 to 2019, the works show the artist returning again and again to a sea study that can dissolve into soft linear bands as quickly as it falls into focus on a stormy sky with light bay waves accumulating in the foreground. Titles such as “Sagg Fog” and “Sea Cloud” from this year seem to ground them into a sense of reality. “Sea Smoke,” from 2017, and “Dream Wave,” from 2018, highlight the artist’s tacks in a more imaginative direction.

The exhibition will remain on view through Dec. 8. A post-Thanksgiving reception will be held on Friday, Nov. 29, from 5 to 7 p.m., with the artists present and an extended view of their work.