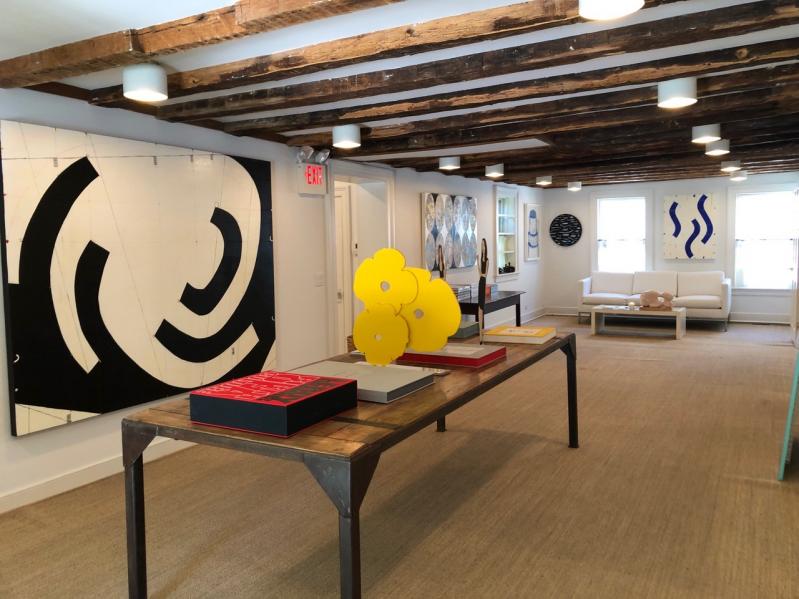 ARC Fine Art has opened on Main Street in Amagansett and is showing the work of many artists, including Caio Fonseca and Donald Sultan, foreground, over several rooms in a charming old house.
By Mark Segal

ARC Fine Art, which was established by Adrienne Ruger Conzelman in Fairfield, Conn., in 2009, has opened for the summer on Main Street in Amagansett, where it will present rotating exhibitions drawn from work by three dozen artists, many from the East End.

The Arts Center at Duck Creek in Springs will open an exhibition of paintings by Hiroyuki Hamada with a reception on Saturday from 5 to 7 p.m. The show will continue through June 23.

The paintings, many of which are black and white, feature inscrutable, abstract forms deployed in compositions that suggest imaginary landscapes or still lifes. The work makes visible his interest in creating art “that remains mysterious and elusive.” Mr. Hamada, who lives in East Hampton, will discuss his work on June 22 at 3:30 p.m.

Recent alabaster sculpture by Aya Miyatake will be on view at the Drawing Room in East Hampton from tomorrow through June 30. Born in Japan, Ms. Miyatake studied stone carving after moving to the United States and discovered an affinity for the time-consuming process. In her new work she “seeks to reveal movement, explore the color, and release the light within the ultimate form she gives each alabaster,” according to the gallery.

“Divine Intervention,” an exhibition of installations, paintings, photography, sculpture, and books by 34 artists from the East End and New York City, will open on Saturday at Christ Episcopal Church in Sag Harbor with a reception from 5 to 7 p.m. and remain on view through Sept. 2.

Organized by Teri Hackett, an artist herself, the exhibition will make use of the architecture of the church, including the altar, corners, niches, arches, and pews. Fifty percent of all sales of artwork will benefit the Community Cafe, which serves those in the Sag Harbor area who are lonely or hungry.

The East End Photographers Group will hold its 31st spring exhibition on Saturday and Sunday from 10 a.m. to 5 p.m. at Ashawagh Hall in Springs. A reception will take place on Saturday from 5 to 8. Organized by Marilyn Stevenson, the show will feature work by 19 photographers, among them Ann Brandeis, Gerry Giliberti, David Gilmore, Helen Jason, Joel Lefkowitz, Rosa Scott, Nick Tarr, and Ms. Stevenson.

The Rental Gallery has returned to East Hampton with “I’m Made of Water,” a group exhibition that will be on view through June 17. The show includes work by 20 artists, among them Georg Baselitz, Jane Corrigan, Maia Cruz Palileo, Cheyenne Julien, Robert Longo, Sarah Lucas, Jamea Richmond-Edwards, Frank Selby, Henry Taylor, and Cameron Welch.

The Ezra Gallery of the Hamptons has reopened at the Center for Jewish Life in Sag Harbor under the curatorial direction of Kimberly Goff. The first show, “For Love of Nature,” will open with a reception on Sunday from 4 to 6:30 p.m. and continue through July 8 with work by Bertram Alper, Shain Bard, Sally Breen, Miriam Dougenis, Edward Joseph, Bruce Lieberman, Eileen Dawn Skretch, and Ms. Goff.

An exhibition of work by seven East End artists is on view at the Romany Kramoris Gallery in Sag Harbor through June 13, with paintings, photographs, and works on paper by Christopher Engel, Franklin Engel, Kelly Nelson, Diana Malcolmson, Alan Nevins, Barbara Groot, and Heidi Rain.

Jeremy Dennis will give a gallery talk on “Thomas Joshua Cooper: Refuge” tomorrow evening at 6 at the Parrish Art Museum in Water Mill. Mr. Dennis, an artist and member of the Shinnecock Nation, will reflect on Mr. Cooper’s photographs, which capture East End history, migration, and settlement at sites ranging from Conscience Point to the Shinnecock Reservation.

A solo show of work by Frank Wimberley will open today at the Berry Campbell Gallery in Chelsea with a reception from 6 to 8 p.m. and continue through July 3. Known since the 1960s for his dynamic, multilayered abstract paintings, Mr. Wimberley, who lives in Sag Harbor, takes the theme of each painting from the first stroke he lays down and follows it to its conclusion, not unlike improvisation in jazz.

Richard Prince is one of six artists invited by the Guggenheim Museum as a guest curator for “Artistic License: Six Takes on the Guggenheim Collection.” On view through Jan. 12, it is the first artist-curated exhibition ever mounted at the museum.

Mr. Prince, who has a house in East Hampton, selected works from the museum’s holdings of abstract painting and sculpture from the 1940s and 1950s by Marcel Barré, Conrad Marca-Relli, and Georges Mathieu, among others.