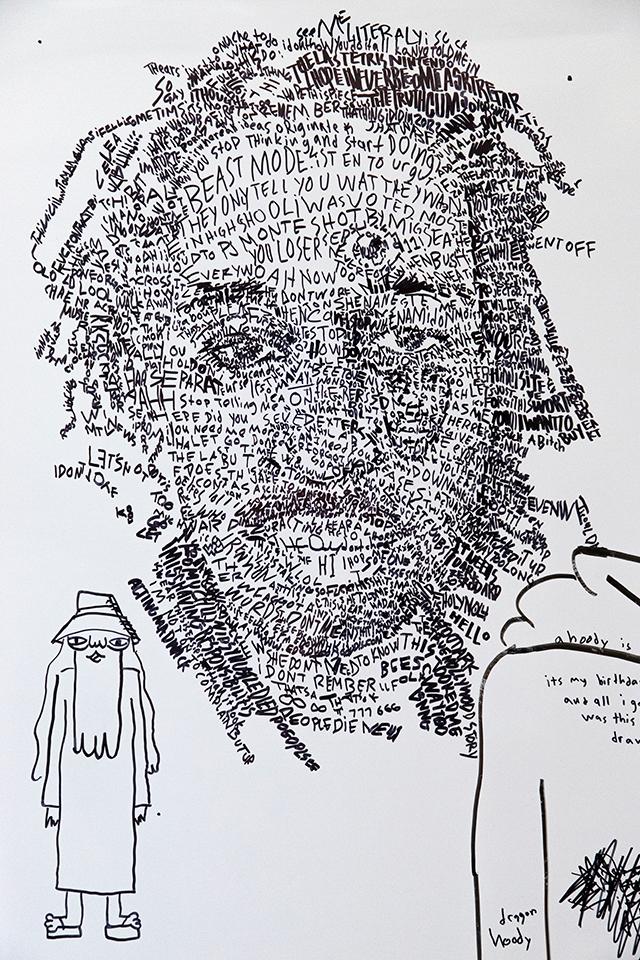 A detail of a whiteboard drawing, “Don’t let the outside world affect ur innards,” by Yung Jake from this year.
By Jennifer Landes

An artist who paints and sculpts with light and a young multihyphenate creator of art and music will each take over a portion of the Guild Hall museum galleries beginning on Saturday.In an installation called “Phosphene Dreams,” Christine Sciulli will use projected light and suspended fabric to craft an immersive work that will transform the space of the room, inhabiting it with lines of light and softly molded shapes and shadows.Yung Jake’s show, “Cartoons,” will focus on new works that revolve around themes and characters from his animated stories. Kelvin, the central character in these stories, is used to examine issues related to the environment, culture, and society. Video, drawings, and an installation will turn the galleries into a world he has created.Since graduating from Cal Arts in 2012, Yung Jake has had his work exhibited in 11 solo shows in Los Angeles, Berlin, and Southampton, as well as the Sundance Film Festival. He has performed at the Museum of Modern Art, the Getty Center, and other art institutions, and his emoji portraits, in which he creates likenesses of celebrities from the worlds of entertainment and sports and popular culture generally, are widely followed on Instagram. They were displayed as digital paintings at the Tripoli Gallery in Southampton. Tripoli Patterson, the gallery’s owner, is his brother.Yung Jake is the public artistic persona of Jake Patterson, who grew up in Bridgehampton and Sag Harbor, among a number of other far-flung places, including Bali, Geneva, and Costa Rica.Ms. Sciulli has installed her works on the South Fork at the Parrish Art Museum, the barn at Duck Creek, the Southampton Arts Center, and the South Fork Natural History Museum, where she was an artist in residence, as well as in New York City, Denmark, and Germany, among other places. She is now showing her work at Indiana University in Indianapolis.The exhibitions will remain on view through May 27. Individual gallery talks with the artists are planned for the weekend of May 4.

New Dog Agility Park, Community Garden Sale in Montauk
HarborFest Is Canceled
Few Fireworks on South Fork This Year
Easing Stress on the Environment, One Flush at a Time
END_OF_DOCUMENT_TOKEN_TO_BE_REPLACED