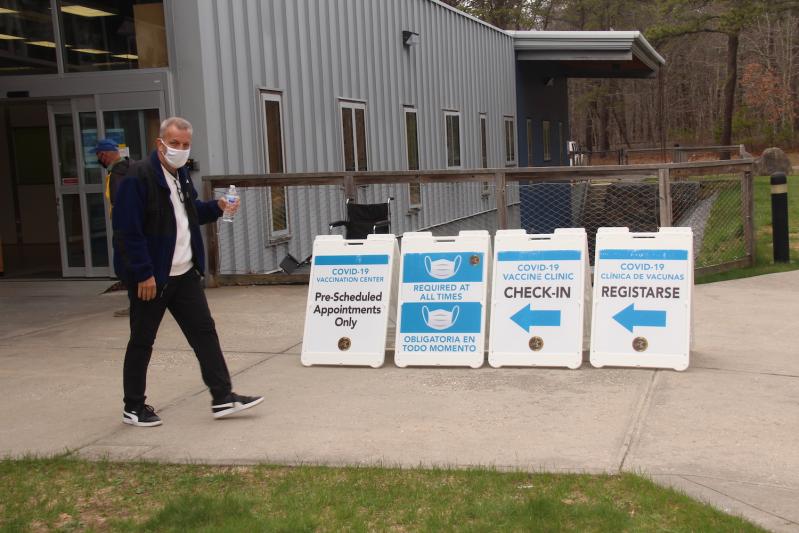 East Hampton Town held clinics on Saturday for people to get their first and second doses of Pfizer's Covid-19 vaccine.
Durell Godfrey

On a seven-day average, Long Island's test-positive rate, meaning the number of confirmed Covid cases as a percentage of the total number of tests given, was 3.1 percent on Monday morning; Suffolk's rate was 3.33 percent. That is still on the high end when compared to many of the regions across the state, where it varies from .86 percent in the Southern Tier to 4.78 percent in western New York. Statewide on Monday, the positivity rate was 2.9 percent, the lowest since Nov. 13.

"Your community determines your positivity rate. . . . Your behavior determines your infection rate," Governor Cuomo said during a press conference. "This has been a constant adjustment dealing with Covid. Watch the dials, watch the gauges. . . . That informs you as to the calibration of economic activity vs. protections. The numbers are stable and going down."

In Suffolk County, the seven-day average positivity rate was reported as 3.4 percent on Sunday, although the single-day positive rate was approximately 2.5 percent -- 395 positive tests out of 16,099 tests given.

As of Sunday, 41.4 percent of New Yorkers had gotten at least one dose of a Covid-19 vaccination and 28.1 percent were fully vaccinated. East Hampton Town held clinics on Saturday for people getting their first and second doses of the Pfizer vaccine. Today, Stony Brook Southampton Hospital is overseeing a clinic at the Greek Orthodox Church of the Hamptons at 111 Saint Andrews Road in Southampton. As of 12:30 p.m. Monday, there were still more than 100 appointments available for the Pfizer vaccine. Appointments are required, and can be made by clicking here.

In other state news, Governor Cuomo signed legislation that drops state income tax rates for people in certain income brackets. People earning salaries between $43,000 and $161,550 will see their income tax rate decrease from 6.09 percent to 5.97 percent. People earning up to $323,000 annually will also see a small tax cut. These changes are expected to impact 4.8 million New Yorkers. A property tax credit will also be instituted for homeowners making up to $250,000 annually.