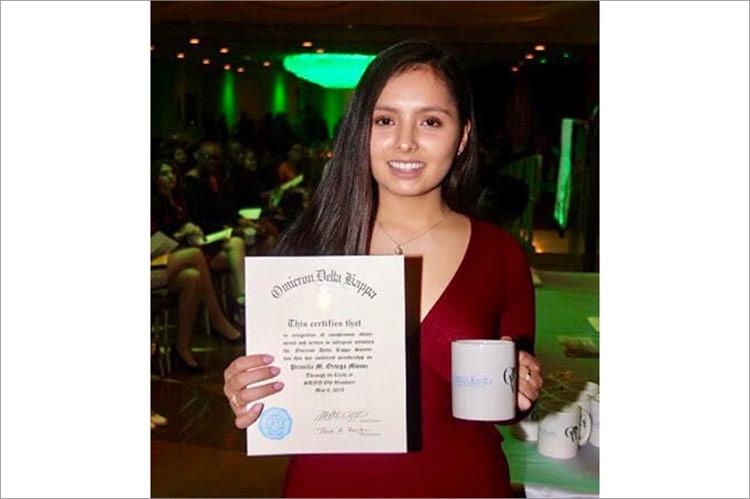 There’s much more to Priscila Ortega than simply her status under a federal immigration program called Deferred Action for Childhood Arrivals, commonly known as DACA.

Ms. Ortega is an honors student at the State University at Old Westbury, set to graduate in December, a semester early. She’s a leader in groups and activities on the campus, and was a member of the Old Westbury team that won a national college competition called Up to Us. She led an effort to expand library hours on campus, is an advocate for immigrant rights, and is a volunteer locally with Organizacion Latino-Americana of Eastern Long Island.

And through it all, she has worked a part-time job to help pay for college.

“I’ve always liked a tight schedule, so when I have free time I go out of my way to put myself where I need to be,” she said. “It would be silly for me not to jump in, into new experiences. I enjoy it and feel my best when I’m doing all these extracurriculars and helping everybody because it’s my passion.”

Ms. Ortega’s hard work has earned her a prize awarded to just seven SUNY students across the entire state, the Act for Excellence and Student Initiative Scholarship. More than 600,000 students are enrolled in the 64 SUNY colleges and universities. The $1,000 scholarship is helping her finish her studies at Old Westbury, she said.

But she has become just that, having served as president of the student club Alianza Latina, for which she helped organize a two-day symposium on “Central America in Crisis.” She also was a founder of the Undocumented Student Alliance, which assists students with DACA status as well as those who arrived after 2008 and are now not able to access the program because of changes at the federal level.

Calvin O. Butts III, the president of Old Westbury, wrote a letter of support to the SUNY trustees describing Ms. Ortega as “devoted . . . to civil discourse and the educational efforts that inform and provide the intellectual and humanitarian context for the crisis in Latin America.”

“Priscila embodies the college’s historic social justice mission to ‘build a more just and sustainable world,’ ” Mr. Butts wrote. “Her leadership and scholarly activism on the campus has contributed to intercultural understanding within our campus community.”

Ms. Ortega shies away from talking in depth about her own immigration status or her family’s story because she — like many — is afraid doing so will have negative implications. But she does talk about some of her own experiences to shed light on a subject she says is frequently misunderstood by the immigrant community — a population that is often vilified by the media and elected officials. She wants to paint a picture of hope for people in similar circumstances.

“When people hear our stories, not just mine but also my peers’, it gives kind of a light that you can one day accomplish similar, or more,” she said. “We tell our story in the hope that it will alleviate some type of pain or fear. . . . It’s hard for young people with that mentality to keep pushing.”

Ms. Ortega, a politics, economics, and law major with a minor in public policy, is now studying for the law school entrance exam, the LSAT. She plans to take a year off from school to work on her law school applications and simply “be a 21-year-old,” and hopes to find a job in the legal field in the interim.

She said she would continue to advocate for herself, her peers, and the immigrant community at large.

“It’s a very uncomfortable situation. I don’t choose to live in the shadows. DACA has been a blessing, but it’s not enough,” Ms. Ortega said. “I could have all the money in the world, but it’s not enough if there is no legislation and options for us. I want people to realize that we’re not here to steal anything — we’re here to work hard, pay bills, pay taxes, and be as American as you can be.”