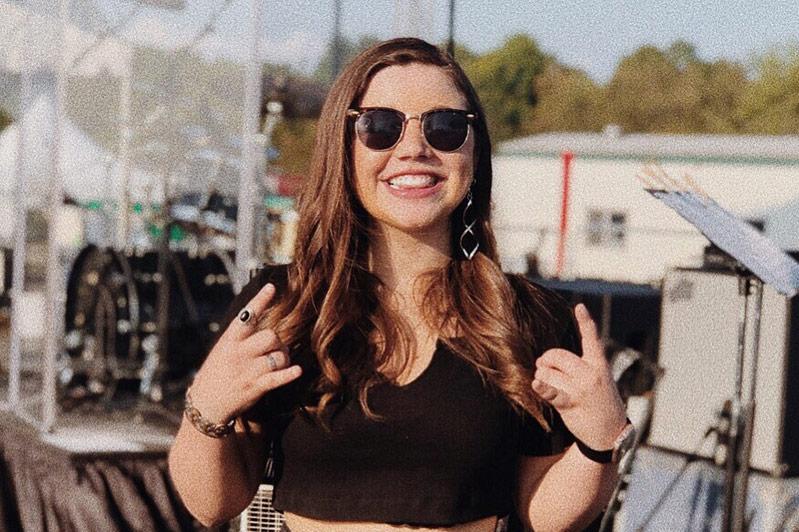 Amanda Ayala, known for her appearances on “Who Will Rock You?” and “The Voice,” will appear at The Spur in East Hampton on Saturday.
By Christine Sampson

Amanda Ayala has performed on big stages in Nashville, New York City, Hollywood, and Orlando, Fla., and smaller stages throughout the Northeast, but never in East Hampton. In fact, she’s never even been to East Hampton. That will change Saturday when the singer brings her pop-rock sensibility and buoyant performance style to The Spur’s Summer Music Party.

“I’m looking forward to it,” Ms. Ayala said by phone last week. “I would love to go to the beach before or the next day. I want to make a trip out of it, go to some nice restaurants. I’ve heard it’s very fancy out there.”

The singer-songwriter is known for her appearances on season 9 of “The Voice” on NBC-TV and season 2 of “Who Will Rock You?” on Amazon Prime, earning a place in the music industry with covers of “Mississippi Queen” by Mountain and “Edge of Seventeen” by Stevie Nicks. Both renditions landed on the iTunes Top 100 Rock Chart, and her video for “Mississippi Queen” has racked up more than 1.2 million views on YouTube.

More recently, her original single “Lost You” is being played on popular radio stations across the United States.

“It’s been doing really good,” Ms. Ayala said of “Lost You,” a moody tune of the getting-over-you variety. “This is the most reception I’ve received out of the material I’ve written. It’s really gratifying to know that so many people are relating to it. That, as a songwriter and musician, is the best feeling.”

The inspiration for “Lost You” came from a “very vulnerable spot in life,” she said. “It’s for anyone who has ever lost someone too soon, and you’re not ready to let go, and you’re holding on to their memory. It came from a very honest and open place. It allowed me to fully invest my emotions in it.”

She has sung opening acts for Expose, Dee Snider, and Taylor Dayne, and once shared the stage with Ms. Dayne for “Love Will Lead You Back,” the classic 1989 pop hit. Her connection to Ms. Dayne came after she nudged her way into the singer’s dressing room at the urging of her mother.

“I always say with each opening act that I do, I gain more knowledge about the industry,” Ms. Ayala said. “One of the biggest things I took from [Ms. Dayne] was to never be afraid to take a risk and fail, because you might never have that opportunity again.”

Her experience on “The Voice” — where her TV appearances began, with a performance that turned the chairs of Adam Levine, Blake Shelton, and Pharrell Williams — gave her the most exposure she’d ever had. She said her TV experiences gave her the ability to perform under pressure.

“I was learning and growing from those experiences — how to adapt into any type of situation, adjusting your mentality, going out there and giving it your all,” Ms. Ayala said. “There’s so many great people out there that were competing and all want the same thing, so I have to work that much harder to achieve the goal I want to achieve.” And, “it gave me a taste of what the future could be for me.”

“It really put my foot in the door in all the right places,” she said. “I was able to work with professionals on a completely different scale than I was used to. I was opened up to so many different genres as well.”

Hailing from Putnam County, N.Y., Ms. Ayala, 21, first got a taste for singing from her brother, Ronny Ayala, who is now her manager. “He was the first singer in the family. Like any little sister would, I wanted to do what my older sibling did.”

On Saturday, she will headline a show that includes Christiaan Padavan, 20, a singer from Hampton Bays who appeared on “American Idol” earlier this year. Ty James, a rapper who alternates between low-profile street anthems and R&B ballads, and Soulex, a singer, songwriter, storyteller, and musician, will also perform.

The Spur’s Summer Music Party is from 7 to 11 p.m. at its East Hampton location, 44 Three Mile Harbor Road. Tickets are $35 to $50 and can be purchased online at summermusicparty.com.