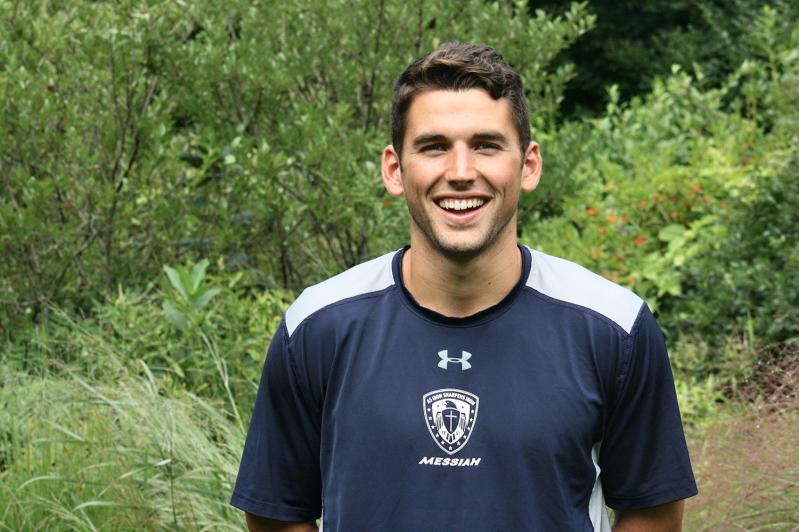 When Nick West led Messiah to a national championship in 2018 he had long hair and a beard, much as one would associate with the college’s namesake.
Jack Graves
By Jack Graves

Nick West, a recent graduate of Messiah College in Pennsylvania who was the nation’s leading scorer (30 goals and 6 assists) in men’s soccer this fall, has signed a contract with Stumptown Athletic of Charlotte, N.C., an entry in the newly formed National Independent Soccer Association.

In a conversation at The Star last week, the day before he was to drive his Subaru Crosstrek packed with all his things to Charlotte by way of Messiah, the personable striker (or “target,” as they are now called), who hails from what is arguably East Hampton’s most athletic family (his sister, Ashley, an all-region track star when at Susquehanna University, was married here last week to Kevin Harvey, a fellow runner whom she met while working at Gubbins Running Ahead here, and his brother, Brandon, tended goal for two national-championship Messiah teams), said he’d almost given up on playing professionally when the call from Stumptown’s coach, Mark Steffens, came.

He had, he said, tried out for the Charlotte Independence, which plays in the United Soccer League, and for the Pittsburgh Riverhounds S.C., also of the U.S.L., which is one tier below Major League Soccer.

“I was offered a contract by the Riverhounds, and Charlotte Independence invited me to come to the preseason, but there wasn’t a lot of money involved in either case, minimal money really, so I wasn’t planning on playing — I was planning on working at a bank in Camp Hill, Pennsylvania, as a credit analyst. . . . I majored in business and finance at Messiah.”

But now banking can wait. “The head coach of Stumptown had seen me play in the Independence tryout and offered me a yearlong contract — decent money, enough to live on. I signed it two weeks ago. . . . I’m very pleased, really happy. I’d much rather wake up and get paid to play soccer than put together loan packages.”

West’s shots-on-goal percentage — 69.8 percent at one point last fall vis-à-vis most other strikers’ 25 percent — impressed him the most, Messiah’s coach, Brad McCarty, said in an email after the former Bonac star — apparently the first homegrown soccer player here to play the sport professionally — had scored his 19th goal of the season during the course of McCarty’s 200th victory as the D-III college’s head coach.

At the time, Rich King, West’s head coach when he was a student here, said he wasn’t surprised he was leading the nation in scoring, and added that as for playing professionally one day, “I think Nick can do anything he sets his mind on doing.”

Don McGovern, King’s former assistant, who is now East Hampton High’s head coach, and who has coached West in local youth and travel league soccer ever since he was 8 years old, said this week, “When he came back to East Hampton he began coming to our workouts, and he was with our U-17 team when it won the Long Island Cup in June — he was part of it, and he’s been to many of our workouts. He’s had a great influence.”

“It’s one thing for a coach to say something, but when a kid they look up to says the same thing, they listen. They look up to him. Here’s a kid who has gone upstate, who has been on league, county, and Long Island championship teams, and who has played on a national-championship team [in 2018]. They know now what it takes to do that — a tremendous amount of hard work, frankly. His dedication to working hard on his own is unmatched in my experience. . . . He’s a great young man, a great athlete, and a fantastic person. We’re all so happy for him, but it’s not surprising. He’s always had a drive, a drive to play at a higher level.”

While the new league, which is to begin play next month, is the third level of professional men’s soccer in this country, one couldn’t compare it to AA minor league baseball, West said, in answer to a question, given the fact that none of the U.S.L. or N.I.S.A. teams were affiliated with M.L.S. ones.

Asked what it was he loved about soccer — a game he grew up playing here — West said, “I’d say it’s the feeling of freedom you have, the joy of being in a team environment . . . soccer was always attractive to me. I never was into Little League. Soccer has less structure . . . you can be more creative.”

“This could kick-start my soccer career or be a one-off — I’m trying to take it one step at a time,” he said when asked where he saw himself 10 years hence.

McGovern, when questioned, said he thought the level of play in the new 10-team league (which has entries in San Diego, Los Angeles, Atlanta, Miami, and Philadelphia, among other cities) would be good, and that he thought West would progress. “You can never count this kid out.”

Stumptown’s first game is to be in Philadelphia on Sept. 7.

“And the championship game is to be in Philly in November,” said McGovern.