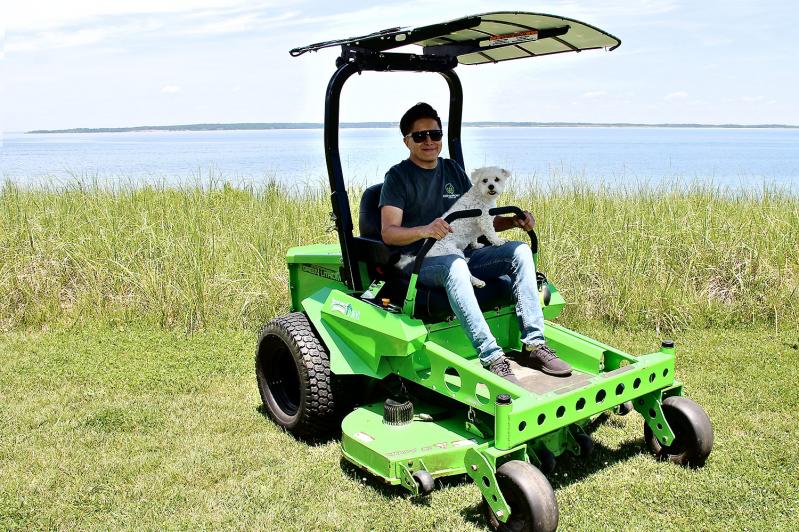 Paul J. Muñoz was trying to relax while recovering from hernia surgery at home in Springs recently when all he could hear was the sound of leaf blowers and mowers. “It was very loud and annoying. I thought there’s got to be a better way.”

Mr. Muñoz, an East Hampton High School graduate, has a mechanical engineering degree from the State University at Binghamton, to which he transferred after running out of money at Cornell. Mechanical engineering, he said, is about problem solving, he said, and he started researching noise-reduction options and cleaner landscaping alternatives, something he knew a little about from former summer jobs.

In September 2017, he founded Eco Harmony, a landscaping company that uses battery-powered equipment as much as possible and limits the use of gasoline. He invested in a fleet of Mean Green Mowers, which are mostly electric. One of his sit-on mowers is solar-assisted (the solar panels above the seat act as a shade too).

An Environmental Protection Agency study found that a three-horsepower mower emits the same air pollution as 11 cars driving 55 m.p.h. A commercial, zero-turn, gas mower with 24 horsepower equals 88 cars at 55 m.p.h. And residential gas tractor mowers are not much better, with 18 horsepower, the equivalent of 66 cars at 55 m.p.h.

According to the California Environmental Protection Agency’s Air Resources Board, which looked at small off-road engines like those primarily used for lawn and outdoor work, operating the best-selling commercial lawn mowers for one hour emits as much smog-forming pollution as driving the best-selling 2016 passenger car, a Toyota Camry, about 300 miles. The best-selling commercial leaf blower, the board said, in use for an hour emits smog-forming pollution comparable to the Camry traveling 1,100 miles.

Through market research, Mr. Muñoz said he found that the biggest complaint about gas-powered landscaping equipment is its noise. “The emission is secondary to them. There is such a thing called noise pollution, so they have a right to be worried.”

The loudest his mowers get is 80 decibels, while a typical gas-powered mower emits 95 to 100 decibels, he said. “The number fools people,” he said, but for every 6 decibels of sound, noise doubles to the ear. “So, our 80db mower is less than half the noise of a 86db mower,” a pamphlet for his business says.

Just recently, Mr. Muñoz was on a job. A neighbor came around the bend and said, “I didn’t even know you were mowing until I saw you,” Mr. Muñoz recalled, adding that a gas weed whacker is louder than his biggest machine.

Unfortunately, battery-powered landscaping equipment and commercial-grade leaf blowers cannot do the job for big fall or spring cleanups — and that’s the only time Mr. Muñoz uses them, he said, as a last resort, adding that the technology keeps improving.

One of Mr. Muñoz’s clients has about a five-acre lawn. “I came up with a technique, since my mower is battery-powered with no emissions,” he said. “I found a lawn sweeper, and I attach it to the mower and it sweeps up in the back.” This cuts down on the amount of leaves left and minimizes the use of a gas-powered blower.

“More times than not, the solutions are not that hard. It’s not rocket science. Taking the time to scan and evaluate properties in this case and find out what tools are at your disposal. I still feel that even though I’m not doing engineering now, I’m solving a problem.”

In addition, Eco Harmony uses no toxins or chemicals. Mr. Muñoz is certified through the Northeast Organic Farming Association, which educates farmers, gardeners, consumers, and land-care professionals and offers principles to follow.

his gravel driveway,” he said. The client asked,

“ ‘Wouldn’t it be quicker for to you throw down some Roundup?’ ” Mr. Muñoz explained the harmful effects of such chemicals, and why they should not be used where his children and pets walk, as well as the possible groundwater contamination risks. Instead, his company takes the time to hand-pick weeds or spray vinegar on them, which works to burn them out on a hot summer day.

“We take into consideration the social and ecological impacts of materials or the techniques we use,” Mr. Muñoz said. He enjoys educating clients or potential clients, as well as fellow landscapers — some of whom risk hearing and other health problems because of gas-powered equipment — that these options exist. “I think it’s not just that people don’t want to do it or don’t see the benefit, I think some people straight up don’t know about it.”

Mashashimuet Park's History and Future
A Conference for Young People to Create Solutions
Get Outside, Get Moving
END_OF_DOCUMENT_TOKEN_TO_BE_REPLACED