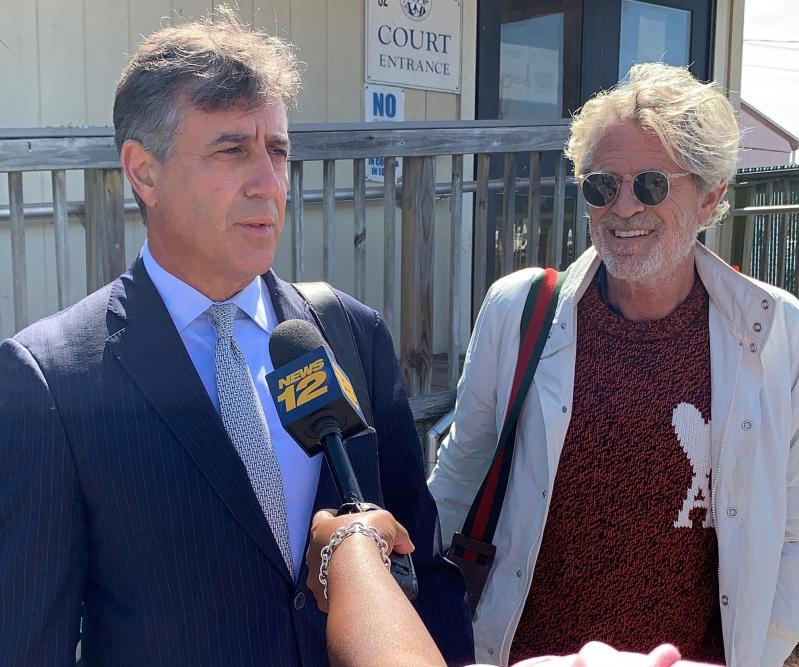 Southampton Town Justice Barbara Wilson called the driver arrested Tuesday in connection with a Bridgehampton crash that sent a mother and young child to the hospital "a danger to this community" during his arraignment on Wednesday.

Robert K. Futterman, 60, the former head of a New York City real estate brokerage who has a history of drunken-driving-related arrests, has been racking up charges on the South Fork in recent weeks. He stood before Justice Wilson at the court in Hampton Bays on Wednesday morning in handcuffs, looking disheveled in a sweater, tattered jeans, and flip-flops, as he faced his latest charges: driving under the influence of drugs, as a felony due to a prior felony conviction, two counts of criminal possession of a controlled substance in the seventh degree, a misdemeanor, and unlawful possession of marijuana, a violation.

Rudy Migliore Jr., a Suffolk County assistant district attorney, said Mr. Futterman was "high on marijuana" and admitted to taking clonazepam, a controlled substance that can treat panic disorders and anxiety and can cause poor coordination and judgment, at the time of the accident Tuesday morning. He was also said to be in possession of T.H.C. and vape pens. His attorney Edward Burke Jr. entered not-guilty pleas to all the charges.

According to Southampton Town police, Mr. Futterman was behind the wheel of a 2019 Ford F-150 pickup truck where Newlight Lane meets Montauk Highway. There is a stop sign on the side road, but no traffic light. Police said Erica Bermeo Palacios, 31, of Morristown, N.J., had been headed north on Newlight Lane in a 2008 Nissan Altima when she entered the intersection and collided with Mr. Futterman's eastbound truck at about 11:25 a.m.

"My client was not at fault," Mr. Burke told Justice Wilson at the arraignment, referencing the fact that Ms. Palacios had entered the intersection.

The Bridgehampton Fire Department had to use its heavy rescue tools to extricate Ms. Palacios from the Altima, which had sustained severe damage to its driver's side. The front end of the bright blue Ford pickup was completely smashed in. Airbags deployed in both vehicles.

Ms. Palacios and her 3-year-old son were airlifted to Stony Brook University Hospital, a level-one trauma center. "Their injuries were determined to be minor," police said in a press release on Tuesday evening. Her Altima and Mr. Futterman's pickup truck were impounded.

Video from an eyewitness showed that Mr. Futterman, who was not taken to the hospital, was given a field sobriety test, and had difficulty walking a straight line.

The prosecutor told Justice Wilson that Mr. Futterman refused a blood test, which police would have used to determine the exact types and amount of drugs in his system. A drug recognition expert, Southampton Town Police Officer Keith Phillips, felt he exhibited signs of being on a central nervous system depressant (which clonazepam is) and cannabis, Mr. Migliore said.

Mr. Burke wanted it on the record that his client is on prescription medication and that he had not only passed a breathalyzer test, but that it gave a zero reading.

Justice Wilson said he should not have been behind the wheel if he was on prescription medications, "be they prescribed or otherwise."

Just a few hours before the accident, at about 8:45 a.m., East Hampton Town police pulled Mr. Futterman over in the pickup truck on the Napeague stretch in Amagansett. He was issued four traffic violations. Mr. Futterman was also free on bail following a July 16 charge in Sag Harbor Village of operating a vessel while under the influence of alcohol or drugs, also known as boating while intoxicated, a misdemeanor under New York State Navigation Law.

Justice Wilson was disturbed not only by the Tuesday charges, but also by a slew of open dockets in courts across the South Fork, including the boating while intoxicated charge and numerous traffic violations. Mr. Futterman has a prior felony D.W.I. conviction dating back to 2012 under Leandra's Law, which makes it a felony to drive intoxicated with children under 16 in the vehicle. Although Mr. Burke argued that his client always returns to court and has no history of warrants, Justice Wilson said it was his disregard for the courts' orders and the "disregard for the safety and welfare of the community" that upset her.

Between the end of May and the end of June, he was charged at least four times with driving without an Interlock device, which requires drivers to blow into it to detect if there is alcohol on their breath before the car ignition will start.

Mr. Burke told Justice Wilson it was a "glitch" in the system and that the requirement for an Interlock should have expired in 2012 after just six months. After finding out it was coming up in the State Department of Motor Vehicles system, he obtained a certificate of disposition, which he presented to the justice, to prove his client was no longer required to have the device.

Justice Wilson also had questions about Mr. Futterman's living situation and work status. While he owns a house on Paumanok Road in Sag Harbor, he is living in a rental in Montauk, and Justice Wilson wondered why. Mr. Burke said it was just a summer rental and that he also co-habitates with his former partner at their apartment on West 13th Street in Manhattan. No family members were present in the courtroom.

With regard to work, Mr. Burke referred to his client as a commercial real estate broker, but Justice Wilson asked which brokerage holds his license, a question that was never quite answered. Mr. Burke explained that his client had been "let go" from his brokerage after it was acquired by a new company.

"So no one is holding his license? So he doesn't have his license." Justice Wilson said.

In the end, Justice Wilson set bail at $50,000 cash or $100,000 bond on the felony charge, plus $5,000 on each misdemeanor, which was requested by the assistant district attorney, though she said she was surprised he had not asked for more. Mr. Futterman posted bail at the courthouse. Justice Wilson also ordered he wear a GPS bracelet to monitor his whereabouts, something Mr. Burke objected to.

"You don't get to decide if you drive. You cannot drive in the State of New York, period, end of story. . . . Is that clear to you?" she asked Mr. Futterman. He said it was.

"I don't even want you on a bicycle with one of those batteries," she said to him.

When Mr. Futterman was taken out of the courtroom, Justice Wilson turned to Mr. Burke and said, "I recommend you have a serious conversation with your client," and reminded him of the East End Drug Court's services.

Mr. Futterman was smiling as he left the courthouse with his attorney after posting bail. "We're very pleased that nobody was seriously hurt in this accident," Mr. Burke told members of the media. He said his client would be back in Southampton court on Monday, but that the felony case was likely headed to Suffolk County Criminal Court in Riverhead.

A driver picked Mr. Futterman up from court. Asked about the accident as he got into the backseat, he said, "They hit me. . . . Luckily, my air bag went off and I’m safe." Asked about the mother and child, he said, “I believe they are fine.”

A Reminder From PSEG About Digging
Petition to Speed Up Sand Replenishment in Montauk
Artistic Portraits of M.L.K. Up for Auction on Saturday
END_OF_DOCUMENT_TOKEN_TO_BE_REPLACED