Item of the week from the East Hampton Library Long Island Collection. 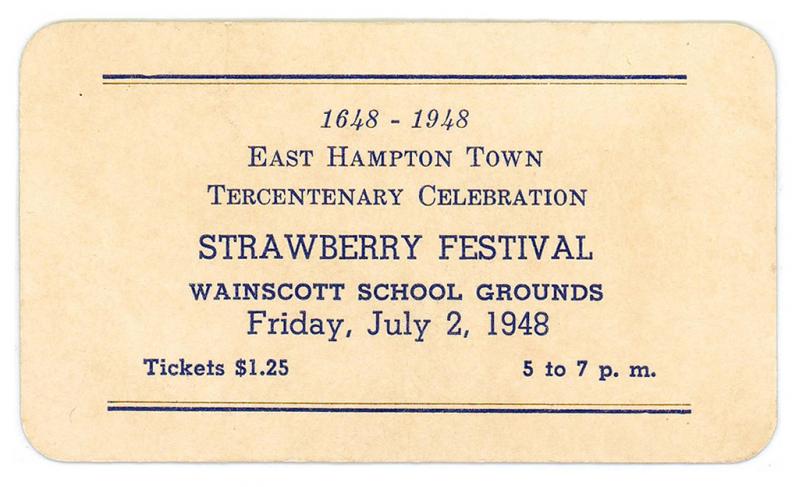 Strawberry festivals remained popular throughout the next century. Between 1885 and 1900, they were hosted by various organizations, including the Hook School’s students, the East Hampton Ladies’ Village Improvement Society, the East Hampton Methodist Episcopal Church, the Presbyterian Sewing Society, Amagansett Chapel, and Springs Chapel.

Typically, “hot shortbread” and fresh strawberries were served, with some events offering fresh cream and ice cream. Of course, strawberry festivals depended on the availability of homegrown strawberries, and often occurred within the same week, or even days.

The 1948 Wainscott Strawberry Festival was part of three weeks of celebrations, including a pageant and parade for the 300th anniversary of the settlement of East Hampton. Tickets to the July 2 Strawberry Festival cost $1.25 for adults and seventy-five cents for children.

Entertainment included John Morrison,  a bagpiper, and young Bobby Bubka, who played accordion for a Polish dance group.  Wainscott School’s grounds hosted the festival, but Raymond Osborn, the chairman, planned to use Wainscott Chapel in case it rained.

Strawberries were served with shortcake, whipped cream, and coffee by high school girls in peasant costumes and catering was organized by Isabell Osborn, Margaret Hedges, and Mrs. Philip Dickson.

The 1948 Festival sold over 500 tickets and despite warnings that advanced tickets were required, The East Hampton Star reported no one was turned away, even after tickets were sold out.