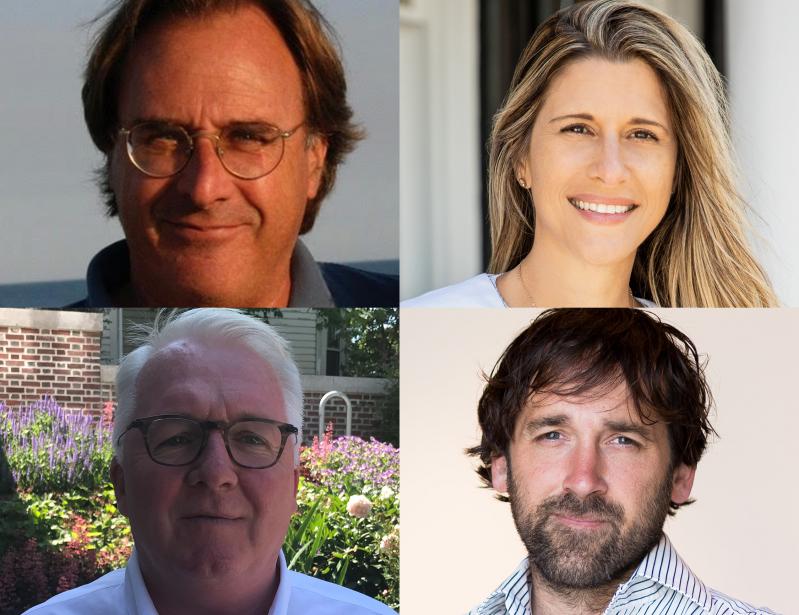 Four candidates are vying for two seats on the Sag Harbor Village Board Tuesday. Aidan Corish, an incumbent, is seeking a second term, while Robert Plumb, Jennifer Ponzini, and Silas Marder would be newcomers to the board. The candidates, except for Mr. Marder, who could not be reached, discussed their views on major issues facing the village, including protecting water quality, long-term planning, and improving the way the board interacts with residents.

Mr. Corish, who has been a Sag Harbor resident since 1995, was elected to the board in 2017. One of his assignments is overseeing the management of the sewage treatment plant, which “has given me an understanding of how fortunate Sag Harbor is to have one, and how well run it is,” he said.

The plant primarily serves the business district, but it has the capacity to double its intake, he said. Providing increased access to the sewer system would help protect water quality because it would reduce the use of outmoded septic systems that release nitrogen and bacteria into ground and surface water, he said. He is serving on a select committee that is examining how to extend the sewer system, and, since January 2018, he has been working on an initiative that provides regular monitoring of the water quality at village beaches.

Like many East End villages, Sag Harbor has insufficient parking, which is why, Mr. Corish said, he has been willing to touch the “third rail of Sag Harbor politics” and embrace charging for parking. He suggested the costs could vary based on proximity to Main Street.

He is against building a new parking lot, he said, and would like to employ technology to make the most of the existing infrastructure. The village, for instance, could use a smartphone app to inform residents about available spaces, he said.

Mr. Corish said the village would be well served by creating a new administrator position. With projects such as the rehabilitation of Long Wharf, the creation of the new Steinbeck Park at the edge of Sag Harbor Cove, and the expansion of the sewer system, the village needs someone to manage the day-to day issues that arise with development, he said. “We don’t have the bandwidth to do that properly,” said Mr. Corish, who believes the board should focus more on strategic, long-term planning.

Describing local government as “a participation sport,” he said he would like to see public hearings held at the beginning of board meetings so residents could fit them into their schedules more easily. He also suggested holding meetings on Friday afternoons, to allow second-home owners whose jobs prevent them from attending the current Tuesday evening meeting, to become more involved.

Ms. Ponzini, who has been living in Sag Harbor since 2010, is an attorney, a real estate broker with the Compass agency, and was a member of the village’s zoning board of appeals for five years. She has three children who attend Pierson High School.

Her real estate experience, she said, “covers all the issues in the village including rental laws, clear cutting, Long Wharf, and Steinbeck Park.”

Preserving the historical quality of the village would be one of her main priorities, she said, along with protecting water quality, updating the Local Waterfront Revitalization Program, and increasing public outreach.

Her time on the Z.B.A., she said, had made her well versed in the issues facing the members of the historical black neighborhoods of Sag Harbor Hills, Azurest, and Ninevah, commonly referred to as the SANS neighborhood. As a village board member, she would work to make sure the neighborhoods are preserved, she said.

Unlike Mr. Corish, she is not in favor of creating a village administrator position. “Why do we have to have another layer of management?” she asked. “There are other necessities, and the budget doesn’t allow for it.” Board members, she said, should be more hands-on in overseeing village projects.

In terms of public outreach, Ms. Ponzini said she would like to see the board hold more work sessions, particularly when addressing major issues facing the village.

“We did that during the gas station debate,” she said, referring to a 2013 application before the zoning board from the owners of the Harbor Heights service station, who had been seeking to open a convenience store there.

The village, she said, should also videotape board meetings so residents not in attendance can be informed about the topics being discussed.

As for protecting water quality, Ms. Ponzini said the current board had been “very proactive,” citing the water quality studies being done, and the enactment of a law that requires the installation of innovative septic systems for new residences, existing buildings that expand their floor area by 25 percent, and for nonresidential properties that require site plan review. “They’ve been doing a great job, and we need to keep it up,” she said.

Mr. Plumb, president of the Salt Construction Company, has lived in Sag Harbor for 40 years, and has been a member of the Z.B.A. for the past four.

He was motivated to run for the board, he said, because the Z.B.A., in an effort to protect the historic character of Sag Harbor, would often recommend zoning code changes to the village board, and nothing would be done. “The suggestions would go into a black hole and we never hear about them again,” he said.

The zoning code, he said, needs to be more strictly enforced. “Variances should be an exception, not the rule.”

To manage the development of the Sag Harbor Hills, Azurest, and Ninevah subdivisions, he said he would work with the residents to come up with guidelines.

He cited improving public discourse as a priority. The current administration, he said, has “curtailed public participation.” If he is elected to the board, he said, “I will speak up and try to open the government back up.”

He described the concept of creating a village administrator as “ill-defined,” but generally, he’s in favor of the idea. The additional salary cost, he said, would likely be offset by having someone focused full time on applying for grant money, and making sure the government is working efficiently.

His experience as a builder, he said, would be an asset as a board member, particularly with the large pending construction projects such as Steinbeck Park and the septic system expansion.

One project he would be against, he said, is building a new parking lot. The village, he said, should maximize the existing spaces. “During the fireworks, people always manage to find a spot,” he said, referring to the village’s annual Independence Day celebration. He half-heartedly lauded the board for the recent proposal to reduce the maximum parking time at eight spaces on Main Street to a half-hour, in order to increase turnover. “It’s a start, but where have you been?” he asked.

Protecting water quality and focusing on the issues at Havens beach would be another imperative for him, he said. At Havens, he said, “we need to identify the root causes of what’s going on and finally address them.”

Mr. Marder, a member of the family who owns Marders Nursery in Bridgehampton, has worked as a furniture designer and had been the owner of the former Silas Marder art gallery. After launching his campaign, he told The Sag Harbor Express that protecting the environment and water quality were his top priorities.

Voting will be from noon to 9 p.m. at the Sag Harbor firehouse on Brick Kiln Road.

In the village’s mayoral race, to be held Tuesday, Mayor Sandra Schroeder, who is seeking a third term, is running against Kathleen Mulcahy.