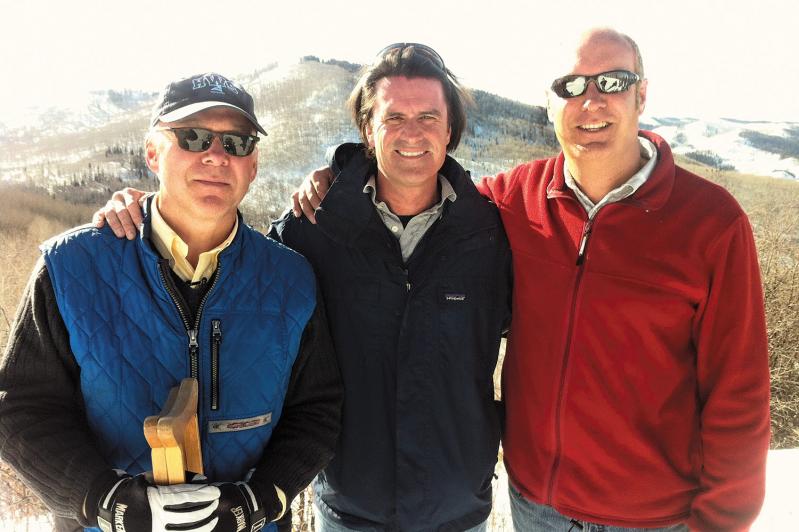 Mark Godfrey, John Breen, and Andy Godfrey revisited several sites tied to their childhood and the plane ride that led to a family tragedy.
By Jennifer Landes

The story of the Godfrey family explored in “3 Days, 2 Nights” is a natural for film or print. A tragic plane accident leaves two brothers — Andy, 8, and Mark, 11 — parentless and fighting for their lives on a stormy mountainside in Colorado, and they survive to tell the tale.

As compelling as that is, their history also involves a mega­star musician, a United States senator, and the origins of the Americans With Disabilities Act as the film underscores the strength derived from family, love, and faith, and the resilience of the human spirit. Yet it was almost a tale never told.

The documentary, whose final cut was completed just a few weeks ago, is a last-minute addition to the Hamptons International Film Festival. Its director, John Breen, is a full-time East Hamptoner and a friend of the brothers since childhood, when they were all growing up in Houston. Anne Chaisson, the festival’s executive director, said HIFF was thrilled to have it in time for Sunday night’s screening in Southampton (and an additional screening on Monday in East Hampton). Mr. Breen said he was grateful for the support.

Having married into a filmmaking family (his wife, Zoe Pennebaker, is a daughter of the documentarian D.A. Pennebaker, who died this year), Mr. Breen decided he could make a film about the brothers’ story if he had involvement from his in-laws. His wife’s brother, Jojo Pennebaker, became the director of photography, his wife’s stepmother, Chris Hegedus, is an associate producer, and he consulted with his father-in-law before and during the five-year plus filmmaking process.

Before this project, Mr. Breen had been a successful restaurateur in Washington, D.C. He sold his businesses in 2011. Although he grew up in Houston, his family was from the East Coast, and they spent summers in East Hampton during his childhood and after.

It took more than three decades for Mark and Andy Godfrey to come to terms with what happened to them on March 2, 1974, on the way from their home in Houston to a family ski vacation in Aspen. “They didn’t talk about it for years,” Mr. Breen said. Then, at Thanksgiving about 10 years ago, they had a drink after dinner and Andy asked his brother a question about the time they were waiting for help after the crash, during the three days and two nights of the title.

“For Andy it was a spiritual question: why this happened,” Mr. Breen said recently in The Star’s office. “He was finally getting comfortable going places he could not go before.” He began to think about a book and sent off a treatment to The Aspen Times. It was published in its Sunday magazine on March 7, 2012, and soon went viral.

According to Mr. Breen, Andy shared it with the hope that it would help and inspire others who had suffered trauma in their lives. But Mark, too, was at a turning point and was ready to revisit those moments that changed their lives forever.

The boys were the sole survivors of the crash and lost their older brother and sister as well. Mark also lost his legs from the hours he was pinned under the wreckage. Just after the crash, Mark returned to Houston for surgery, and Mr. Breen had a chance to ask him what really happened.

“He tried to speak, but he couldn’t. His eyes welled up in pain. I saw it in his eyes, I’ll never forget it,” Mr. Breen said. “He’s never used his handicap as an excuse. . . . I hoped I could get on the screen the way he’s inspired me and could inspire others.”

Early on he is shown starting his day by putting his prosthetics on and going about his very busy life. A promising athlete in his youth, he watches his daughter play lacrosse. He is also seen preparing for a trip from his home in Denver to see his brother in Aspen, gathering up old documents and clippings from the time of the crash to share with him.

Together they work to piece together what they recall from those days and begin a quest to the locations that have meaning to them or relate to the crash. They go to the crash site itself and to Houston to visit friends and their old house. They even travel to Scottsdale, Ariz., to see the person who was pivotal in their rescue. Interspersed are clips of old family footage, tape recordings, and interactions and interviews with their extended families today. There is a real immersion into their childhood and who they are now.

“3 Days, 2 Nights” is not only about their personal trauma, but also the historical pressures on men and boys to act a certain way that are finally shifting.

“Through this film, we tackled the idea of what masculinity means” and how those old ideas of “don’t talk about it, shut up” aren’t healthy, Mr. Breen said.

The story unfolds organically, and there are some surprises and reveals along the way, building to a very moving and satisfying conclusion. After seeing it for the first time, Mr. Breen said Mr. Pennebaker “commented that the film felt different and fresh,  like a hybrid between a documentary and narrative film. It was really nice for him to say.”

Mr. Breen recalled Mark saying that seeing the film is like “holding a mirror up to your own life” and that he has already received emails from people who had seen an earlier cut of the film at previous festivals. The viewers said they were moved by it and looked at their own lives in response to see what they could do better.

“Ultimately, it’s a film about goodness,” Mr. Breen said, “told in a simple story about life.”

The film will be screened at 8 p.m. on Sunday at the Southampton Arts Center and at 2 p.m. on Monday at East Hampton Cinema. A talk with Mr. Breen and the Godfreys will take place after Sunday's screening. Tickets are $15.