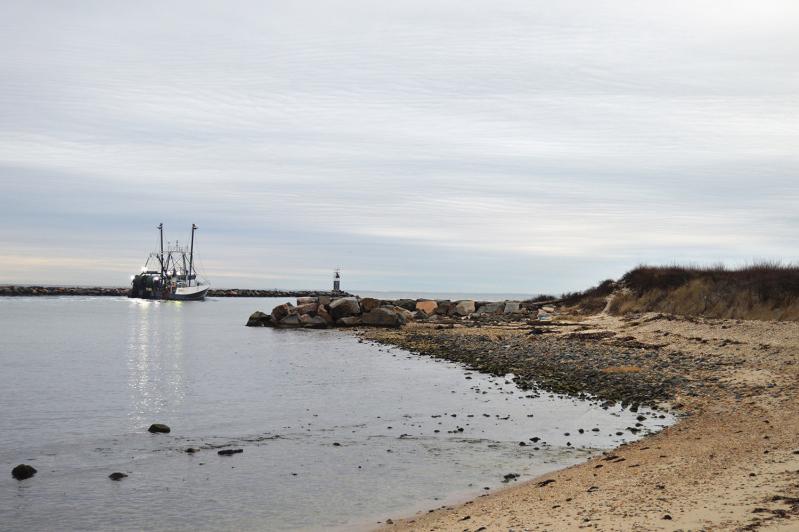 A lawyer for Inlet Seafood in Montauk is pressing the Town of East Hampton to shore up a sandy beach and a decrepit bulkhead in advance of a scheduled dredging of the Montauk Harbor inlet in October.
Tom Gogola
By Tom Gogola

It’s a cold and still January afternoon as the commercial fishing vessel Kimberly makes its way through the inlet at Lake Montauk, which is scheduled to be dredged in October, from 12 to 17 feet, by the Army Corps of Engineers. That’s great news for captains and crew alike, but there’s a catch.

The dredging, according to the Montauk attorney Andy Hammer, could make a bad situation worse at the bustling commercial-fishing boat basin attached to Inlet Seafood.

Mr. Hammer, addressing the East Hampton Town Board at its season-opening meeting earlier this month, said that the east side of the inlet, where the boat basin is located, includes a section of beach and rotting bulkhead that’s at the mercy of the wind and waves that rip through the inlet in bad weather.

Part of the area is town land, Mr. Hammer noted, and part is owned by Inlet Seafood and its associated boat basin, which he said is the largest commercial fishing dock in New York State. The boulder-hardened jetties that provide beach protection on both sides of the inlet extend to the south and into the lake, “but come to an abrupt halt at an unprotected area,” which is now a sandy beach with several memorial benches on it, along with a foam-flecked scatter of flotsam and jetsam.

The bulkhead, Mr. Hammer told the board, was likely built in the 1940s and has definitely seen better days. “Whenever it was constructed,” he told The Star this week, “it kind of became derelict.”

The inlet, Mr. Hammer said, faces “incredible storm surges and wave energy,” and deposits a lot of sand in front of the bulkhead. “Now the sand is being blown directly into the Inlet Seafood boat basin. There’s a large isthmus of sand ahead and in front of the bulkhead, right in the area where fishing vessels traverse. It makes it very hard for the commercial fishermen to get their boats in and out of there.”

Inlet Seafood performs licensed dredging of the basin annually, he said, but it “cannot keep up” with the volume of sand. Inlet did not dredge last year, which, said Mr. Hammer, was probably a good thing,  given that the sand that’s piled up along the inlet is keeping the bulkheading from collapsing. “It’s fortunate that we have this amount of deposition right now,” he said, but noted it was just a short-lived benefit.

The solution, he said, is to install new bulkheading, using leftover boulders from the recently completed revetment project at the Montauk Lighthouse. Some 570 tons remain on site, said the Montauk Historical Society’s lighthouse liaison, Greg Donohue.

Time is of the essence, said Mr. Hammer. There will be a “dramatic change” when the inlet is dredged to 17 feet, he predicted, while leaving unprotected shoreline along the inlet.

Its disposition isn’t the Army Corps of Engineers’ problem. “The Army Corps has a singular mission,” Mr. Hammer explained. “They don’t identify impacts from what they do, they just do the work — they don’t have the ability to introduce mitigative measures as they work.”

The bulkhead, he said, “needs to be replaced on town property, but not only that, it needs to be more robust.”

The Natural Resources Department would have to sign off on the necessary permit, and the State Department of Environmental Conservation would have to grant a tidal wetlands permit as well. (There may be other impediments, for example, protecting piping plovers or winter flounder.)

The Montauk attorney urged the town board to get on board with his proposed solution to shore up the southern end of the east jetty. The bulkheading effort is more than worth it, he said. “If we do this, the dredging will have much more sustainability over time.”