Bird conservancy had threatened to sue 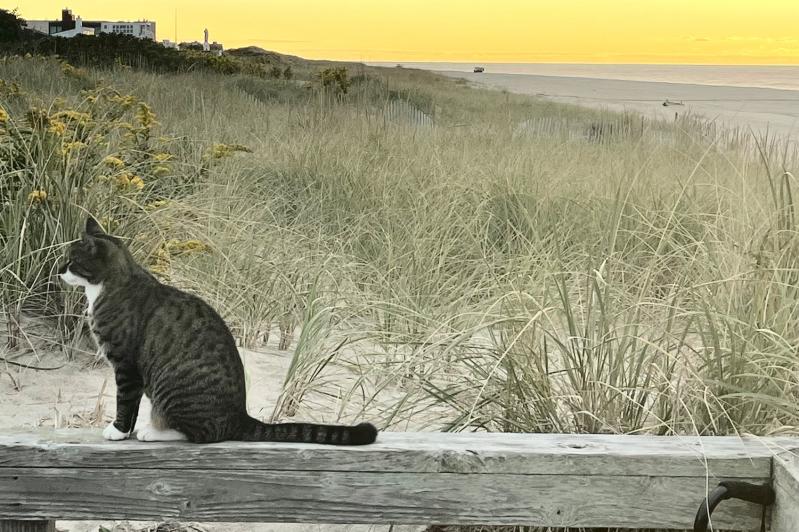 Nikki, a feral cat living at Sagg Main Beach, was recently captured and is available for adoption.
Jane Gill
By Christopher Gangemi

Last week housing for a feral cat colony living under the pavilion at Sagg Main Beach was dismantled and the colony was dispersed (minus two cats that have proven difficult to trap).

“The way it all started, I got a letter from John Rankin, the fire marshal for Southampton Town,” said Jane Gill, who had been working for years with a handful of people to look after the nine cats at the Sagaponack beach. “He accused me of feeding the cats, and said their housing and bedding were a fire hazard. Actually, it really started in the summer when I was told by Southampton Town Animal Control to get rid of the cats, because they were eating piping plovers.”

Someone had contacted the American Bird Conservancy with photos of cat prints in the sand near the plover colony, and the conservancy threatened to sue the town trustees for not doing enough to protect the plovers, which are considered endangered in New York State.

There have been cats at Sagg Main for 35 to 45 years, according to Ms. Gill. “People trap them and take them to ARF” — the Animal Rescue Fund of the Hamptons — “and they neuter and spay them, so the colony doesn’t grow.”

While there was no evidence of cats eating the plovers, the whiff of possibility and the threat of a lawsuit was enough for the town to shut down the colony.

“In 2016, we successfully sued the New York State Department of Conservation for allowing feral cat colonies within striking distance to plovers at Jones Beach,” said William Sheehan, chief counsel for the American Bird Conservancy. “The state attorney general got involved and was not happy, and fought us hard, but settled when it was clear they were going to lose. They agreed to round up the cats and post signs.”

“We definitely had a lot of contact from the American Bird Conservancy about their concerns with the feral cats,” said Ryan Murphy, head of code enforcement for Southampton Town. “That was a motivating factor, but not the only motivating factor. The houses were a fire hazard, posed other safety concerns, and the food is considered litter under town code.”

“My feeling is they’re scapegoating the cats because they didn’t protect the plovers like they should have,” said Ms. Gill. “The trustees give out permits for parties on the beach. No wonder they’re being threatened with lawsuits by the American Bird Conservancy. There were two weddings there this summer. Truckloads of tables and chairs and grills right next to the piping plovers, and dogs running wild on the beach.”

“It may be the town is violating its own regulations in many other ways,” Mr. Sheehan said about the dogs and parties. “Maybe we should turn to that next.”

Across the United States, according to the Humane Society, there are 166 million “community cats.” They have 1.4 litters a year and only 25 percent of their kittens are still alive after three months. Yet, for all their challenges, “Stray cats are the single largest source of shelter animal intake,” says the society’s website. Most don’t make it out alive; 80 percent of cats who enter a shelter die there.

Their competition, the dogs, have a better shelter survival rate, at 50 percent.

The Humane Society is interested in “community cat management” through trap, neuter, and release, or T.N.R., programs. It believes the strategy will mean fewer cats in shelters will ultimately get killed.

“I don’t think there’s ever been a documented success story for any T.N.R. colony in the country,” said Mr. Sheehan of the bird conservancy said. “I don’t think it’s ever eliminated a feral cat colony.”

ARF, through its Operation Cat boasts of having trapped, neutered, and released 35,000 feral cats “from Speonk to Montauk” since the program’s inception in 1997. According to its website, “Volunteer caretakers provide food, water, and shelter for over 1,000 cat colonies, ranging in size from two to 30 cats.”

Indeed, people like Ms. Gill who help feral cat colonies are part of a dedicated group. One woman in Springs said she spends close to $700 a month on food for 13 separate colonies and spends three hours a day completing her rounds. She’s been doing it for 25 years, but asked not to be named because she has been angrily confronted about caring for the cats.

She is not connected to the Sagg Main Beach colony.

“The only way we’re involved with cats is if they’re sick or injured,” said Anna Roan, an East Hampton Town animal control officer. “We’re colony friendly, I would say.”

When it comes to managing feral cat colonies, “A lot of what we’re doing is encouraging animal abandonment,” said Peter Marra, a biology professor at Georgetown University and author of “Cat Wars: The Devastating Consequences of a Cuddly Killer.” He says shelters encourage people to adopt pets when they shouldn’t. “People who can’t afford it, college students, and other transient populations, shouldn’t be adopting animals that can live 15 years.”

“The elderly woman feeding cats isn’t the problem. She doesn’t understand complex ecosystems,” Mr. Marra said. “She’s just a remarkably compassionate individual who is trying to do what she thinks is good. But the Humane Society and places that support T.N.R. should know better. Those organizations are ultimately the problem.”

“Cats are an invasive species. They occur in no natural habitat anywhere in the world. We know they’re one of the biggest threats facing birds,” said Mr. Marra. “They’ve caused the extinction of at least 40 species around the world. It’s a well-known fact that cats kill for fun and for food, and they’re not getting enough just from kibble. Even fed cats kill many animals during a day,” he said.

Apart from that he said, “Cats outside die miserable deaths. There are foxes, tires, and diseases. They live half the time of a cat that lives indoors. There’s nothing about a cat being outside that’s a good thing. Either someone has to create an enclosed sanctuary, or the other alternative is euthanasia. To me, we either watch the sixth mass extinction take place, or make the difficult choices about where we screwed up.”

Those who care for the feral cats would beg to differ. “I think abandoning an animal is terrible,” said the Springs woman who watches over 13 colonies. “All an animal wants to do is enjoy life, eat well, play, and be affectionate.”