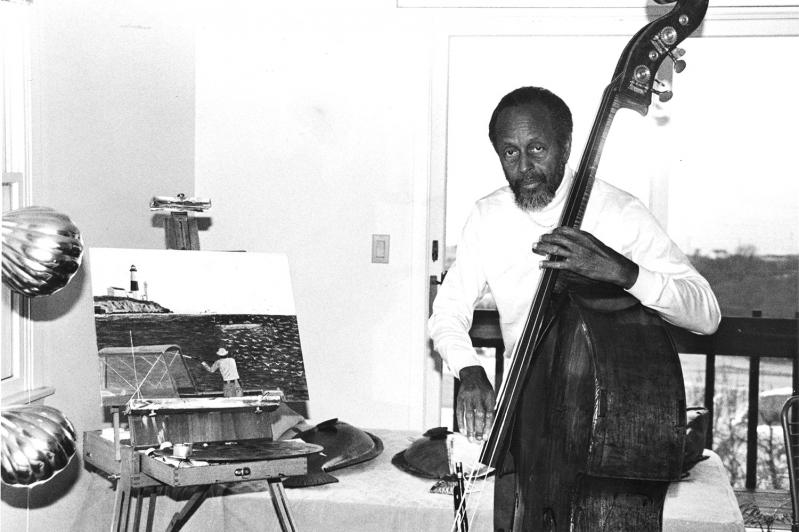 This December 1989 photo from The East Hampton Star’s archive depicts Percy Heath, bassist, artist, and sportfisherman. Born in 1923 in Wilmington, N.C., Heath went on to work with members of jazz royalty, including Miles Davis, Charlie Parker, and Thelonious Monk. Most notably, in 1952 Heath was one of the founding members of the Modern Jazz Quartet, a group widely credited with popularizing “cool” jazz. It was disbanded in the 1990s.

Heath grew up in Philadelphia, where his parents encouraged his musical talents from an early age. At 19, he enlisted in the Army Air Corps, becoming a member of the famed Tuskegee Airmen, though he never flew any combat missions. He reached the rank of second lieutenant before the end of World War II. He then enrolled at the Granoff School of Music in Philadelphia, where he studied bass. Shortly thereafter, he moved to New York City with his brother, and there the Modern Jazz Quartet was born.

Percy Heath first fell in love with the South Fork in 1953 and made Montauk his permanent home in the 1980s. There he pursued one of his other great passions, sportfishing. A plaque embedded in stone at Turtle Cove immortalizes his accomplishments as a surfcaster. He could often be seen going out on his beloved fishing boat, The Fiddler, to catch striped bass.

This photo shows that Heath was not only a talented musician, he was also a painter. The work seen here is a self-portrait aboard The Fiddler. He painted landscapes, too, including depictions of the sunset over Fort Pond Bay, and was one of the founders of the Montauk Artists Association.

Julia Tyson is a librarian and archivist in the East Hampton Library’s Long Island Collection.