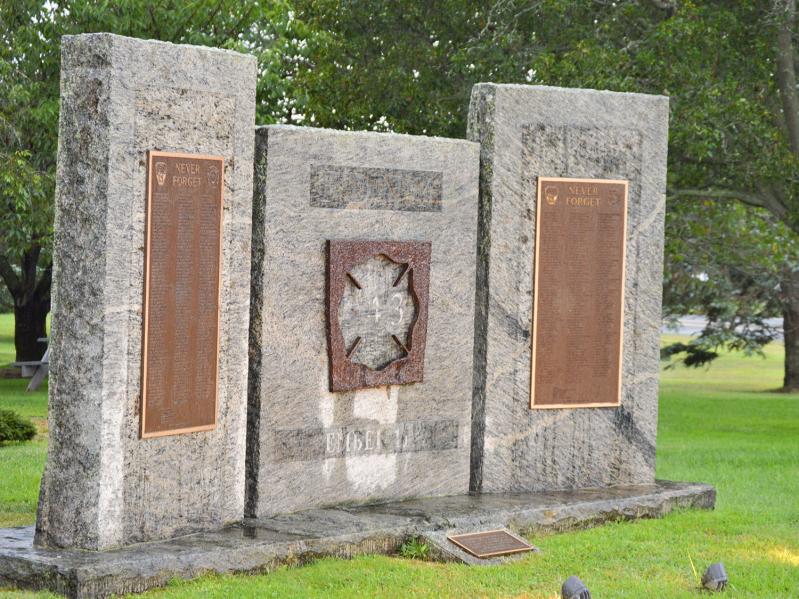 The 343 firefighters who died at the World Trade Center are honored at the Montauk Fire Department’s 9/11 memorial. Many others would make the healing journey east to escape the trauma of that day.
Tom Gogola
By Tom Gogola

The destruction of the World Trade Center on Sept. 11, 2001, was deeply felt in Montauk for many months after the attacks, as people sought to get away from the smoldering hellscape of Lower Manhattan and find some comfort and solace at sea.

Skip Rudolph, a Montauk charter boat captain, recalled this week that his charter on that day was a group of workers from Con Edison, the New York City utility, who were set to go tuna fishing on Captain Rudolph’s Adios. “I had that group of guys with me every year,” said Captain Rudolph, as he remembered the events of the morning that changed everything at the outset of the new millennium.

“It was pretty wild. Someone on the radio said a plane crashed — holy crap! — and when the second plane hit, I got on the radio and said, ‘There’s some kind of terrorist shit going on, that’s no accident.’ The next thing you know, they were halting all the flights and I remember looking up at the sky and seeing all these planes from Logan and Canada, you could see the contrails and the planes turning around, going back to where they came from. One of the Con Ed guys said something like, ‘There’s something going on in the city — what do you think we should do?’ “ The consensus view, said Captain Rudolph, was “maybe we ought to go fishing.”

He took the men offshore and the group had a successful day with the yellowfin and albacore tuna. When Captain Rudolph pulled the Adios into its slip at Salivar’s Dock that afternoon, he said the Con Ed workers very quickly left his boat, jumped into their cars and rushed into the Lower Manhattan recovery fray. For weeks after, he said, “people were coming out that were involved in some way on 9/11 — I had one guy, a businessman, young guy, he was in the World Trade Center and he had somebody who had jumped out of the building hit the ground six to eight feet from him — he was really affected by it. The noise it made. . . . Then he just ran for his life.”

The losses were felt close to home as well. Capt. Michael Potts of the now-retired Bluefin IV charter boat said that his neighbors had lost a son that day. Captain Potts was living in a condo at Montauk Downs and recalled the devastation that greeted the Scharf family, whose son John Scharf, a former Marine, died in the towers.

“The kids were young at the time, but they’ve grown up,” said Captain Potts, who is still in touch with one of the Scharf grandchildren. “When a trauma like that happens so early in your life and you weren’t there for it — you can’t get over it, I guess.”

For Capt. Mike Vegessi of the Lazybones party boat, the aftermath of 9/11 represented a fleeting moment of national unity wrought in catastrophe. Asked what came to mind from that time, Captain Vegessi said, “It’s a hard question but I remember a very strong sense of patriotism, everyone was so pro-America, sticking together. I remember a tight bond among all the first responders and I remember a lot of the grief, too,” said Mr. Vegessi. “I knew people in the towers, customers, people who were killed that day. There was a real strong sense of unity and bonding — not like it is now — where everybody just wanted to do the right thing.”

Mr. Vegessi further recalled how the post-9/11 moment of unity played out on the water as he reflected on a preponderance of “well-behaved fares, no bullshit,” on the Lazybones after the attacks.

The summer of 2002 illuminated and amplified the healing powers of Montauk in the wake of the attacks. One anecdote from that time stands out: A crew of men from the New York City Port Authority — which lost 84 people, including Port Authority Police, on 9/11 — were out on a bass trip on the old Marlin V one night that summer.

One of the Port Authority guys was visibly upset throughout the trip, crying occasionally into his work jumper. One of his co-workers sidled up to a mate at one point during the trip and told him that his friend had “a very bad 9/11” — he had seen friends die, bodies crash to the pavement. Throughout the evening, the group would burst out into song on regular intervals, usually between drifts, and belted out “I Am a Man of Constant Sorrow,” from the Coen brothers’ “O Brother, Where Art Thou?”

The men knew all the words by heart. The captain even managed to drill up a few striped bass before the night was out, which also cheered everyone up and sent them home with some fillets.

Captain Rudolph had a regular New York Fire Department charter from the 9/11 era, people who returned to fish with him every year. The N.Y.F.D. lost 343 men that day.

Captain Rudolph described Montauk and the East End generally as an oasis from post-9/11 trauma. “It gets a little crazy in the summertime and everything, but anyone who needs to get some scenery and stuff — you’ve got Napeague, Accabonac, Montauk, you can walk to the park, take the trails right down to Shagwong and right down the beach — there’s all kinds of birds in the woods, deer — it’s soothing and it’s just 125 miles away from the city. Going out on the water, well, you’re going fishing and you’re out there with the fresh air looking back at the land, and for someone who went through any kind of trauma like that, all that concrete — you’re in a safe space.”