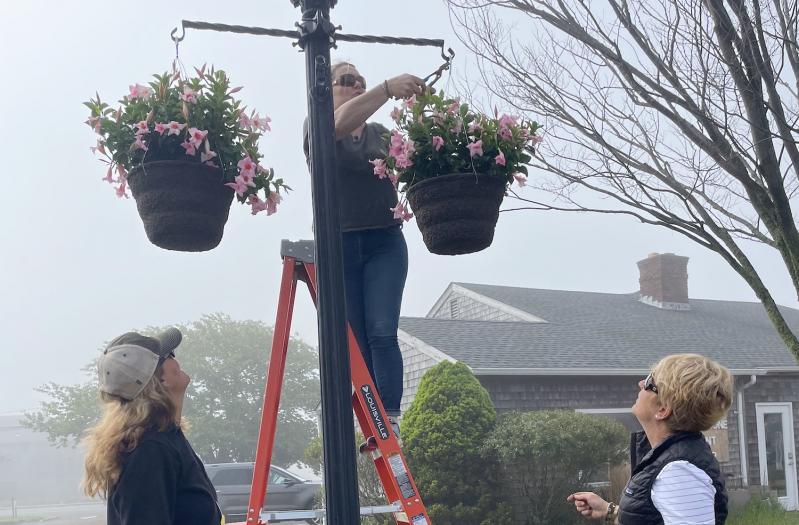 Adrienne DePasquale, Lisa Valcich, and Joanna Sepp, volunteers with the Montauk Village Association, filled and hung planters in the hamlet’s downtown on May 15.
Jane Bimson
By Tom Gogola

The Montauk Village Association faces an uncertain post-Covid future after the old guard nonprofit saw its fund-raising plummet during the pandemic. Formed in the hamlet in 1961 with a mission to beautify downtown Montauk, the M.V.A.’s beautification baton has been informally passed to the Town of East Hampton — and Councilman David Lys formalized the ad hoc arrangement now afoot.

But there’s work to be done. The M.V.A., whose board comprises largely women in the real estate business, is supportive of Mr. Lys’s efforts even as all parties highlight a disconnect in need of resolution: Who is responsible for what — and who owns what — when it comes to all those wooden flower boxes and memorial benches in downtown Montauk that have been the M.V.A.’s hallmark projects for decades?

“Nobody can really pinpoint or really say what the M.V.A. is really responsible for,” said the organization’s president, Theresa Eurell, a real estate agent. “And our frustration at the moment is that people who work for the town really don’t know what they’re supposed to be doing” when it comes to cutting the grass, removing weeds and other landscaping and hardscaping work historically taken on by M.V.A. volunteers because no one else was doing it.

In 2019, the M.V.A.’s fund-raising efforts yielded $27,543 — the following year, it raised nothing. The organization also budgets about $4,000 a year for local student scholarships.

“I don’t know what the future is going to bring for us,” said a former M.V.A. treasurer, Marge Harvey, a Montauk real estate agent. “We basically haven’t had a fund-raiser in the past few years. We were always involved with the beautification and also provided the scholarships to students, but the last couple of years we couldn’t raise the money we needed to pay the bills, so we had to rely on the town to come in and help us.”

The town sent $10,000 to the M.V.A in its past two budget cycles but Ms. Eurell said that’s a drop in the bucket compared to what’s needed — and deserved.

Montauk brings “in an enormous amount of tax dollars to the Town of East Hampton,” she said, and the beautification efforts deserve “more than $10,000 a year.”

Even as the M.V.A.’s fortunes flagged under the weight of Covid, Montauk was hitting a newfound stride as a go-to destination for well-funded fun seekers from out of town, for better or worse.

Hamlet business leaders, eager to recast Montauk’s historical posture as scruffy bastard child of the Hamptons, noticed that in the absence of the M.V.A.’s vigorous volunteer-driven landscaping efforts, weeds started to grow all over the place two summers ago.

“Montauk was looking kind of crappy,” said Jennifer Fowkes, executive director of the Montauk Chamber of Commerce, whose offices are downtown.

“The M.V.A. is the entity that traditionally took care of all these public spaces,” added Ms. Fowkes, who facilitated the town’s intervention, “even in the interim as we figured out who is doing what.”

Ms. Fowkes championed landscaping undertaken by East Hampton Town maintenance supervisor Anthony Littman and his crews, as she noted that it was her understanding that Mr. Lys “believed it was the town’s responsibility to continue the upkeep.”

He does. Mr. Lys characterized Montauk as “probably the town’s biggest hamlet with beautification needs.”

He’s trying to secure funding for a survey of downtown Montauk beautification assets — and recently proposed deploying a drone to count up all those planter boxes and memorial benches installed courtesy of the M.V.A. over the decades — to determine the scope and cost of work that would be undertaken by the town moving forward.

Mr. Lys said he hadn’t worked up any anticipated costs for the town to formally take on landscaping responsibilities in the heart of downtown Montauk’s business district. His plan in the making would offset costs to the town “with new charges for off-street parking” in Montauk.

Some areas where M.V.A. installed planters or benches have never been surveyed, Mr. Lys said as he described “a disconnect for who takes care of what in Montauk — to no fault of anyone. I’m trying to fix the disconnect.”

Moving forward with an expanded town maintenance and landscaping footprint in the hamlet, he said, would leave organizations like the M.V.A. to “add the ‘icing on top.’ “

Ms. Eurell thinks that’s a great idea. She would like to see the M.V.A. return to its original tasks: planting memorial trees, planting Montauk daisies in the flower boxes, installing memorial benches.

“That was always my understanding,” says Ms. Eurell, who has headed the M.V.A. for five years. “It was never for us to be cutting hedges around the memorial garden on the Montauk green.”

Ms. Eurell said she had also contacted the town over the past two years to get it to deal with weeds that have sprung up by the Tesla charging station and in the Post Office parking lot. “It’s so crazy that I have to call them after getting complaints from residents.”

Ms. Eurell further noted that the M.V.A.’s  traditional maintenance functions — preserving those railroad-tie flower planters and memorial benches — had reached a point of unsustainability. She is concerned about the potential for legal exposure to the town if something isn’t done about it.

An indeterminate number of the boxes installed by M.V.A. are on town property, she said, “and are completely rotten. We’re in no position to take them out and fix them, and they’re actually a hazard, a lawsuit potential.”

The hamlet is now also “overrun with memorial benches,” added Ms. Eurell, “and some of them are really old. We don’t have a crew to maintain them, and again — why is it left to us? Why does Montauk need volunteers to take care of its appearance? I find it hard to believe that the town doesn’t have the money to help.”

“I don’t know if this organization is even going to sustain itself or continue,” said Ms. Eurell. “That’s a decision the M.V.A. board needs to make, but we definitely don’t have the ability to raise $100,000 to take care of Montauk.”