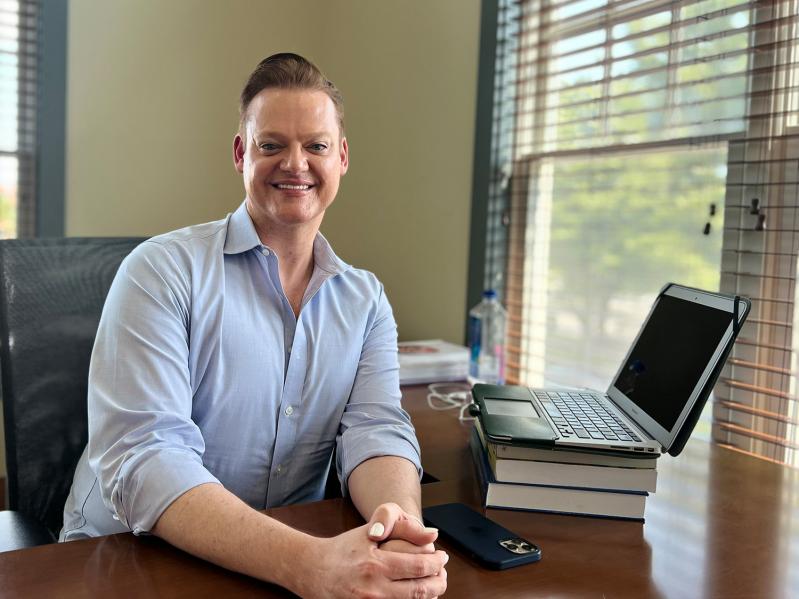 “The great thing about sex is that it’s all about options. There’s not one right way to have it. The skin is the largest sex organ and the brain is the powerhouse. There are so many parts on our bodies that can be touched that can be arousing,” said Lee Phillips, a psychotherapist, sex therapist, and substance abuse counselor with practices in New York City and Virginia, and now Water Mill. “And you can have fun with many parts of your body. Your hands are great. Your mouth is great. There’s a lot you can do.”

New to the Hamptons, after falling in love with the area during his first visit over Memorial Day, Dr. Phillips spoke about his expanding practice earlier this month, while seated in his recently-leased workplace that looked more like a defunct law practice than a sex therapist’s office. That will change, he promised.

“There will be fabulous artwork in here. These [ceiling] lights will be gone. I’ll have lamps, a beautiful couch, and beautiful paintings. My goal is to actually open my own sex therapy institute here, where I will train and supervise people to become sex therapists,” explained Dr. Phillips, who said he identifies as queer.

His Water Mill practice is already open for business, offering help for those suffering with issues such as chronic illness, chronic pain, and disabilities, which can lead to depression, anxiety, stress, and an uncertainty of how to navigate through the emotional and physical trauma of a serious illness.

“I can help those people with the process of reclaiming their sexuality and looking at what’s possible for them now, instead of focusing only on what they could do in the past when they were healthy individuals,” he said. “Psychotherapy has become one of the leading treatments for chronic pain because the brain and body are so connected. So, if patients can regulate their nervous system through a process of psychotherapy and somatic therapy, where we look at the body and what’s going on in the body, that can really help someone become more sexual. Because when we’re relaxed in our bodies we can enjoy pleasure. That’s just one form of sex therapy that I do.”

Dr. Phillips stressed that his is a shame-free, nonjudgmental place for anyone to come in and explore whatever they need to work through, sexual or psychological. As such, his clients include those facing sexual challenges, such as low libido, low arousal, and a lack of desire. He sees patients with erectile challenges, premature or delayed ejaculation; women who experience painful intercourse or suffer from vaginismus, an uncontrollable tightening of the vaginal muscles during penetration. He also helps married couples recover from infidelity, polyamorous couples, and L.G.B.T.Q.I.A.+ folks who might be struggling with their sexuality and gender issues.

In a society that’s still predominantly heteronormative, where kinks and fetishes are not openly discussed, Dr. Phillips wants to normalize kinky sex, S-and-M, and any kind of fetish. “A lot of times fetishes don’t go away. And, anyway, we get turned on by them,” he said, smiling.

He also works with people who are non-monogamous who need help opening up their relationship to others. “They often come to me and say, ‘We’ve been together for 30 years and we enjoy each other, but we want to have more adventure in our love life and our sex life.’ And so they may want to step out of the boundaries of their marriage and be with other people or invite other people in. Whatever it is that they need, or if they’re having ambivalence about it, or sometimes one partner really wants it and the other isn’t sure, I help them navigate through it all.”

And, yes, he even works with garden variety cisgender, heterosexual, monogamous types. “I see many monogamous couples who love each other but who want to spice up their sex life or have more fun with each other.”

Originally from Chesapeake, Va., he moved to New York City at age 18, to attend Marymount Manhattan College and pursue a career as an actor and a dancer. When that did not materialize, he returned to Virginia, transferred to Old Dominion University and later attended Norfolk State University for a master’s degree in social work. He then worked in community mental health for 10 years as a geriatric psychotherapist.

“That’s what led me to working with chronic pain because a lot of my clients coming in were aging and they were in a lot of pain,” he said. “Then I started seeing young people with chronic illnesses and so I decided to get my doctorate degree at Grand Canyon University in Arizona, which is actually a small private Christian college. But I always wanted to come back to New York, so I returned 21 years later.”

Dr. Phillips said that one of his greatest rewards of being a sex therapist is offering a sex-positive lens. There has never before been more varied discussions of not just sex, but everything that goes with it: gender, identity, relationships, love. Yet this has not necessarily translated into less shame — or even more open communication. And that’s what he hopes to change.

“We deserve pleasure. Pleasure is our birthright. And it’s great to experience who you are as a person and as a sexual being without being shamed,” he said, adding that he also works with people who have been raised in strict Catholic or Mormon families and who struggle with feelings of shame.

“Religion can do that and shame is really hard to work through. I often say that shame should be a diagnosis in itself because it covers us everywhere, from head to toe. And it shows up like a trauma. And the way that we cope with shame is through self-compassion, knowing your self-worth and really just talking about it. That’s what therapy is. It’s processing, talking, and really giving people a safe space, and to listen to them. I think if you listen to patients, they’ll come back and see you.”