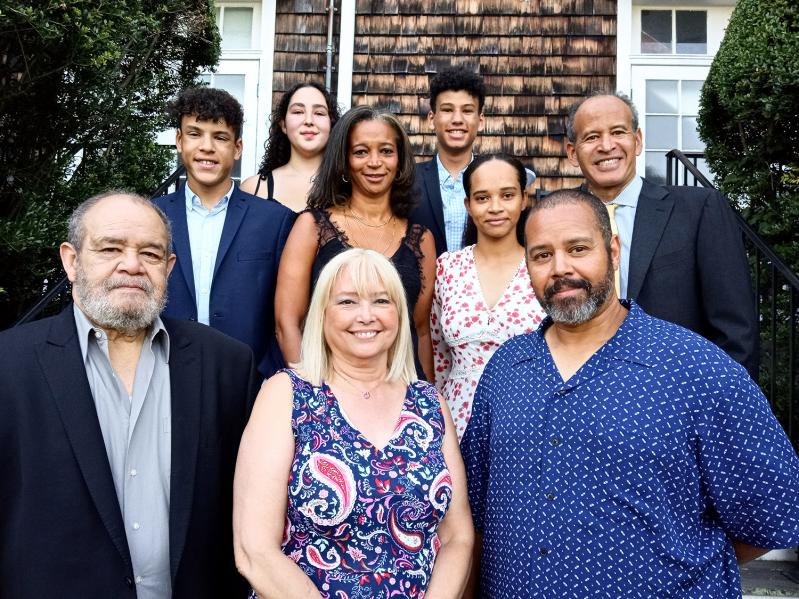 “It was Black gold and soul all in one place,” said Suzan Johnson-Cook, one of several honorees at a Saturday gala at the Bridgehampton Community House to celebrate 75 years of Azurest, a historically Black resort community in Sag Harbor.

Ms. Johnson-Cook’s sentiments were echoed by a cross section of attendees and highlighted the rich and resonant history of Azurest, one of three communities that comprise the so-called “SANS” enclave of around 300 homes that also includes Sag Harbor Hills and Ninevah Beach, which were developed soon after Azurest.

The community was established in the years following the end of World War II when Maude Terry, a schoolteacher from Brooklyn, was walking along a path created by South Fork Indigenous people in 1947, and noticed a large tract of land for sale. Ms. Terry approached the property owners, Elsie and Daniel Gale, who were white, and inquired about the property.

It was an era of legalized segregation and lynchings, an era when African-Americans who, after fighting fascism overseas, returned to a country deep in the hateful throes of Jim Crow. For Long Island African-Americans, there was also the continuing sting of living in a region that had fielded the largest northern organization of the Ku Klux Klan through the 1920s — funded, in large measure, by real estate interests.

In many places, Black people couldn’t enjoy beaches or pools or other vacation pleasures, and, as the late Montauk resident and jazz titan Percy Heath once observed, parts of the East End lived under the “golden rule” when it came to Black people, into the 1970s — you could rent your home to a Black person, but you couldn’t sell it to them.

The 1940s was also a bygone era of non-private, “party line” phones, said Steven Williams, president of the Azurest Property Owners Association. You never knew who was listening in, so Ms. Terry got the word out about the land available for building via regular mail and word-of-mouth among Black professionals, many of whom had attended historically Black colleges and universities.

“Obviously there was lots of resistance” to what Mr. Williams called a “radical” gesture on the part of the Gales to at first sell a 20-acre parcel and then the full 60 acres. The development was transformative both for those who built and bought homes there — at first, a cross section of doctors, lawyers, artists and other professionals, and later, firemen and police — and also for the village of Sag Harbor itself.

“One thing that happened in the village after World War II,” Mr. Williams added, “was that a lot of guys who’d been cloistered in this community, these veterans had been to France and Italy, they’d seen the world” — and had their eyes opened to different cultures. The new Black enclave would provide a big boost to the local economy, as hardware stories, appliance stores, liquor stores, butchers, and other businesses took root and flourished.

The Azurest community, he added, was founded on some basic principles that highlighted ethical living, and strong families, as he described how Elsie Gale and Maude Terry “self-identified as contrary to the pervasive stereotypes of the time.”

Mr. Williams said Azurest has persevered and thriven thanks to a sense of ownership and pride — and that people pay their taxes and their mortgages, said Mr. Williams with a slight chuckle.

He added that numerous Black resort communities were established on the Eastern Seaboard after Azurest, but over time, a lot of those fell into disarray — which only highlighted, he said, the staying power of the local enclave.

Indeed, Mr. Williams recollected an attempt seven years ago by a developer to buy Azurest and transition it from a community of casual, cozy cottages into a Hamptons spread of megamansions for mostly rich white people. That developer made some inroads, Mr. Williams noted, but thanks to the resilience of the community, Azurest managed to weather the development storm. (The community is trying to get a zoning overlay from Sag Harbor to protect its historical character in perpetuity.)

The event last Saturday featured a cross section of prominent East Hampton residents, including the sculptor Cheryl R. Riley, who said she and her wife have “so many friends in Sag Harbor” and that Azurest served a great function in not just getting people out of the city but to a place where  “children can be exposed to people who have accomplished a lot.” Those include Ms. Johnson-Cook, an ambassador during the Barack Obama presidency, and the novelist Colson Whitehead, who was also honored at the event.

Meanwhile, East End Suffolk County legislator and congressional candidate Bridget Fleming greeted Mr. Williams with a big hello on the steps of the community center and later said that Azurest “represents a model for all of us — how to carry on and maintain community with this sense of tenacity and sticking to the values that are important to the world at large: kindness, community — those things are harder and harder to come by.”

Also in attendance was Stanley C. Gale, grandson of Elsie and Daniel, who joyfully recounted how “Maude got my grandfather on the phone, and he could immediately see that this could be a wonderful place for her and others to move to.”

Ms. Terry would eventually orchestrate the sale of all 60 acres owned by the Gales, “and my grandfather got some tough words about it from the neighbors,” said Mr. Gale, C.E.O. of Gale International, a prominent real estate development company. “He didn’t care.”

Many of Ms. Terry’s relatives were also present and represented five generations of the family, including Maude Terry’s great-grandson Shannon Terry Richards, who described Azurest as a place for “family, fun, love, and safety,” as he spoke of a community where even today, neighbors are considered extended family. “There was always a mom around who had mom powers when you did wrong,” he said with a laugh..