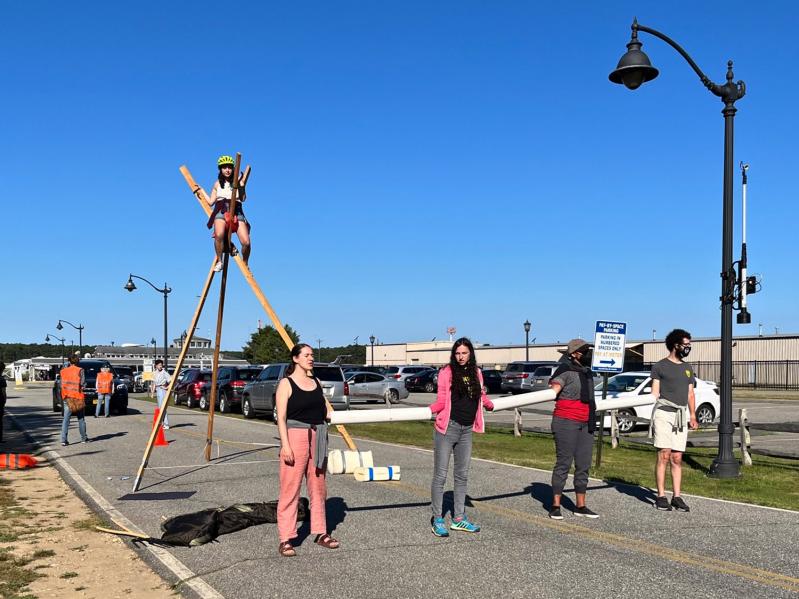 The activist group New York Communities for Change on Monday blockaded the entrance to East Hampton Airport as part of a Tax the Rich protest.
Christine Sampson
By Christine Sampson

New York Communities for Change got its message across, a member of the Brooklyn-based group of activists said Tuesday, with multiple demonstrations on the South Fork between Friday and Monday.

They were protesting what they say is the role of the very wealthy — the “1 percent” — in perpetuating climate change, housing unaffordability, income inequality, and the destruction of native lands.

Alice Hu, a climate campaigner, said the group has had a tremendous response, as it had hoped. “We had people saying keep it up, you’re amazing, keep doing more,” she said. “The dynamics are such that since we’re from out of town coming in here, we might be perceived as interrupting or disrupting, but people agree with us, and it kind of validates what we’re doing.”

Police in East Hampton Village, Southampton Village, and East Hampton Town made 16 arrests over the four days; at least one person was arrested twice, Ms. Hu said. They face charges of disorderly conduct, a violation, levied in this case for obstructing either vehicular or pedestrian traffic.

Among the six people arrested in the town on Monday was a woman who had been sitting on top of a tall makeshift tripod that was part of an hourlong blockade at the entrance to the airport, on Daniel’s Hole Road. In front of her, a few people stood with their arms linked inside what appeared to be PVC pipe, while in front of them, another dozen protesters stood with signs. “Tax the Rich,” one read. “Abolish billionaires,” said another.

East Hampton Town police called in a cherry-picker truck to coax the woman down from the tripod. A female officer helped her into its bucket. When they were safely on the ground, officers handcuffed her and took her into custody. They also confiscated some signs and pieces of PVC pipe.

Protesters called for Gov. Kathy Hochul to “put people over profit.” One man brandished a pitchfork. Someone with a megaphone decried “the one percent that is disproportionately responsible” for climate and housing crises, and native-land desecration. “We cannot have a fair society with those levels of inequality,” the unidentified speaker proclaimed.

As the protest continued, traffic backed up on Daniel’s Hole Road. Police officers and airport employees directed drivers to an alternate airport access the road. At one point, several children and adults pulling wheeled luggage were able to pass through. One helicopter landed, and at least one jet took off, even as the 20 or so protesters maintained their positions.

On Sunday, another 20, some with signs and a couple with musical instruments, arrived in East Hampton Village shortly after 11 a.m. Village Police Chief Michael Tracey said six of them were arrested after blocking Main Street and Newtown Lane and refusing to move. The protest was otherwise without incident.

The chief said the protesters were there for about an hour and a half, “and so were we.” He thanked his neighboring police departments, as well as the New York State police, for their assistance.

During a similar protest in Southampton Village on Friday, four people were arrested, including a member of the Shinnecock Nation.

In an announcement distributed to the media ahead of time, New York Communities for Change said the goal was to “protest on behalf of a fair tax system, environmental justice, and native land protections.”

“As the income gap widens and climate change continues to threaten our existence, no one should stand by and allow the richest New Yorkers to escape their due diligence,” they stated. “It’s time to tax the rich, build green housing for all, and fight to protect our native land — and since we won’t rest until we get [it] done, the billionaires in the Hamptons shouldn’t rest, either.”

Police said the protests were peaceful and mostly without incident, and Ms. Hu said Tuesday that the police on the whole acted fairly. Those who were arrested, she said, will receive legal support and financial assistance from the organization.