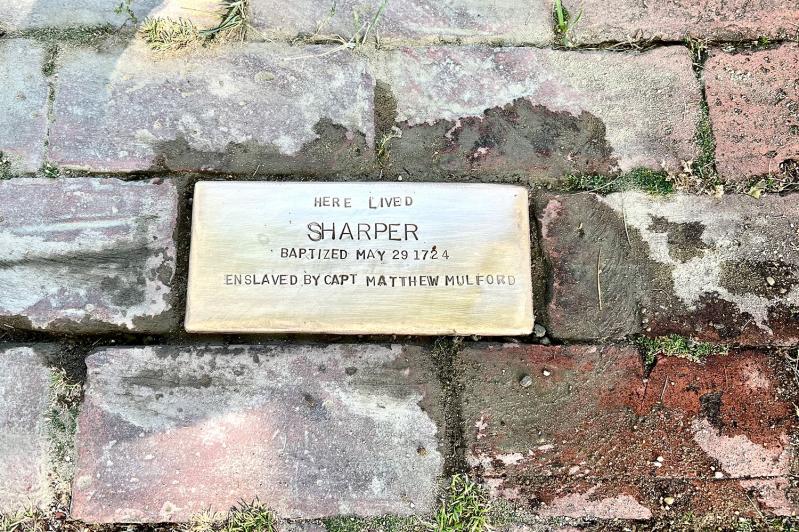 This year, June 19 will be the first time Juneteenth is observed in East Hampton. Marking the date in 1865 when the last enslaved people in Texas, the last state of the Confederacy with institutional slavery, were freed, President Biden signed the Juneteenth National Independence Day Act into law last year, officially designating June 19 as a federal holiday.

The East End will commemorate Juneteenth with various events in the area.

On Tuesday, the Guild Hall Teen Arts Council in partnership with the Plain Sight Project set two metal markers into East Hampton village sidewalks. The first, a bronze brick placed into the public walkway outside Mulford Farm, bears the name Sharper, who was enslaved by Matthew Mulford in the 1700s. The second was placed outside the East Hampton Library, engraved with the name Gene, a baby who died before she turned 2, and whose family had been enslaved by the Rev. Samuel Buell, who lived nearby.

There are a total of five markers of enslavement, and the remaining three will be inlaid in East Hampton during the next week. The markers were created by the 21 students in the Guild Hall Teen Arts Council, who worked for the last two months with J.J. Veronis, a metalworker and guest artist, and the founders of the Plain Sight Project, Donnamarie Barnes and David E. Rattray.

According to Guild Hall’s Anthony Madonna, a senior associate for learning and public engagement, the work greatly influenced their Teen Zine publication (published today by The Star). It also “brought this history of the enslaved and the enslavers in our area, to light,” he said, and added that learning this history has really affected the teenagers, who have started to question the Hamptons and the relationships residents have with the area.

The conversation on East Hampton’s slave-owning legacy will continue this evening at 6, at the Jewish Center of the Hamptons, where Ms. Barnes and Mr. Rattray will be joined by the Rev. Walter Silva Thompson Jr. of the Calvary Baptist Church in East Hampton. Moderated by Rabbi Josh Franklin, the panelists will share their research and individual

stories of enslaved and free Blacks on the East End of Long Island.

On Saturday from 10 a.m. to 4 p.m. in Agawam Park, Southampton Village, there will be a celebration of freedom, with the community’s third annual Juneteenth event.

“The community really came together and planned the event,” said Carmen Cohen, a member of an organizing committee that’s led by Denise Smith Meacham. According to Ms. Cohen, there will be a host of different live performances and vendors of locally made products, including Native American crafts as well as clothing, essential oils, and teas, to name a few. In addition, there will be an awards ceremony to honor certain members of the community. The event is free and open to all.

“We want all to come and have fun!” said Ms. Cohen.

The Southampton African American Museum will celebrate Juneteenth and its second anniversary with events on Friday and Saturday that are covered elsewhere in The Star.

On Saturday at 10 a.m., there will a Juneteenth commemoration at the Lt. Lee A. Hayes Youth Park in Amagansett. Renamed last year in honor of the Tuskegee Airman, who lived in the town for most of his life, the ceremony will feature an unveiling of a plaque dedicating the park to Mr. Hayes, as well as an informational kiosk. Mr. Hayes, who died in 2013 at the age of 91, would have turned 100 on June 20.

The Hayes family has organized a family Walk in the Path of an American Hero from the Amagansett American Legion Post to the Lee A. Hayes Youth Park prior to the program. Members of the Tuskegee Airmen Motorcycle Club will participate.

East Hampton Village has organized its first Juneteenth Celebration, Sunday from 2 to 4 p.m. in Herrick Park.

The keynote speaker will be Lewis Brogdon, an associate professor and director of the Institute for Black Church Studies at Baptist Seminary of Louisville, Ky. Other speakers include the Rev. Dr. Walter S. Thompson Jr. of Calvary Baptist Church in East Hampton; Artherine Dunne, chairwoman of the English Department at East Hampton High School; Hugh King, the director of the Home, Sweet Home Museum and town and village historian, and representatives of the Plain Sight Project. Inga Williams and Dorothy Jackson will be featured singers at the celebration.