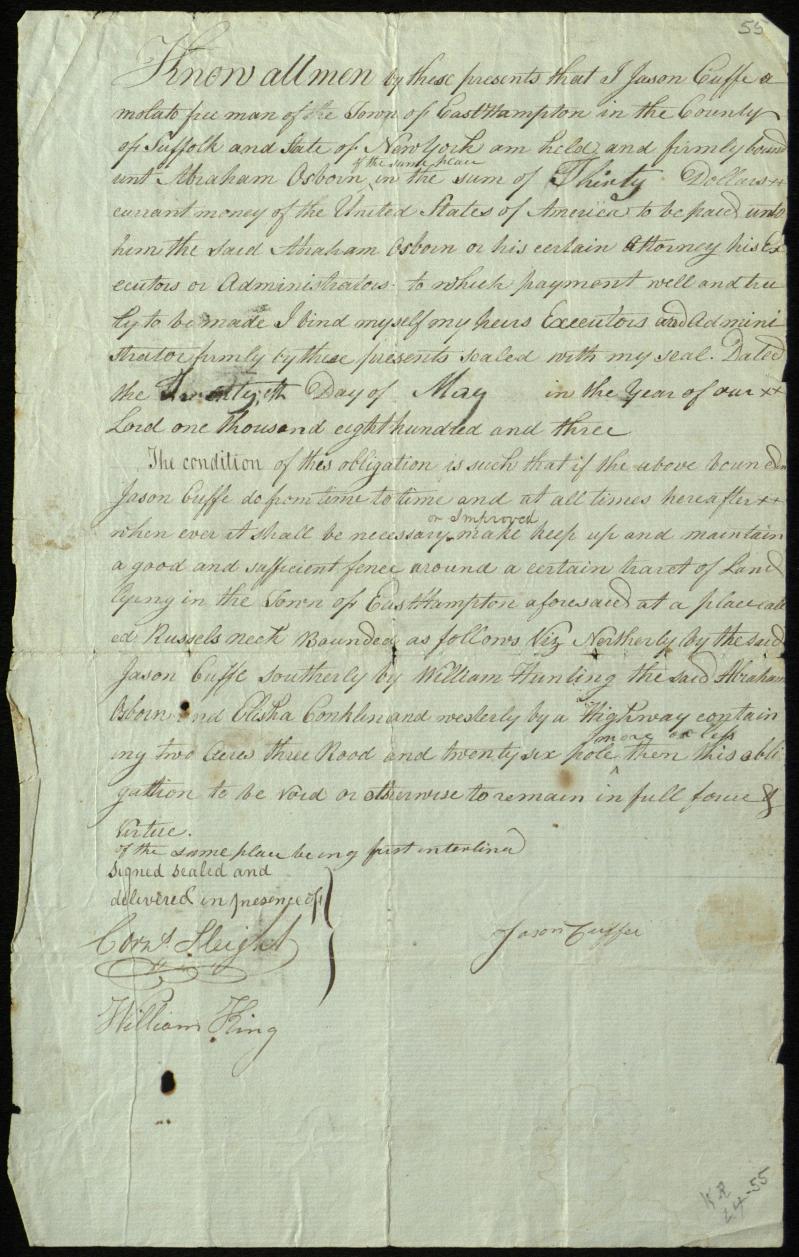 On Monday, Donnamarie Barnes and Rachel Lucas-Beruan's "See Their Names: The Lives and Stories of the Enslaved and Free People of Color of Shelter Island" comes to the Long Island Collection. Many of those featured in this Zoom program, like Matilda, a woman enslaved until 1795, are documented in the collection, and the presenters plan to expand their program to include information about both enslaved and free people of color in East Hampton.

Ms. Barnes, a Sylvester Manor curator and archivist, and Ms. Lucas-Beruan, formerly with the Shelter Island Historical Society, use the term "people of color" to include the stories of people with African and Indigenous heritage, regardless of whether they were enslaved at the time they appear in records.

In honor of "See Their Names," this week's item features an agreement from May 20, 1803, between Jason Cuffee, who is identified as a "molato," or person of mixed heritage, and Abraham Osborn, both East Hampton residents. The Cuffee family played a prominent role in the Native and African-American communities in East Hampton's history, with strong ties to Sag Harbor and Shelter Island.

This document, an excellent example of the stories buried in the archives, recorded an arrangement in which Osborn agreed to pay Cuffee to "keep up and maintain a good and sufficient fence around" a parcel of property Osborn owned in an area known as Russell's Neck, now called Barcelona Neck, near where Northwest, East Hampton, meets Sag Harbor. Osborn's property is described as neighboring those of Elisha Conklin, William Huntting, and Jason Cuffee, with Six Pole Highway mentioned as a boundary marker.

"See Their Names," which starts at 5:30 p.m., offers a chance to learn more about records in which people like the Cuffees are included. It is free, but advance registration is required with eventbrite.com.

Free Car Seat Checks in Southampton
Battle of the Books, and More Fun for Teens
This Week's Happenings in Montauk
END_OF_DOCUMENT_TOKEN_TO_BE_REPLACED