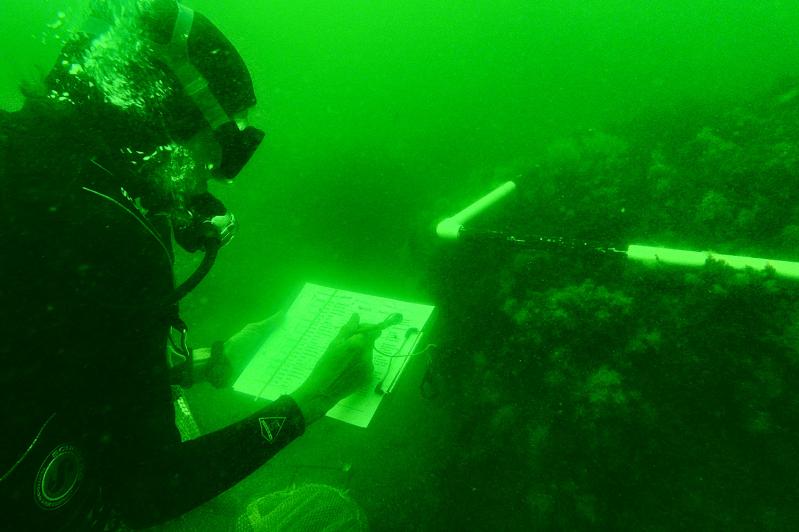 The waters surrounding Plum Island are teeming with abundant life, not unlike the Long Island Sound, Peconic Estuary, and other nearby waterways. But a series of scientific dives below the surface last summer revealed something that sets Plum Island's marine environment apart from the rest.

"There wasn't any trash," said Dr. Matthew Schlesinger, chief zoologist with the New York Natural Heritage Program, which completed the survey along with InnerSpace Scientific Diving. "That's rare for Long Island, to have an underwater ecosystem where you're not finding direct evidence of humans either being there or dropping something nearby."

The scientist-divers cataloged 126 species of plants and animals, according to a report released on Friday. There were no species of cans, bottles, or plastics; they didn't even see fishing line. Among the living organisms, both native and nonnative, were sponges; various algae and fish species, anemones and sea stars; herbivorous, filter-feeding, and predatory snails; mussels and other bivalves, and harbor seals and gray seals (two of the latter were thought to have taken a mesh sampling bag belonging to the divers, which was later recovered). There were comb jellies and even corals — yes, coral reefs, which most people associate with tropical destinations.

These are "the kinds of things you expect a nature documentary crew could uncover, or you see if you're snorkeling in the tropics," Dr. Schlesinger said. "We have a thriving underwater ecosystem right offshore of Plum Island that in my mind deserves some more conservation attention."

Which was exactly the goal of the study.

Louise Harrison, the New York natural areas coordinator for Save the Sound, whose donors paid for the research, said that the findings will buoy ongoing efforts to preserve the 822-acre Plum Island and save it from extensive development.

This research "can especially show the world that it's in great shape, is worth more study, is worth celebrating, and, like all ecosystems, is worth stewardship. Protecting something in such good shape draws you toward a possibility," Ms. Harrison said.
Save the Sound is one of 122 local, regional, and national organizations pushing to save the island from more extensive development. Once slated to be auctioned off to the highest bidder, Plum Island has been the focus of conservation efforts for many years. Ms. Harrison's hope is that President Biden will declare it a national marine monument, as he has the power to do under the Antiquities Act of 1906. (She would also accept "wildlife refuge" as an appropriate designation.)

"We're looking for a public-private partnership," she said. "A donor has come forward who is willing to establish security and stewardship. . . . We're trying to put all the pieces in place to make this happen. It's a very exciting time."

The animal disease research center that has been on the island for almost 70 years will still be decommissioned and its biodefense operations moved to a new facility in Kansas, but in 2020, federal lawmakers passed a bill taking it off the auction block. Plum Island is the most populous seal haul-out site in New York State and is home to hundreds of species of plants, birds, and other wildlife, including some that are endangered or threatened. In addition to the research facility, it is home to a historic lighthouse, built in 1869, and the Fort Terry army barracks, which dates to 1897. Plum Gut, the turbulent waters between the island and Orient Point, has been deemed a "significant coastal fish and wildlife habitat" by New York State.

At least one human artifact has, however, washed up on the island's shores. About seven years ago, a security guard on routine patrol found a glass bottle containing a note written by students from East Hampton's John M. Marshall Elementary School. Those students were invited to take the field trip of a lifetime — a tour of the island.

A similar dive-based study completed in 2019 was smaller in scale, but it still piqued scientists' and preservationists' interests. In the August 2021 study, a team of scientists, including Meaghan McCormack, the lead diver for the New York Natural Heritage Program, Steve Resler, Dan Marelli, David Winkler, and Janet Klemm with InnerSpace Scientific Diving, completed 26 underwater excursions over five days.

"I always have high expectations, but it was really successful," Dr. Schlesinger said, in informing a management plan for the island. "My program is built on the idea that you can't know how to protect something unless you know what is there. . . . Even if it stays in public ownership, as it is expected to do at this point, there will still be human use, probably recreation and scientific research, and we wanted to make sure we're not having impacts on the most sensitive places."

On their dives, the scientists used a one-square-meter measuring tool made out of PVC pipe, called a quadrat. With this tool, they would count the number of different species, and those species' abundance, within that square meter, before moving on to adjacent areas. There were three sampling depths: 10, 20, and 30 feet below the surface. In addition to live organisms, the divers also found glacial boulders, some as wide as 25 feet, that provided an anchor for many of the species.

"These organisms are our neighbors. They're part of our life here on the East End, whether we acknowledge them or not," Ms. Harrison said. "Living on the East End, people may be more connected with the idea of being a part of an ecosystem — at least, I hope so. Being surrounded by the waterways, people interact with the water, but there's always that mystery about it. To find this incredible richness around this small island, only about 100 miles off of New York City — to me, that juxtaposition is just so fabulous"

"If we get to our goal of preserving Plum Island, it will need to be protected and managed into the future, and the underwater parts will need attention as well. This will help inform that future work."