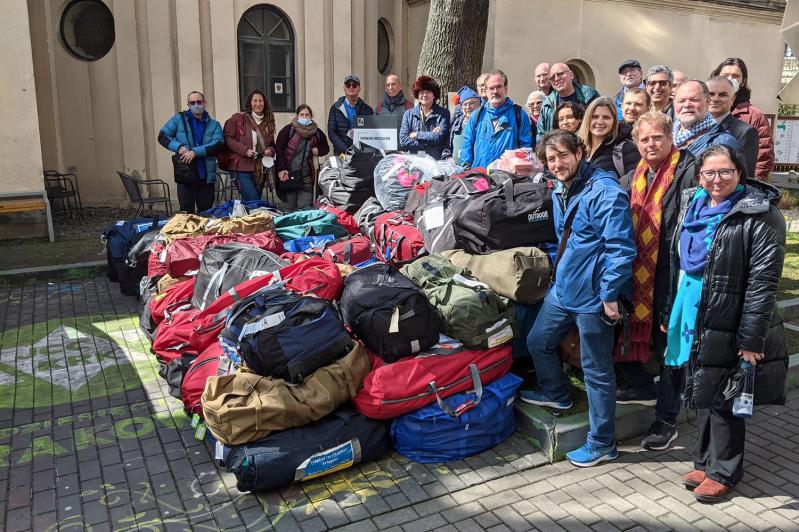 Rabbi Joshua Franklin of the Jewish Center of the Hamptons, in front, traveled to the Polish-Ukraine border with a delegation of rabbis from Israel and the United States. They arrived with significant financial donations and several tons of much-needed supplies for Ukrainian refugees.
Courtesy of Joshua Franklin
By Judy D’Mello

“We’re out of rape kit sutures,” a trauma aid worker, on the Polish-Ukraine border, told Rabbi Joshua Franklin of the Jewish Center of the Hamptons. “And, you know, when you hear something like that, you barely need to hear any more,” Rabbi Franklin said this week. “But it’s indicative of the extent of trauma that Ukrainians have dealt with.”

The rabbi recently returned to East Hampton following six days in Poland, where he met with, and listened to, Ukrainian refugees, as well as helped international crisis workers in the towns of Krakow, Medyka, and Przemysl, which sit near the border of Ukraine.

There were many heart-wrenching stories, the rabbi said, during a phone call this week. He relayed one about a woman who fled with her 5-year-old daughter while her husband remained in Ukraine to fight. The woman told Mr. Franklin that her daughter wakes up every night screaming and hysterical. And then, the rabbi said, she told him something he thought he had misheard.

“I show my daughter pictures. I want her to see what is going on. And I want her to be able to understand why we’re so angry at the Russians. I don’t want my daughter ever to speak Russian. I want to teach my daughter how to hate Russian people,” the woman told him.

According to the United Nations, as of April 25, more than 5.2 million people have fled Ukraine since Russia’s invasion, creating the greatest refugee crisis in Europe since World War II. Poland has taken in almost three million refugees. Yet, remarkably, there are no makeshift refugee camps in Poland, so far, largely because of the efforts of charities, religious organizations, businesses, individuals, and government officials that have mobilized to help provide food, shelter, and psychological support for the sudden and massive influx of people. Refugees have been housed in the center of cities in homes, spare bedrooms, basements, hotels, warehouses, and convention centers.

Rabbi Franklin traveled to the Polish border towns as part of a delegation of about 25 American and Israeli rabbis. Once in Poland, they partnered with the Jewish Community Center of Krakow.

“We brought over $115,000 that was raised by the Hamptons community, and the primary beneficiary is the J.C.C. of Krakow,” he said. “The J.C.C. was your typical Jewish community center with programs for its members, and classes, and dinners. But when Feb. 24 hit, they transformed their whole identity to become a refugee service center.” He explained that the center provides food and shelter to over 300 people each day and helps to find lodgings in apartments and hotels. It offers Polish classes for Ukrainian refugees, free day care, as well as psychological assistance to people who have lost almost everything.

In Przemysl, less than 10 miles from the Polish-Ukrainian border, the city’s mayor told Mr. Franklin that its population of 65,000 virtually doubled overnight. Somehow, the city found a way to absorb the inundation within its limited infrastructure.

“I will say that the way Poland has been handling the Ukrainian refugees is really an example in the modern world of what a nation and its people can do in order to be supportive of a refugee population,” Rabbi Franklin said, and then added, “That’s the heartwarming side of the story. The way the Polish people have raised the bar exceedingly high in terms of what it means to welcome refugees into your home and how to treat people who are afflicted.”

The rabbi also made time during his trip to get together with East Hampton’s Mark Smith, the restaurateur and partner in Honest Man Hospitality, a consortium of local eateries, who was volunteering in a neighboring refugee center with World Central Kitchen, a nonprofit humanitarian organization.

“Mark and I have partnered — through the Jewish Center and the Honest Man group — on a number of really great social action projects in East Hampton. So, to be able to have this little link with him in Poland was really special,” Mr. Franklin said.

While the rabbinic delegation also provided hands-on aid at the refugee centers it visited, Rabbi Franklin’s main goals for the trip were always to listen to the stories of refugees, to offer them support, to let them know that the world hasn’t abandoned them, and to ultimately bring the stories back home to the people of East Hampton.

“There were nights that I didn’t sleep when I was over there and it wasn’t because I was jet-lagged. It was because I had all of these stories running through my head and they were very difficult to process,” he said. “There was a real desire to try and understand and absorb a little bit of the trauma, the experiences that the Ukrainians were going through.”

Many of his stories will be shared this evening at 6, when Rabbi Franklin will reflect publicly about his refugee mission to Poland during the Jewish Center’s Yom HaShoah service. It’s open to the public, but proof of vaccination is required.

Mashashimuet Park's History and Future
A Conference for Young People to Create Solutions
Get Outside, Get Moving
END_OF_DOCUMENT_TOKEN_TO_BE_REPLACED