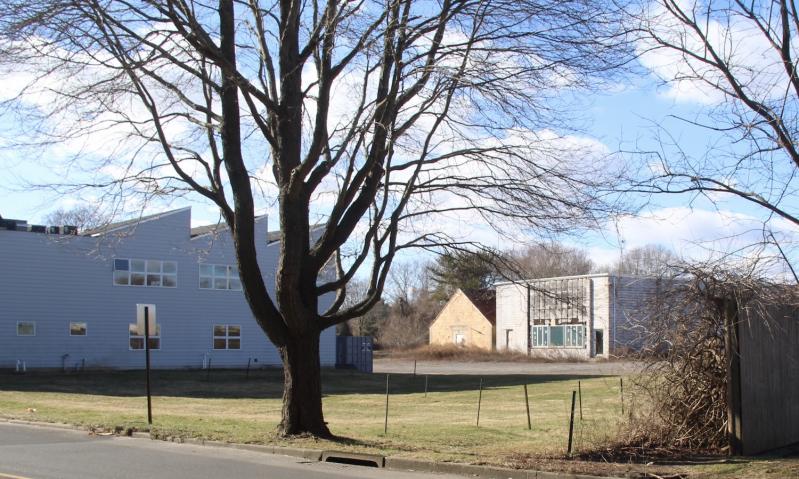 "I’m not against a brewpub. I think their whole concept is a great idea. The only problem is that they’re trying to build it in the wrong place," said Michael Aaron of a proposal for a brewery and restaurant on Toilsome Lane in East Hampton.
Durell Godfrey
By Christopher Gangemi

In August, representatives of the Mill Hill Realty Corporation, which seeks to build a two-story brewery and restaurant, tasting area, and outdoor beer garden at 17 Toilsome Lane, went before the Design Review Board. Without much fanfare at the time, Tom Preiato, the village’s principal building inspector, said no variance was needed and that the proposed uses were consistent with the zoning of the property, which is “light commercial.”

After catching wind of the proposal, however, several neighbors were upset and alarmed at the speed with which the project seemed to be moving forward. They organized, and by September, led by Michael and Christine Aaron — who own 19 Toilsome Lane, the house adjacent to the site — they filed an appeal with the village’s zoning board of appeals.

“I’m afraid they’re overstepping their bounds before they even build the place,” said Mr. Aaron over the phone last week.

The neighbors’ appeal argued that Mr. Preiato had incorrectly interpreted the zoning code. At the heart of the conflict is whether or not Mill Hill’s proposal is for a restaurant, which is allowed at that location, or a tavern/brewpub, which is a use that is not currently defined in the village code.

“When I first bought my house,” said Mr. Aaron, “there was a restaurant across the street called the House on Toilsome. I would not object to a restaurant and the restrictions that a restaurant has. I’m not against a brewpub. I think their whole concept is a great idea. The only problem is that they’re trying to build it in the wrong place.”

The Z.B.A. heard the appeal in January, and by their meeting on March 11 had denied it.

“[W]e reach the inescapable conclusion,” the board wrote in response, “that the building inspector’s statement at issue herein cannot, as a matter of law, be deemed an interpretation of the provisions of the Code of the Village of East Hampton subject to appeal to this board.”

Basically, the board determined that Mr. Preiato’s statement — when he stood up at the D.R.B. meeting in August and said that the use was allowed — was not a legal interpretation or determination of the village code. The fact that he never filed a determination with the village clerk also spoke to the unofficial nature of his comments, the Z.B.A. argued. In essence, the Z.B.A. ruled, he was just talking.

But the Z.B.A. was careful to note that even though they declined the appeal, it did not mean that the Aarons could not challenge any future code interpretation, further down the line. The board did not reveal, one way or another, if it felt the proposed brewery restaurant was an appropriate use in that area.

To the Supreme Court

The latest twist is that Michael and Christine Aaron are now appealing the Z.B.A.’s decision in Suffolk County Supreme Court. They are asking the court a few things. First, they want the court to acknowledge that Mr. Preiato did make an interpretation of the village code at the D.R.B. meeting in August of 2021, and that that interpretation of village code was wrong.

Second, and perhaps of greater import, they are asking the court to declare “that a tavern, restaurant/bar, beer garden and brewery is not a permitted use in the manufacturing-industrial zoning district in the village of East Hampton.”

If the court were to side with the Aarons and declare the use impermissible, that would override any village determination. However, whether the court is comfortable with such a ruling remains to be seen. And should they make that ruling, Mill Hill Realty would appeal the decision.

The Aarons’ appeal also asks the Supreme Court to question the Z.B.A. about what information Mr. Preiato had in order to even make his determination. The Aarons feel strongly that Mr. Preiato had not studied the Mill Hill application. They argue that because a high percentage of the project’s projected revenue would come from the sale of beer, that it would clearly not be a restaurant.

The appeal also tasks the court with asking the Z.B.A. to explain its reasoning for declaring that Mr. Preiato had not made an official determination at the August D.R.B. meeting.

It could take months for the appeal to move through the court system, according to Michael G. Walsh, the attorney representing the Aarons. Meanwhile, they have asked that the application not be heard by the D.R.B.

Should they see any signs of construction or work on that site, said Mr. Walsh, they would have the court issue a preliminary injunction.

There are several ways this could play out. The Supreme Court could deny the Aarons’ petition, essentially agreeing with the Z.B.A. that no determination was made in August, and the application would proceed to the D.R.B. at which point the Aarons could challenge it again.

In short, the near future of the Toilsome Brewery is tied up in the courts. Odds are poor that customers will be enjoying craft brew in the lot off Toilsome Lane this summer. The dispute could, perhaps, even stretch out beyond the summer of 2023. The future of craft beer on Toilsome Lane rests not just on a code determination being set, but on it being legally upheld.

The Supreme Court has asked all the documents concerning the appeal be submitted by May. 7.