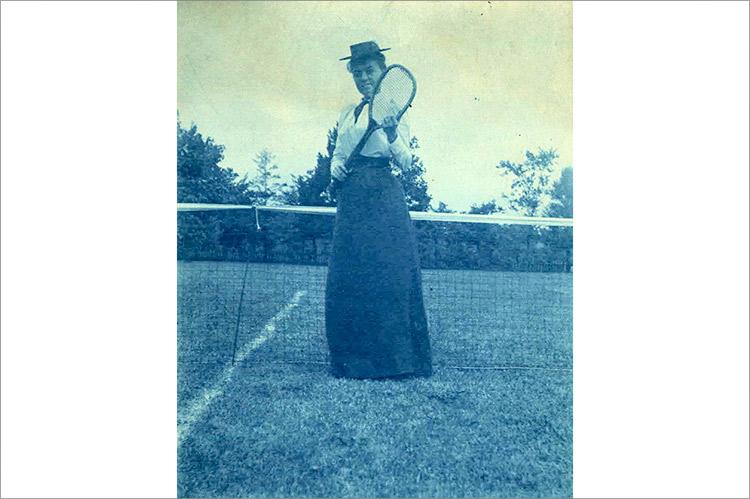 This cyanotype shows Grace Binney Winkley Wilson (1862-1952) posing with a racket on a grass court, a tennis net directly behind her. A cyanotype, an early type of photographic process invented in 1842, was safer and easier to use than the previous silver-based photographic processing. Cyanotypes were most common between 1880 and 1920, according to the American Institute for Conservation.

Wilson and her husband, Henry Burgoyne Wilson (1845-1896), spent summers in East Hampton between 1891 and 1895. During their time here, Henry often would leave Grace to attend to business in New York City and Paterson, N.J., where he was a silent partner with Lambert Mills (then Dexter, Lambert & Co.) from 1868 until his death. In East Hampton, Grace stayed with the couple’s children, Helen Winkley and Henry Burgoyne, who was known as Burgoyne.

Grace’s father died within two years of her birth, and she was brought up by her grandparents in Brookfield, Mass. She and Henry married in Massachusetts in 1882.

The Wilson family followed a high-society sporting lifestyle, evident in many of their photographs, which show the family swimming, at the beach, riding horses, and playing tennis. Grace is pictured here probably between 1891 and 1893 in a “tennis costume” that reflected the period’s expectations for attire. Today it’s difficult to imagine playing tennis in the summer in a full-length skirt with a corset and white shirtwaist, let alone returning a serve while wearing such a wide-brimmed hat.

The location of Grace’s lawn court is unknown, but the book “Fifty Years of the Maidstone Club” indicates that the East Hampton Lawn Tennis Club, which had more than 90 members, used early courts in an apple orchard near the Circle. When the Maidstone Club opened in 1892, Henry B. Wilson was listed among the first members, which would have given the Wilsons access to 12 tennis courts, including lawn courts, created by Charles Mott, a local landscaper.

A Conference for Young People to Create Solutions
Get Outside, Get Moving
Two Traditions, One Fair in Springs
END_OF_DOCUMENT_TOKEN_TO_BE_REPLACED