‘No jurisdiction’ over changes that concern many 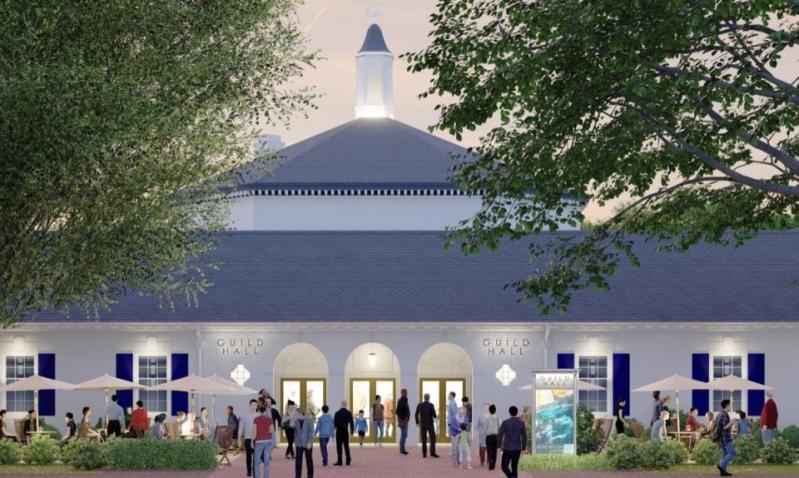 While much discussion about the renovation of Guild Hall has centered around interior issues, specifically the John Drew Theater, at last week’s East Hampton Village Zoning Board of Appeals meeting, at which Guild Hall sought a special permit and variances needed to make the changes, the board strove early on to focus comments only on the exterior of the building and grounds.

“There’s a lot of callers on the line, and a lot of the callers are calling about the inside of Guild Hall, over which we have no jurisdiction,” Phil O’Connell, chairing the meeting in the absence of John McGuirk, said to Andrea Grover, the executive director of Guild Hall. For example, “it doesn’t allow us to govern the ceiling of the theater,” he said. He suggested she address the concerns of those callers directly.

Ms. Grover provided her email address and phone number. “I’m happy to take calls and questions” about the interior, she said.

With that, the conversation flowed easily. Lenny Ackerman, the lawyer representing Guild Hall, acknowledged, “It’s understandable there’s significant community interest” in the project. All agreed that Guild Hall, in conjunction with the library and Town Pond, acts as an entrance into East Hampton Village, and helps set the mood of the place.

Peter Pennoyer, the principal architect for the renovation, touched lightly on the exterior changes to the building, “We’re not really changing anything. I’d say we’re bringing back what Aymar Embury would regard as the most important elements in the design.” Aymar Embury first designed Guild Hall in 1931.

The exterior work, he explained, was focused on accessibility and “weaving the building back into the village in a more presentable way.” To that end, work to improve and expand the parking lot off Pondview Lane was an important aspect. “Parking just simply rolls right into the road,” said Mr. Pennoyer. “There’s no proper path.”

The footprint of Guild Hall will not change. Egress would be added so that there would be natural light in the basement offices. They will clear up the rear yard, “a hodgepodge of equipment and tarps,” by “building a discrete simple storage shed” that would be completely screened off by hedges, said Mr. Pennoyer.

Ed Hollander, the landscape architect, said that the plan was to “restore and improve aesthetics for the building and streetscapes” and to also reduce stormwater runoff, plant native vegetation, help the birds and bees, and make the landscaping “as green as we can.”

Several neighbors and artists called in general with support for the renovation. Ann Rose, who lives at the corner of Main Street and Pondview, one of Guild Hall’s closest neighbors, said, “Good lighting, and good landscaping, make good neighbors.” Ms. Rose was “happy how sensitive and discrete their new lighting plan will be.” She said the addition of trees and greenery would be a huge improvement to the area. The small detail that made her happiest was that in lieu of grass, Guild Hall would plant native groundcovers.

Sarah Jo Strickland runs the Hampton Ballet Theatre School and explained that her school uses Guild Hall for two performances a year. The children spend many hours on the grounds between performances and their safety is important to her. Any improvement regarding parking, and the walkways, she fully supported. She also appreciated improved accessibility to the gardens. “To have a place where we can go outside and take a break from the theater and sit in a beautiful garden is a plus,” she said.

The lone dissenting phone call came from Helen Harrison, who “as a former curator of Guild Hall” asked for a “different approach” when it came to the renovation of the theater. However, since the theater was out of the purview of the Z.B.A., it wasn’t clear if her criticisms made sense in that forum. She argued that the zoning board took a role in approving the John Drew Theater back in 2006, and therefore did have at least some jurisdiction.

The board also received a number of letters in favor of or against the proposed changes. One, from Averill Geus, an East Hampton resident, pleaded “do not allow its facade to be turned into a Parisian cafe with tables and chairs.”

Other neighbors called in support, extolling the “thoughtfulness” of the exterior renovations and, perhaps showing that restaurants and taverns aren’t the only way to create life in a village, expressed hope that it would add vitality to that portion of Main Street.

If there was a sticking point it had to do with the tables and chairs referenced in Ms. Geus’s letter. Joe Rose, a board member, asked Ted Hollander, the landscape architect, to speak about it. Mr. Hollander explained that the idea was to “bring life to the street a little bit.” Mr. Pennoyer said, “Frankly, during intermissions there’s not enough room for the audience.” Especially the elderly, he said. “We see people sitting on the ground out there now.”

Carrie Doyle, a board member, wanted to be clear about the tables and chairs. Would they be used for dining?

The chairs, Ms. Grover explained, are to alleviate the crowding inside during intermissions. “The theater has over 300 seats, the lobby has a capacity of under 100. . . . This is a way, during nice weather, to have people flow outside. It’s not meant to be a food service area, or an area that’s active all the time,” she said.

Mr. O’Connell wondered why people couldn’t be sent toward the back garden area. He worried about people congregating in the front of Guild Hall when no show was on. Mr. Hollander said the chairs would only be put out when a show was on, they would not be out “in perpetuity.”

Mr. Pennoyer added that the access to the garden is relatively restricted. “It’s one door at the end of a corridor,” he said. It would be hard to direct 300 people that way.

Mr. O’Connell proposed a restriction covenant. “Can we make part of this issuance of a special permit [that] the front area will not have ‘sound events’ and that the tables and chairs will only be put out if there’s a concert happening?” he asked. “I think that’s the sticking point on the application.”

A special permit is required by village code when buildings containing public, private, institutional, and charitable uses, including museums, are constructed or altered.

“We’re not planning to have any kind of performances in front of the building,” said Ms. Grover. As for the tables and chairs, “I would be very grateful if we could have them out when the museum is open,” she said. “We’re not open late” — Guild Hall closes at 5. To bring chairs out and take them in throughout the day with a limited staff, she said, would be difficult. “But certainly, when the museum is closed, we wouldn’t be leaving them out.”

The board agreed to work with Ms. Grover, Mr. Ackerman, and the village attorney, Vincent Messina, to develop proper language and parameters restricting the use of the chairs in the front of the building. Once approved by the zoning board, Guild Hall still needs to go back to the design review board. Mr. O’Connell said the hearing would remain open for written submissions and most likely the project would be voted on at the next meeting.

A Conference for Young People to Create Solutions
Get Outside, Get Moving
Two Traditions, One Fair in Springs
END_OF_DOCUMENT_TOKEN_TO_BE_REPLACED