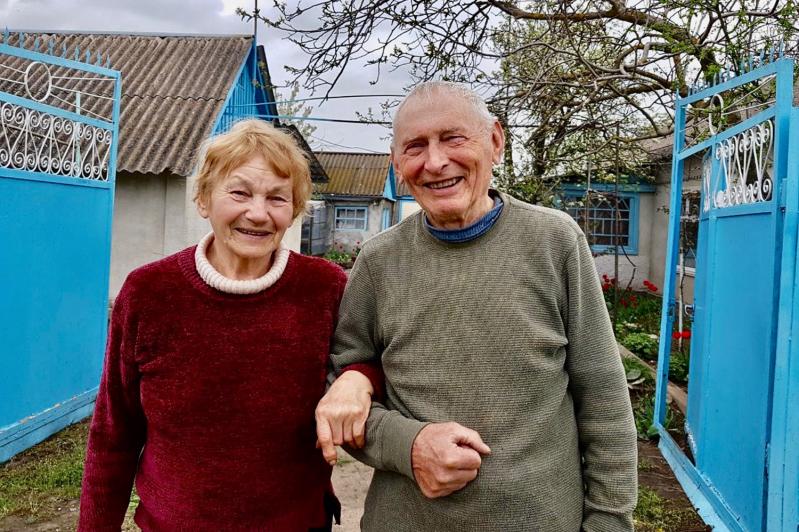 The irony of surviving World War II in Russia as a child, only to be attacked by Russia 83 years later, is not lost on Tamara Yaremenko, left, pictured with her husband, Dmitro Yaremenko, in the country's Mykolaiv region.
Yaremenko Family Photo
By Christopher Gangemi

“My mother can’t believe that her life started with war and, at 83, is finishing with war,” said Lena Yaremenko, a photographer who moved to Sag Harbor from Ukraine in 2003.

Her mother was born in 1938 and still remembers the end of World War II, when she was living in Saratov, Russia. “I talked with her this morning, and she was busy drying bread. She remembered the bombs and her hunger her whole life,” Ms. Yaremenko said. “She’s looking for a place to hide.”

Her mother lives about 40 minutes outside Mykolaiv, a city in southern Ukraine. The irony of surviving World War II in Russia as a child, only to be attacked by Russia 83 years later, is not lost upon her.

For most people, the news out of Ukraine is horrible, but it’s just news. Kyiv is 4,600 miles away from the East End. Other than a rise in prices at the gas pumps, our experience of what’s happening in Europe is muted and not real. But there are plenty of local residents who have direct ties to the beleaguered nation. People who are watching the slow-motion, 40-mile-long convoy of future death tear a hole through a country that their mothers, fathers, sisters, and brothers still live in.

Ms. Yaremenko’s daughter, Julia Kolomiyets, splits time between Sag Harbor and New York City. She lived in Mykolaiv until she was 13, but went to middle school at Pierson and graduated from Southampton High School. Mykolaiv, she said, is industrial. It’s a shipbuilding city and in a strategic location. Russian troops bombarded the city en route to Kyiv. Her siblings are there, with no way out. They have basics that could maybe last another month, she says, but the stores are empty apart from a few potatoes. “We don’t even know how to get food to them,” she said.

A childhood friend of hers wrote that she’s “too tired to be afraid,” and that she’s volunteering to fight with the Ukrainian Army. She is a girl with no military training, a regular person. The Ukrainian Army has set up a “special division of volunteers” for people like her, but Julia is afraid for her friend. She knows that tomorrow her friends and family may die, and there’s not much she can do.

Most important, she said, is that people realize that in the 21st century, “a war based on propaganda shouldn’t exist.” She encourages people to get in touch with anyone they know in Russia and let them know what their government is doing. “Information is our strongest weapon,” Julia said. To that end, she is very active on Instagram, where she’s been providing updates at @yulrusse, with news.

Anya Bimson lives in Montauk and works in the nail salon business. She moved there in 2019 after meeting her husband, Raymond, who works on a trawler. All of her family and friends are in Ukraine, she said. Her daughter’s father is a border guard in Mariupol, in southeastern Ukraine. Her parents live in Hrytsiv, a small rural village in the central western portion of the country, about four hours from Kyiv. ”Everybody has a garden, and animals — pigs, cows, and chickens.” Her family feels relatively safe, she said, “for now.”

Everything is in flux, though. While refugees from other parts of the country are trickling into her village, the local men “went to other regions to help.” she said. “Everybody is trying to help each other.” Her mother says they can get food for now, but the family is taking care of both of her grandmothers, one of whom is blind. Should food run out, they wouldn’t be able to leave. Her father, she said, is just happy that she is safe in Montauk.

Last week, Ms. Bimson was dining out with her 13-year-old daughter, Vira, a seventh-grader at the Montauk School. The waitress had an accent. Vira asked where she was from, and the waitress told them Russia. When the waitress found out Anya and Vera were from Ukraine, her eyes welled up and she began to apologize repeatedly for what’s happening. They all wept together in the restaurant.

“I don’t hate Russians,” said Anya. “Ukrainians and Russians are very similar, but at the same time very different. Ukrainians have their own language, culture, history. We want Russia and all the world to respect that.”

Like Julia, she said it was important that Ukrainians speak to their Russian friends and family. “Most conscious Russians do not support the policies of Putin, but they can do nothing,” Ms. Bimson said. There are political differences in Ukraine, but “this invasion really brought people together.”

Indeed, if people were previously divided along lines of faith, that division has lessened.

“Ukraine is predominately an Orthodox Catholic country and President Zelensky is Jewish. Yet all Ukrainians are calling him a historic figure,” said Father Alexander Karloutsos, the former Vicar General of the Greek Orthodox Archdiocese, who lives in Southampton. “All of us are looking up to him here. It speaks well of people being part of a pluralistic society. He wants to be a martyr, if necessary, for Ukraine.”

“Moscow’s territorial ambitions have eclipsed their concern for the people. Ukrainians and Russians are both victims. They should be united by common faith,” Father Karloutsos added.

Ms. Yaremenko showed a visitor a letter written by her niece, Irina, who fled Kyiv for Lviv. The trip, which usually takes six hours, took 20. “News comes almost every hour about rocket attacks, fights, help needed, relative and friend situations, updates from our government, wins and losses, ruined places, caught enemies, available shelters and where they’re located, curfew time updates, found enemy markers for missile attacks and how to disable them, infiltrated saboteurs, expected attacks, and many other things.”

That was just the first sentence.

The niece described a surreal situation and the frustration of talking to Russian relatives, some of them “brainwashed from watching Russian TV.” Perhaps that sounds eerily familiar to Americans in 2022, who might feel as if they’re living in separate realities depending on which channel they watch, which feed they subscribe to. “Putin dreamed of splitting Ukraine,” the niece wrote, “but he actually united it.”

On Tuesday night, talking about the war in Ukraine at his State of the Union address, President Joe Biden received a standing ovation from both sides of the aisle. Could Putin, with his naked aggression, help unite America as well?

Alina Kolybaba is a nurse at Stony Brook Southampton Hospital. She has a husband and a son, and is soon expecting another. Her parents, grandmother, and a brother live near Chernivtsi in southwestern Ukraine. Western Ukraine is seeing less direct combat at the moment, but it is being getting flooded with refugees from the east. The village where her family lives is small, only about 2,000 people. “They have food in stores, but they don’t know for how long,” she said.

“It doesn’t matter where you live,” she said. “It’s terrifying. Even me being on the other part of the globe, it’s just heartbreaking.”

Ukraine doesn’t need soldiers from America or Europe, said Ms. Kolybaba. “We are strong people ourselves. We have a will to fight for our country. We just need something to fight with.” She urged people to help in any way they could. “Putin is a threat not only to Ukraine but to the whole democratic world.”

“When I don’t have a connection with my parents, I feel completely terrified,” said Ms. Yaremenko. “But now is the time to be strong, brave, and act. Crying isn’t an action. I’m not going to let Putin destroy my life here, as he is destroying lives in Ukraine.”

Mashashimuet Park's History and Future
A Conference for Young People to Create Solutions
Get Outside, Get Moving
END_OF_DOCUMENT_TOKEN_TO_BE_REPLACED