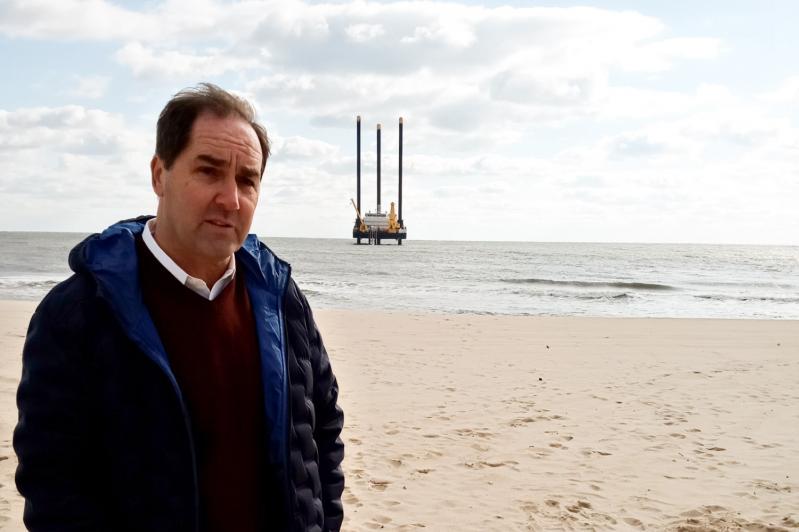 Is that Poseidon’s triton reaching from the littoral shallows, or are you just trying to build a 132-megawatt wind farm?

The South Fork Wind project site at the end of Beach Lane in Wainscott certainly gives pause, if not a shudder of megalophobia. Three intimidatingly large steel pilings jut into the sky just off the beach, while nearby, drills continue with the jarringly loud work of drilling a horizontal tunnel from a cable tie-in near the Long Island Rail Road line to the north to the workers’ barge just offshore, temporarily anchored by the pilings.

Troy Patton, head of program execution, Americas, for Orsted, which is building the wind project via a 50-50 partnership with Eversource, was on the scene last week to give an update on the project, which will see the installation, 35 miles to the east off Montauk, of a dozen 11-megawatt wind turbines. The turbines will tie in by an undersea cable, to the land-ho connection point in Wainscott.

It’s a windy Thursday afternoon, but not as windy as the day before. “We like the wind,” Mr. Patton said as he updated reporters on what has happened to date.

“The drilling is well underway,” he said, walking to a point on the beach which, he said, was the approximate spot where the drilling has reached.

If all goes according to plan — and so far it has, with some delays — the workers’ rig sporting those intimidating support pilings will be a memory by February, when work here is completed.

Mr. Patton checked off a number of topics of interest during a bitingly cold afternoon press conference, among them the broader political debate over wind farms that goes beyond Donald Trump exclaiming that all they do is kill birds. Ironically, wind farms dominate the skyscape in large parts of red-state places like Texas, Iowa, and Wyoming, but it took bluish New York decades to get to its first offshore wind project, given pushback from, among others, the region’s robust commercial fishing industry and, nearby in Wainscott, the Republican billionaire Ronald Lauder, who just spent some $2 million backing Lee Zeldin for governor.

“I’d say to Mr. Lauder, why don’t you give it a chance,” said Mr. Patton, as he spoke of an aging American energy infrastructure “that needs to be replaced, and you have to replace it with something.”

Commercial fishing interests in New York State have blamed the advent of a robust if nascent North American wind farm industry for everything from unearthing unexploded World War II bombs to killing fish larvae by the billions in their effort to block the construction now underway. This project is one of six in the Northeast and the Mid-Atlantic region undertaken by Orsted.

Of the broader political issues swirling around wind farms, Mr. Patton noted that Gulf states like Texas and Louisiana are enjoying the economic fruits of the East Coast wind farm rollout.

A substation ship three times the size of the workers’ boat off Beach Lane is now under construction by the company Kiewit, based near Corpus Christi, Tex. That ship, to be christened the Charybdis, is to be stationed permanently off Montauk Point next summer.

Job opportunities are exploding everywhere in the industry, Mr. Patton said, and Orsted has been steadily growing its ranks of American workers from “all walks of life,” including a former Pizza Hut employee and a retiring worker from the oil industry, who he said “wanted to get clean and green.”

Mr. Patton came to Orsted after serving in the Navy and working for General Electric. He lived for decades in Denmark, and predicted that the complete transition from fossil-fuel energy will take at least 20 years and perhaps as many as 35. “You don’t want to shock the system,” he said.

In a project update sent out last week, Orsted provided more details on the drilling now taking place in Wainscott. Upcoming is the so-called “conduit pull‚“ where cable will be put in place around the casings now going in off Montauk and beneath Beach Lane.
--
Correction: An earlier version of this story gave an incorrect location for the wind turbines. They will be some 35 miles off Montauk. In addition Troy Patton was given the wrong title. He is head of program execution, Americas, for Orsted.