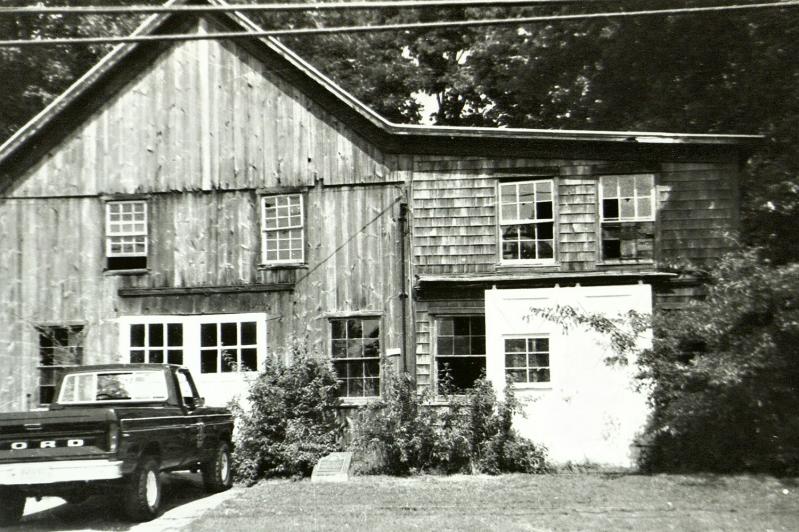 This photograph from the C. Frank Dayton Photograph Collection shows the exterior of the blacksmith shop of Charles Silas Parsons (1858-1926) before its relocation and restoration.

Charles was born in Springs on April 1, 1858, the oldest of the seven children of William Parsons (1832-1919) and Mary Jane Williams (1834-1917). His father was a fisherman, an occupation that some of Charles’s brothers pursued as well. The family also had a farm at their residence.

In the later months of 1886, Charles Parsons moved out of the family home and began working on his blacksmith shop. He received a lumber shipment on the sloop Maria to finish the construction. The East Hampton Star reported on Oct. 16, 1886, that “Charles Parsons’ new blacksmith shop is about completed and he will soon be ready to attend to the wants of his neighbors.” The following month he married Mary Emeline Talmage (1853-1944), and they honeymooned in New York City for several days.

As a blacksmith, Parsons provided the community with horseshoes, wheels, and even bobsleds. In 1887 he spent a few days at Gardiner’s Island doing work in his trade for the Gardiner family. In 1904 he was asked to build an automobile wagon featuring a five-horsepower engine and steel tires for Peter Koppleman from Fireplace. Parsons was deemed “the Edison of Springs” for his ability to create things, similar to the great inventor Thomas Edison.

Parsons became ill sometime in August of 1926 and died at Southampton Hospital on Sept. 25 of that year.

The Springs Historical Society raised money to relocate and restore the Parsons Blacksmith Shop. Originally it stood on Fireplace Road, and then was moved between Pussy’s Pond and Accabonac Creek, alongside several other 19th-century buildings well known to Springs. The restoration came shortly after fund-raisers in 1984.