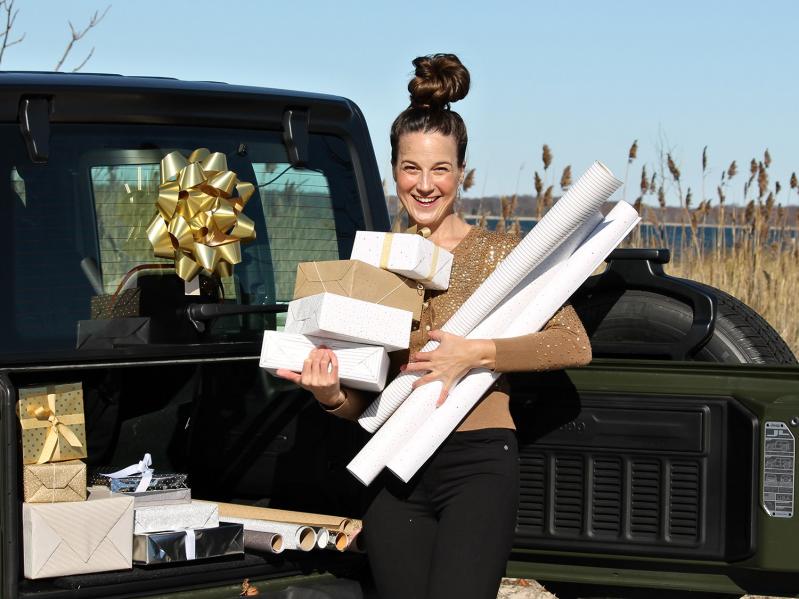 Santa has a brand-new helper this year. Her name is Ashley Anne Boer and she drives a Jeep Wrangler.

Ms. Boer, a Sag Harbor floral designer and artist, is branching out for the holidays with a mobile gift-wrapping service called Wrapping Wrangler. She came up with the idea after working in high-end retail for four years in East Hampton Village and experiencing, upon the store’s discontinuation of gift boxes, request after request from customers seeking quick but beautiful gift-wrapping solutions.

Not just a visual merchandiser, she was also known to decorate the store for the holidays, leading to the theory that she may secretly be part elf. “Once, I made a giant paper chain that I strung throughout the staff break room,” she said.

Ms. Boer’s clean, artfully minimalist aesthetic is based in her childhood growing up on a peach farm in California and then studying sculpture at Hope College in Michigan.

She soon moved to New York City, where she began working as a fashion photography assistant for magazines including GQ and Cosmopolitan. At the latter publication, she found herself appreciating closets full of color, but something was still missing. “It took a bit of time to realize I was craving creativity and to be making something with my hands again. I feel most fulfilled when creating something with my hands,” she said.

In 2015, her next stop on life’s adventure was Sag Harbor, where she has made a name for herself with sophisticated but whimsical floral arrangements for events and local shops. It was Arthur Golabek, a friend and fellow entrepreneur, who recently encouraged her to start a business.

Whereas even the most experienced gift-wrapper may find herself struggling with folding and securing the sides of a gift, that’s Ms. Boer’s favorite part. “It’s the same as the construction of an envelope. Wrapping paper cannot be cut too long or too short; it has to be just right for the side folds to fit and finish off the wrapping with a crisp precision.”

Those who engage her services can choose from several color palettes: Winter Wonderland White, Gorgeous Gold, Stunning Silver, Radiant Rosegold, Metallic Medley. There are options to mix ‘em up, along with a Brown Paper Packages Tied Up With Strings option for those who are concerned about sustainability, as conventional wrapping paper is not recyclable.

“I am very excited about working with wrapping paper and appreciate the similarities to flowers. Both require an exact cut . . . and just as a flower can bruise, wrapping paper can wrinkle and crease,” said Ms. Boer, who also often gets compliments on her playful handwriting style and finishes gifts with a handwritten tag.

Samples of Ms. Boer’s wrapping handiwork will be on display at Estia’s Little Kitchen. Those who are interested in learning more can visit her Instagram page, @wrappingwrangler, or send her an email at [email protected].