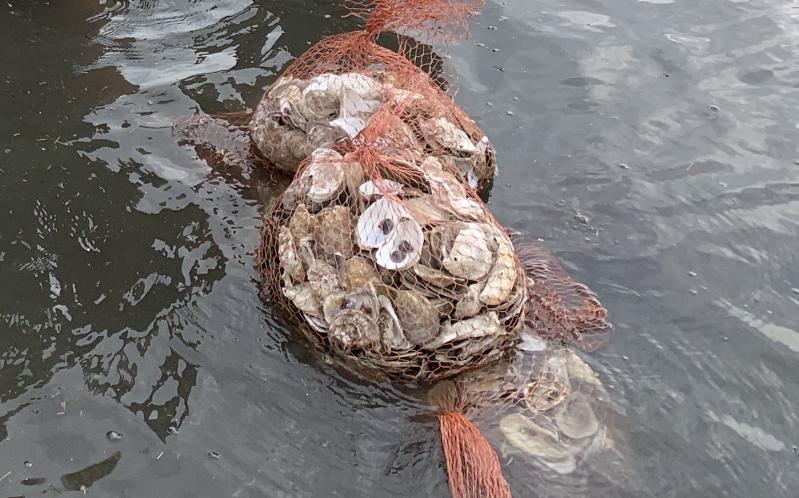 Recycled oyster shells are placed in mesh bags. When the oysters are ready to “set,” oyster larvae are added to the tank, “along with micro-algae that they like to eat,” explained Kate Rossi-Snook Cornell Cooperative Extension's Back to the Bays aquaculture coordinator.
Durell Godfrey
By Tom Gogola

East Hampton Town has given its blessing to a second spat-on-shell oyster reef restoration project in Lake Montauk, proposed by the Cornell Cooperative Extension’s Back to the Bays program.

The pilot program, to be undertaken on town-owned bottomlands on the east side of the lake, will be its second such oyster reef. The first, also proposed by Back to the Bays, installed more than 100,000 spat-on-shell oysters in waters off Gurney’s Star Island Resort in 2020.

On Nov. 3 the town board endorsed the new proposal, noting that the project was part of a “larger effort for long-term restoration of aquatic benefits in Lake Montauk, which has benefits for both coastal resiliency and water quality improvement.” Board members pledged to provide a letter of support to the nonprofit Riverhead-based cooperative extension, endorsing its application for approval to the State Department of Conservation.

The D.E.C.’s anticipated go-ahead is the last hurdle before the project can proceed. “We’re waiting for final approval from the D.E.C., said Kate Rossi-Snook, the Back to the Bays aquaculture coordinator.

The environmental benefits of the proposed oyster reef are multifold, said Ms. Rossi-Snook, to say nothing of the delectable bivalve’s slurp-worthy appeal. The reef-restoration process starts in a remote setting, in a Riverhead tank, using oyster and clam shells collected from restaurants.

The recycled shells are placed in mesh bags. When the oysters are ready to “set,” oyster larvae are added to the tank, “along with micro-algae that they like to eat,” Ms. Rossi-Snook said.

Within a week, she said, the larvae affix themselves to the shells, where they grow and “produce this 3-D structure that creates the reef. It’s like a coral reef, just not as colorful.” The reef, she said, provides all sorts of “nooks and crannies where fish can hide.”

Ms. Rossi-Snook also highlighted oysters’ olympian ability to help clean up the water, noting that an adult oyster can filter up to 50 gallons of effluvia-spiked water a day.

In the warmer months, Lake Montauk experiences elevated levels of enterococcus bacteria, which can cause illness in humans. The D.E.C. has closed three areas of Lake Montauk to shellfishing from May 1 to either Oct. 1 or Nov. 1, including a shorefront piece of bottomlands on the east side of the lake.

“But it’s not just about the water quality — the reefs are an incredibly crucial habitat,” said Ms. Rossi-Snook, that can also help mitigate storm surge, which is becoming all too common in a globally warmed world.

A similar project has been undertaken in Accabonac Harbor, Springs, by the organization South Fork Sea Farmers.

Clam and oyster shells are made of calcium carbonate; the idea is that oyster larvae will latch onto the shells, which are then returned to the water. “If you get enough of these shells back into the water,” said Ms. Rossi-Snook, “it actually combats acidification.” (Oysters: The Tums of the Lake, she suggested.) “Plus, we’re taking valuable material that would otherwise wind up in a landfill, and using it.”

The impetus for this second oyster reef on Lake Montauk came from private waterfront homeowners who have access to the lake from East Lake Drive. Earlier this year, she said, several of them, concerned about the D.E.C.’s harvest closures, contacted the cooperative extension “wanting to know how they could help.”

The proposed new reef is part of a broader Back to the Bays vision of a “living shoreline network,” Ms. Rossi-Snook said, one that would provide a critical, all-natural buffer zone to global-warming impacts. “We are trying to get people to lean in this direction — instead of adding bulkheading,” she said.

Ideally, it is hoped to “get the spat-on-shells out to the lake by the end of the year.”