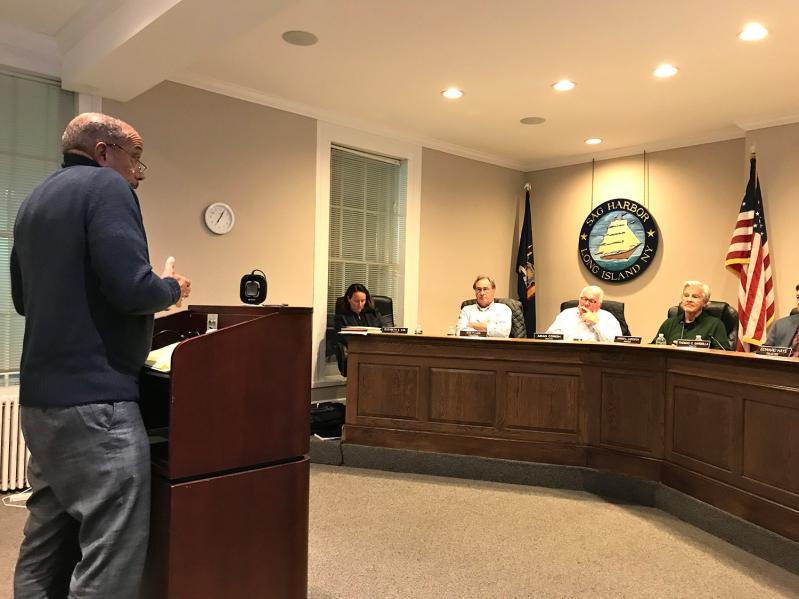 Residents of Sag Harbor’s historically Black neighborhoods, Azurest, Ninevah, and Sag Harbor Hills, showed up in force at a village board meeting Tuesday night for a public hearing on whether to create an overlay district for those neighborhoods, as a means of preserving their character in the face of recent development trends.

The proposal, which would amend the village code, calls for a maximum house size of 4,000 square feet, no sidewalks or “impervious” paved driveways, and a maximum of three accessory structures for any one house. Importantly, a photograph or video evidence of a suspected violation in the overlay district would be enough to “warrant the institution of an investigation by the village.”

While a debate has raged publicly since August about the best way to preserve the neighborhoods, in the end, all residents, including Renee Simons, president of the SANS organization, spoke in favor of the overlay district.

She did so only after receiving assurances from the New York State Historic Preservation Office and the village that entertaining the law would “not conflict or pre-empt the contract responsibilities the village has to decide ‘yes’ or ‘no’ regarding the inclusion of the SANS area (with beach area included) into the village inventory of historic district properties.”

The neighborhoods are recognized by New York State and the National Register of Historic Places but have never been designated as such by the village, something that Ms. Simons has sought for years. She has long argued that historic designation by the village was the best means of preservation.

On the other side, a group calling itself the Tri-Community Working Group, comprised of the three presidents of the three communities, along with 14 residents, boasts that 95 percent of their residents support an overlay district to control development and preserve the community.

A draft of the law highlighted that the overlay district was not there to protect the houses, but more the sense of place. “What defined the look and feel of the three communities was not attributable to a particular architectural design or style. Instead, it was the sense of community and the close, familial relationship of the residents, and the rustic quality of size-appropriate homes set within treed lots unadorned by sidewalks or curbs.”

“Those who laid out lots did so to maximize the number of lots because they knew no one else would allow Black people to buy land and build on it,” said John Graves, a resident of Terry Drive. “The houses were modest only because Black residents didn’t have access to mortgage financing. If they had had access, they could have built larger houses.”

He said a house his parents had purchased in the 1990s had recently sold, “not because it was beautiful,” but because of how it could be renovated. Like nine others who spoke in favor of the overlay district, Mr. Graves feared historic designation by the village would add more stringent regulations and reduce the value of properties in the three neighborhoods.

Many spoke of the benefits of multigenerational homeownership in Sag Harbor. Shannon Terry Richards said, “I carry the names of two streets, in Azurest and Sag Harbor Hills — we are deeply tied to this village and these communities.” He supported the overlay district, saying “It is representative of the community and its involvement. The percentage of support is high.”

Mark Willis of Azurest said he was a relative newcomer to the neighborhood, who purchased his house in 2005. He has five children and said he chose to live in Azurest because after visiting for a summer, “within two hours the kids had lifelong friends. They walked out of the house, and there was a community where everyone was welcome. There are very few communities in the country that provide that type of atmosphere.”

Ms. Simons lodged a complaint about the name of the overlay district. “The SANS area is listed on the state and national registries. H.B.B.C. is not listed.” She urged the board not to erase “the SANS area listing and long-established nomenclature on village records.”

As she had in October’s meeting, she voiced concern that an overlay district was only code that could easily be changed, and pushed the board for a more permanent preservation. She called the overlay district “a second-class alternative.”

Sarah Kautz of Preservation Long Island called in to the meeting and said her organization supported the overlay district, but only because “anything is better than the situation we have now.” She asked the board to host a public hearing to consider adding the SANS neighborhoods to the historic district.

Liz Vail, the village attorney, said the public hearing concerning the overlay district would remain open for written comment until the board’s December meeting. Whether Ms. Kautz’s request for a separate hearing regarding inclusion of the SANS historic district would be considered was not discussed.