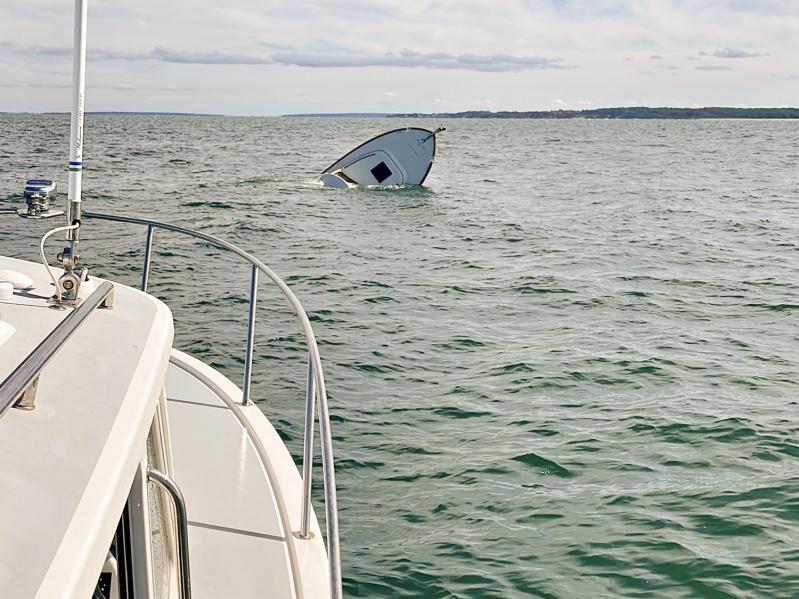 A high-end Hinckley downeaster experienced a major mechanical malfunction in Gardiner’s Bay last Thursday, but the boat’s captain escaped without even getting wet thanks to a couple of nearby good Samaritans out fishing for Spanish mackerel.
Mike Bulger
By Tom Gogola

It’s not every day that global warming plays a positive, if indirect, role in a sea rescue, but last Thursday may have been one of those days.

Mike Bulger and Eric Berkowitz were out fishing that afternoon on Mr. Bulger’s Endless Summer, a MJM 35Z, when they marked a school of Spanish mackerel at the Ruins, located off Gardiner’s Island. The fish is a pelagic species that’s been making its late-summer presence known locally in increasing numbers as ocean waters have warmed.

Seas were a little snotty that day with a strong east wind and few boats out on the water. Besides Endless Summer, one of those was a 2017 Hinckley that Capt. Bill Biebel was motoring from its summertime slip in Three Mile Harbor to winter dockage in Rhode Island on behalf of the boat’s owner.

But it was not to be. Mr. Biebel soon found himself in harrowing straits when a major mechanical malfunction set up a dramatic encounter with Endless Summer.

Mr. Bulger said he had planned to head east from Lake Montauk toward the Montauk Lighthouse, but conditions being what they were, instead hooked a left out of the Montauk Inlet after leaving the Montauk Marine Basin.

He first headed to Fort Pond Bay in search of false albacore, “then we were cruising up toward Gardiner’s Island,” he said, “and decided to take a nice leisurely stroll around Gardiner’s.”

The men were about a quarter mile from the Ruins in about 130 feet of water, Mr. Berkowitz said, when they came across a school of mackerel “boiling on the top water. We stopped to fish for a bit and watched a beautiful 34-foot Hinckley power on past us.”

As they cast into the rips around the Ruins, the two men thought they might have heard yelling and, scanning the surrounding waters, saw a man who appeared to be hailing them from the bow of the Hinckley.

“The Hinckley was a couple hundred yards to our east,” recalled Mr. Bulger, “and I thought, ‘What’s that guy doing?’ We thought we heard a yell — and then we saw him on the bow waving at us, and it looks like he has a life preserver on.”

They reeled up, Mr. Bulger revved his M.J.M. and zipped over to the Hinckley, whose transom was completely underwater when they reached it.

“As we got closer to the vessel it started to really take on water quickly and began to sink and slide underneath our bow,” recalled Mr. Berkowitz, who noted that the Hinckley is “probably worth just shy of a million dollars.”

Mr. Bulger maneuvered his boat so it was bow-to-stern with the Hinckley, not an easy task, he recalled, given the waves, the wind “and the current that was running so hard.”

Mr. Berkowitz then shimmied out to a spot where he could reach out to Mr. Biebel. The scene was not of a Michelangelo “Hand of God” order of magnitude, but still pretty awe-inspiring.

Mr. Biebel tossed his sea bag to the men and Mr. Berkowitz recalled “reaching for each other’s outstretched arms. Once we had a firm grim, he jumped, and I pulled him across to safety in our boat. Talk about being in the right place at the right time — there were no other boats at all within miles and miles of us.”

So what happened? Mr. Biebel recounted that he was about 20 to 25 minutes into the trip “when I heard a huge, huge bang.” He later learned that the boat’s jackshaft had experienced a “major mechanical failure,” which blew a hole in the hull when it failed.

“Within 15 seconds I was lifting the hatch and there was already a foot of water,” Mr. Biebel said. He was able to make a distress call to the United States Coast Guard Station in Montauk on the VHF, but the boat’s batteries, now immersed in saltwater, stopped working along with all electrical systems on the boat after that call, and he could not respond to the Coast Guard when they asked for details of his location and situation.

He then tried to call one of his crew members but “they didn’t pick up. Then I called the dockmaster from Three Mile Harbor, who called the Coasties and the police.” Within five minutes of the mechanical failure and those calls, he said, Mr. Bulger was on scene in his boat.

“It was pretty amazing,” recalled Mr. Biebel. “I stepped onto their boat — and never even got wet. In 50 years of doing this, this is the first time I’ve had to make that call.”

Mr. Biebel was a little circumspect on the question of whether he believed the men saved his life. He knew other rescuers were on their way, and also noted that he was only about 1,000 yards from the Ruins.

“It’s tough to say,” he said, “because everything fell into place so quickly. It would have been a different situation if I was 20 miles offshore. They saved me from getting wet, that’s for sure. I was really happy they were out there fishing when they saw that I was in distress and grabbed me.”

Mr. Biebel is a licensed captain based in Connecticut and Palm Beach, Fla., and graduated from the Massachusetts Maritime Academy in 1986. He says his training kicked in immediately upon realizing the fix he was in.

The Southold Bay Constable, Douglas Marine, and U.S. Tow were quickly on scene following the rescue.

East Hampton Town Marine Patrol got an emergency call about the incident too, but Senior Harbormaster Timothy Treadwell said his agency stood down once it learned of the other boats on scene. “We didn’t take any info for an event report at all,” he said via email.

The men took video of the boat as its bow bobbed in the current and before it was lassoed by TowBoat U.S. and brought to Greenport, where, Mr. Biebel said, it was up in the boatyard slings within hours of the accident, awaiting extensive repairs. Mr. Biebel also had to contact the owner with the difficult news.

“He was a little shocked at first — you hate having to make that call — but as everything set in he was kind of happy it was me on board and not him and his kids.”

For Mr. Berkowitz, the event presented a teachable moment. “A normal day on the water can turn into a life-or-death situation real fast,” he observed. “My fellow boaters, please be prepared,” he wrote, “it was a fluke that we happened to be in that area.”

Well, maybe not a fluke, but a Spanish mackerel.